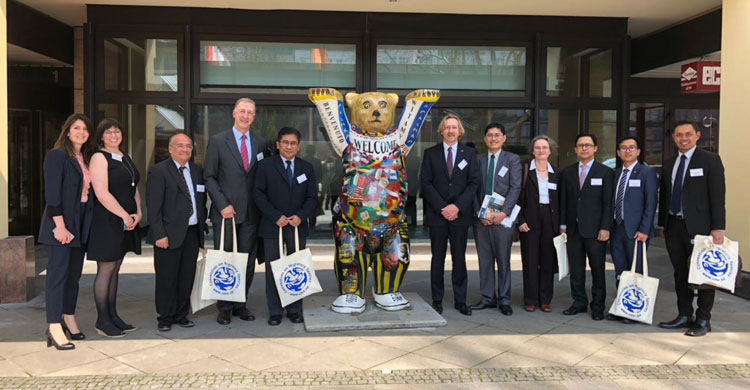 Embassy officials from countries in the South-East Asian region

Bonn/Berlin, 11 April 2018 – CMS Executive Secretary, Bradnee Chambers has been meeting high-level Embassy officials from countries in the Latin American and South-East Asian regions to promote accession to the Convention.

On 10 April, Chambers met representatives of El Salvador, Guatemala, Jamaica, Mexico, Nicaragua and Venezuela.  Also in attendance was a representative from Honduras, which has been a Party to CMS since 2007.

On 11 April, attention turned to South-East Asia, a region where the profile of CMS has been raised with last year’s Conference of the Parties hosted in Manila by the Government of the Philippines.  Diplomats from Cambodia, Indonesia, Malaysia, Myanmar and Vietnam were in attendance, along with the Philippines which as Host of the last COP is a member of the CMS Standing Committee.  The Philippines also sponsored the Resolution at COP12 that led to the adoption of the “Manila Declaration”, which recognizes the interlinkages between sustainable development and the conservation of wildlife.

“Conserving the natural environment – and that includes migratory species – is an important component of global efforts to achieve the Sustainable Development Goals.  CMS has a role to play in meeting the challenges of the 21st century; climate change, tackling pollution in all its forms, promoting safe renewable energy and wildlife tourism – are all on the Convention’s agenda.”

CMS currently has 126 Parties and a further 30 countries have signed other CMS instruments.  While membership of the Convention is almost comprehensive in Europe and Africa, there are still some gaps in other regions, particularly Central America and the Caribbean and South-East Asia.

The European Commission were recognized as Champion Plus for their generous support and commitment towards Building Capacity for Migratory Species Conservation for the period 2015-2018. This activity has been funded with the contribution granted by the European Commission under the Migratory Species Champion Programme and through the Global Public Goods and Challenges (GPGC Programme) Cooperation Agreements with UNEP.