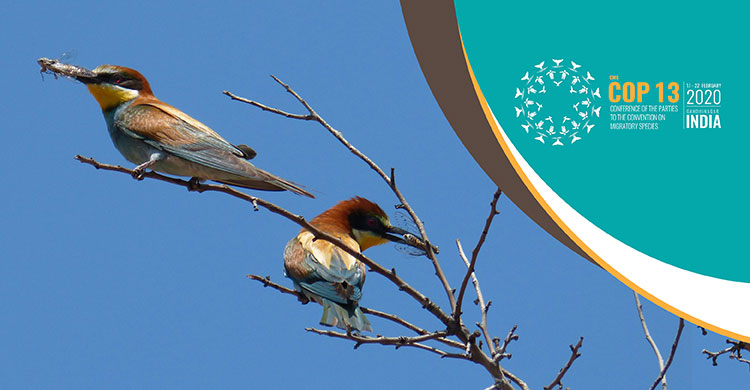 Bonn, 12 February 2020 - For the first time, insect decline and its cascading effects on migratory species feeding on them will be on the agenda of a CMS COP.

About half of all insect species are rapidly declining. A third face extinction, including generalist species which were once common and widespread. IPBES highlighted the dramatic loss of biodiversity and biomass in its global assessment report. A recent review of the drivers of insect decline has estimated that, at the current rate, 40 per cent of the world’s insect species might become extinct over the next few decades.

The European Union will be presenting its draft resolution and decision to CMS COP13 to better understand the insect die-off and its effects on migratory species and identify possible solutions to prevent further decline of insect populations.

The main drivers causing insect decline are habitat change and loss, pollution through synthetic pesticides and fertilizers, invasive species and pathogens, as well as climate change. Insect biodiversity plays a vital role for functioning ecosystems, especially for insectivorous migratory species such as birds and bats.

Despite recent developments in research on insect decline and its drivers, knowledge gaps remain about the conservation status and population trends of insects in some regions. Furthermore, attention has only recently started to be paid to the decline of insects as their numbers worldwide continue to fall dramatically.

To combat the drivers of insect decline, the draft resolution recommends a series of actions. Increased scientific research is needed to better understand the impact of insect decline on migratory insectivorous animals. Scientists recommend a precautionary approach with respect to the use of pesticides, especially in habitats important for migratory birds and bats.  They also advise caution so that non-target insects that are the food of migratory insectivores are not harmed. Actions are required to conserve insects, restore their habitats and address the causes of decline.  An important prerequisite to achieving the goal is raising awareness among farmers regarding the drivers of insect decline.

Parties to EUROBATS, the Agreement on the Conservation of Populations of European Bats, have already adopted resolutions discussing insect decline as a threat, highlighting the need for guidelines for urgent actions.  Providing further guidance related to the broader field of insects is vital for all migratory species that feed on them.

The agenda item on this topic at CMS COP13 is scheduled for discussion on Wednesday, 19 February 2020.

Insect Decline and its Threat to Migratory Insectivorous Animal Populations

EUROBATS Resolution: Insect Decline as a Threat to Bat Populations in Europe