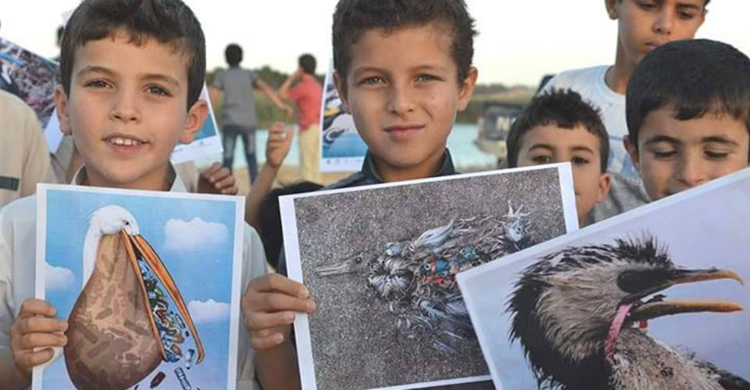 Bonn, 7 June 2019 - Under the theme “Protect Birds: Be the Solution to Plastic Pollution” the 2019 World Migratory Bird Day (WMBD) campaign was a record-breaking celebration and a great success. As the main organizers behind WMBD, the Convention on the Conservation of Migratory Species of Wild Animals (CMS) and the Agreement on the Conservation of African-Eurasian Migratory Waterbirds (AEWA) Secretariats, with their partner Environment for the Americas (EFTA), are pleased to share a few of the many highlights of the campaign.

A total of 558 events in 70 countries were registered – greatly surpassing the number of events and countries engaged in previous years.  The majority of events included clean-up activities, public lectures, exhibitions and art displays raising awareness of plastic pollution.

The campaign prompted an impressive amount of social media activity with the hashtag #WorldMigratoryBirdDay being mentioned in 11,500 social media posts within two weeks and having a potential reach of around 128 million people. An Instagram post from WWF in support of World Migratory Bird Day has received more than 3 million impressions.

As BirdLife International reported, an outstanding event took place in Lebanon, where President Michel Aoun launched three bird-themed postage stamps in honour of World Migratory Bird Day. In his speech, President Aoun drew attention to the conservation of migratory birds in the country, for which illegal killing of birds has been a significant issue over the past years.

Another highlight was the annual WMBD benefit concert held in Rome’s Palazzo Rospigliosi. Chosen in part to reflect the significance of celestial bodies in bird migration, the theme of the concert was the Moon, the Sun and other Stars (La Luna, il Sole e l’altre Stelle). Øystein Størkersen, Chair of the CMS Standing Committee and Fernando Spina, Chair of the Scientific Council gave introductory speeches.  Fernando, who is also a member of the choir, was the lead tenor for the aria Preghiera from Rossini’s Mose. The money raised at the event will be donated to bird conservation projects.

A press release, issued by the CMS and AEWA Secretariats, drew on scientific findings of Peter Ryan, an expert based in South Africa, concerning the effects on birds of entanglement, ingestion and nest building using plastic items. News wires, major international and national newspapers, other online media as well as partner organizations and NGOs picked up the press release.  Over 560 articles mentioned World Migratory Bird Day in the span of just two weeks, a few examples being the UN News Center, UN Environment and the Washington Post.

Leading experts and conservationists expressed their support to World Migratory Bird Day, including the Acting Executive Director of UN Environment, Ms. Joyce Msuya, UN Messenger of Peace, Dr. Jane Goodall and the Director General of WWF International, Mr. Marco Lambertini. The messages of support can be viewed on WMBD website, which is the main hub for the campaign.

The UN Secretariat published a special “UN in Action” film entitled “Protecting Birds Is Protecting Our Future” on 11 May. The film included an interview with AEWA Executive Secretary, Jacques Trouvilliez.

“Migratory birds connect not only ecosystems but also people and nations. With better governance and greater sustainable use of natural resources, we will create favourable conditions for the conservation of migratory birds,” Mr. Trouvilliez said.

The film informs the viewers about the threats that migratory birds are facing in a changing world, such as habitat loss, climate change and light pollution. It also explores the ways every individual can be involved in bird conservation.

Finally, the East Asian-Australasian Flyway Partnership produced a campaign trailer promoting WMBD 2019.  The animated trailer explains the issue of plastic pollution and its severe effects on migratory waterbirds in a way that appeals to the viewer’s compassion.

The CMS and AEWA Secretariats would like to take this opportunity to sincerely thank everyone involved for their commitment and support in making WMBD a remarkable global celebration. We look forward to hearing from you again in advance of 12 October, the second date when we are celebrating World Migratory Bird Day in 2019.