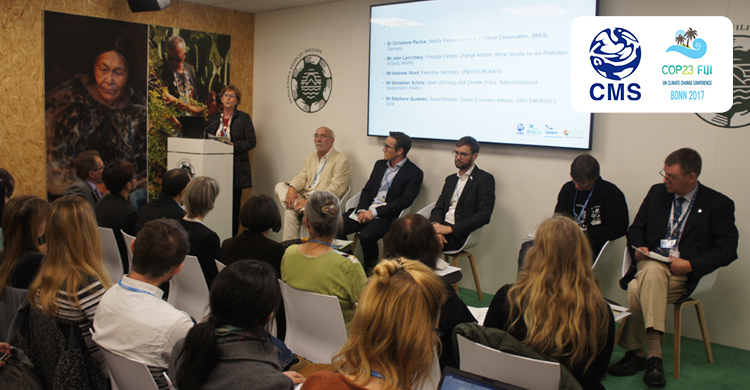 Bonn, 16 November 2017 – at a side event held on 14 November and organized by CMS, BirdLife International, NABU (the German conservation NGO) and ORÉE (Organisation pour le respect de l'environnement dans l'entreprise), an expert panel addressed ways to minimize impacts on wildlife, in particular migratory species, associated with the deployment of renewable energy technologies.  “Win-win” solutions are available, where clean energy can be produced to contribute to achieving a carbon-free future and universal access to energy, without compromising efforts to conserve wildlife and ecosystems.

Following introductions by Marco Barbieri of the CMS Secretariat and Edward Perry of BirdLife International, the audience heard a series of contributions from invited expert speakers.  Mr Perry also acts as coordinator of the Multi-stakeholder Energy Task Force, set up under CMS COP Resolution 11.27 adopted in 2014 and operationalized in 2016 thanks to a voluntary contribution from the German Federal Ministry for the Environment (BMUB),

Dr. Christiane Paulus from the BMUB described Germany’s experience with renewable energy stressing that efforts to combat climate change had to go hand-in-hand with conservation policies. Reducing demand for energy and eliminating waste were essential elements in future strategies as was better planning.  A new law ensured that conservation concerns were addressed at the start of planning process and not when projects were already advanced, and it was recognized that choosing the most appropriate sites for developments was preferable to instigating mitigation measures if things went wrong.

John Lanchbery of the Royal Society for the Protection of Birds, illustrated a research project aimed at determining the compatibility of renewable energy development in the UK with the physical environment and its other uses including conservation.  The findings of the project indicated that renewable energy development and climate mitigation targets could be achieved without major conflicts with other uses of the territory, provided good planning was in place. Mr Lanchbery also highlighted the great potential for offshore wind turbines.

Andreas Streit, Executive Secretary of EUROBATS, stressed the dangers posed by wind turbines to bats from collisions and barotraumas caused by rotating blades.  EUROBATS had been in the vanguard in developing guidelines and was pressing for more effective environmental impact assessments bymaintaining a roster of suitably qualified experts.

Sebastian Scholz, Head of Energy and Climate policy at NABU, illustrated initiatives undertaken by his organization to ensure compatibility between nature conservation and energy developments. NABU was also participating in the recently formed Competence Centre for Nature Conservation and Energy Transition (KNE), established as a skilled and neutral contact partner for all parties invol­ved in conflicts around nature conser­va­tion and energy transi­tion.

Stéphane Quefelec, of ONG ENERGIES 2050, provided some examples of the work being done by his organization at different levels (international, national and local).  ONG ENERGIES 2050 is active in 60 countries. He illustrated a project in Senegal, where loss of forests for biofuel was having a drastic effect on local people’s lives as they depended on the forest for food.  He stressed the importance of having adequate data to undertake assessments and analysis, recognizing that this was a time-consuming exercise.

Debate after the presentations stressed the particular value of the various sets of guidelines that had been produced by CMS, EUROBATS and others in the fact that they had been backed by Conference Resolutions which were binding on Parties. Emphasis should be placed on ensuring uptake of these guidelines and effective implementation of the resolutions.

A recently published report produced by ORÉE was distributed at the meeting.  The online version can be accessed here.