Ecological Connectivity to Be Focus of CMS COP13 in India 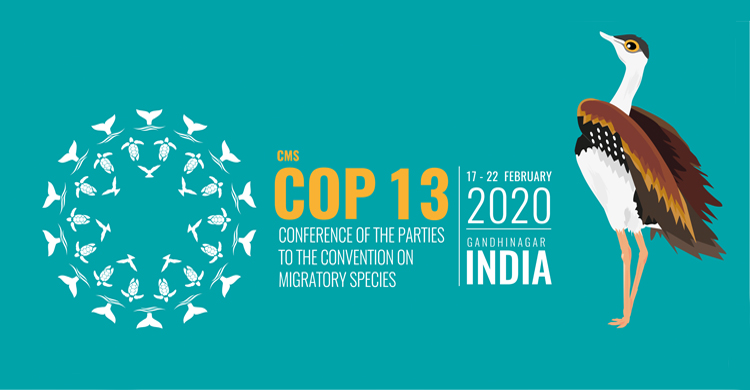 Bonn, 19 November 2019 – “Migratory species connect the planet and together we welcome them home” will be the theme of a major UN Wildlife Conference dedicated to migratory species in India early next year.

Under this theme, governments, scientists, conservation groups and wildlife experts will convene at the 13th meeting of the Conference of the Parties to the Convention on Migratory Species (CMS COP13) due to take place in Gandhinagar, India, from 15 to 22 February 2020.

The theme was announced today by Amy Fraenkel, CMS Acting Executive Secretary and Soumitra Dasgupta, Inspector General of Forest at the Ministry of Environment, Forest and Climate Change of India during COP13 preparatory meetings currently underway in Bonn.

Throughout their life cycles and migration ranges, migratory animals depend on a functioning network of connected habitats across countries and continents to breed, feed and rest.

The loss and fragmentation of habitat are the key threats to migratory animals across the world. They are also considered to be the greatest threats to biodiversity worldwide with climate change exacerbating these effects.

In a world that faces a continuous decline in biodiversity with migratory animals being a key component, ecological connectivity is essential to halt and reverse this trend.

CMS has called for the concept of connectivity to be integrated into the new Global Biodiversity Framework, which will be adopted at the end of next year in China.

Ms. Fraenkel said: “CMS COP13 is expected to be a milestone for future conservation policy. To save nature in an increasingly fragmented world, the core concept of connectivity needs to be incorporated in global conservation efforts and should be embedded in the new deal for nature.”
Mr. Dasgupta said: “CMS COP13 will be an important opportunity for India to showcase and demonstrate its leading work and commitment to global wildlife conservation. We look forward to welcoming the international delegates to India and to working with them to make the planet a more hospitable place for both migratory animals and people."

The human footprint has left lasting marks on the planet. Roads, railways, fences and urbanization are increasingly cutting through landscapes and dividing nature. They interrupt the web of life and prevent migratory animals from completing their essential journeys.

Over 100 million large mammals are killed by vehicles every year, and their numbers are on the rise. Nevertheless, the world is expected to invest around US$90tn in infrastructure in the next 15 years alone, resulting in more new roads and railways. These obstacles to migration interrupt the natural life cycle of migratory wildlife and pose a lethal danger.

The UN global assessment on biodiversity and ecosystem services, released by IPBES in May, documented the dramatic decline of biodiversity in all parts of the world. Without increased action, over 1 million species could face extinction in our lifetimes.

CMS brings countries together to shape transboundary policies that ensure the long-term survival of migratory animals across countries and continents. It is the only convention that conserves migratory species and their habitats across national boundaries.

To be successful, large-scale conservation must consider entire migration systems and the functioning of the migration process itself. The geographic scope goes beyond protected areas or sites subject to other conservation measures, to include an ecological network of areas important for the survival of species.

The Convention on Migratory Species is working closely with governments, international organizations, conservation groups, and wildlife experts to ensure that connectivity conservation will be a central part of future global conservation policy and that the unimpeded movement of species and the flow of natural processes will continue to sustain life on Earth for generations to come.

Case studies on the importance of connectivity for the conservation of migratory species:

Bats, the only mammals capable of true flight, are important players in connectivity. They not only require connectivity for large seasonal movements, but they can also help to create and maintain it. With over 1,300 species, bats are the second largest group of mammals worldwide. Because of their great abundance and diversity, bats strongly influence the landscape they use as pollinators, seed dispersers or as a biological pest control.

Whales encounter many threats when undertaking long annual migrations connecting different continents. Habitat degradation and intense vessel traffic intersect movements and prevent connectivity of Blue Whales migrating in the Eastern Tropical Pacific off the coasts of Central America. According to a recent report by the International Monetary Fund, protecting whales has clear economic benefits. During its lifetime, each great whale sequesters around 33 tons of carbon dioxide on average, ten times more than a tree. By doing so, a whale contributes substantially to enhancing resilience to climate change, which is a key driver of extinction.

The Serengeti migration is the world’s largest remaining large mammal migration with nearly 2 million animals crossing an ecosystem of 30,000km2 every year. They attract wildlife tourists from across the world.

However, fencing and human encroachment have led to a dramatic decline in these wildlife spectacles. Connectivity, in the form of the Serengeti migration, is essential for the productive functioning of dryland ecosystems. As both wildlife and people need to cross vast landscapes to respond to unpredictable rainfall patterns, drylands are particularly affected by fencing.

Lions in Africa are facing a catastrophic decline, with Africa’s population dropping 50 per cent in only 20 years. Safeguarding African wildlife and promoting sustainable development are not conflicting interests. A report released by New Lion Economy states that landscapes supporting lions, “lionscapes”, provide more ecosystem services, the benefits that people receive from healthy ecosystems, than the average across Africa.
Preserving lions’ habitats strengthens connectivity of functioning ecosystems. They maintain many other services such as water sources vital for drinking water and power; store carbon to mitigate climate change; support food security and protect communities against weather-related disasters.
Yet many of these services will disappear if ecosystems are lost or degraded. Lions, therefore, make excellent indicators of ecosystem services and sustainable development.

Birds respond to climate change and other man-made environmental changes in a different manner.

On the one hand, birds can dramatically change their migration habits in a very short time, forging connections between nations far beyond international boundaries. On the other, some birds may be better able than others to cope with man-made changes in habitat conditions to maintain viable populations of migratory birds.

Tiny solar geolocator tags showed that a new population of Barn Swallows migrates only as far north as the north coast of South America in the austral winter, whereas their immediate ancestors used to migrate back to North America.

Scientists found out that, in future, the distance long-haul migrants need to travel between suitable breeding and non-breeding habitats will significantly increase. In 50 years, the Bee-eater will need to fly 5,000 km further and four days longer. Migration becomes a riskier undertaking, and connectivity will be at stake. In addition to climate and habitat change, migrants will need to change migration journeys, which may exacerbate predicted population declines.

Ecological Connectivity to Be Focus of CMS COP13