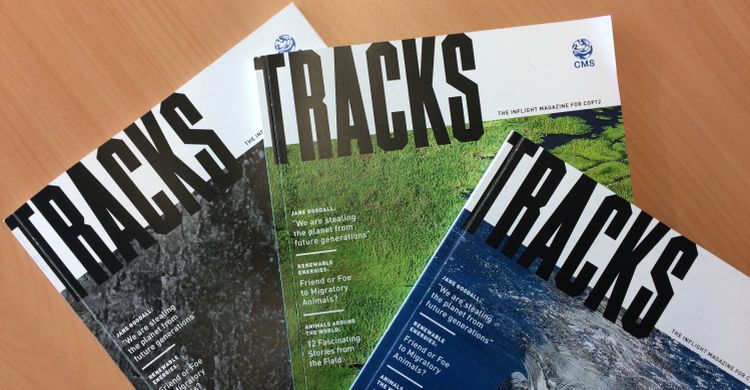 Bonn, 18 May 2018 – Exciting news has reached the CMS Secretariat that TRACKS, the special “Inflight Magazine” distributed to delegates attending the CMS COP12 in Manila in November 2017 has been nominated for  two publishing awards.

The 84-page magazine, TRACKS won a silver award topping the not-for-profit category at the Mercury Excellence Awards 2017-18 and has recently also been shortlisted at the Best of Content Marketing (BCM) awards in the categories “Specials and Annuals” and “Cover of the Year”.

The Mercury Excellence Awards aim to honor outstanding achievement in professional communications and are open to professionals from agencies, associations, corporations, government agencies, nonprofit groups, and organizations from countries worldwide.  The awards take their name from Mercury, the messenger of the Gods in Roman mythology.

The Joint Communications Team of the CMS and AEWA Secretariats developed the magazine in close cooperation with a team from “Territory”, a professional and experienced design and communications agency based in Hamburg. The company took on the project as a corporate social responsibility project while the seed funding for its production came through a voluntary contribution to CMS from the German Federal Ministry for the Environment (BMU).

"This magazine, in many ways, represents the subjects which it intended to bring awareness to: the incredibly diverse, and deeply afflicted, endangered species of the animal kingdom.

Much like the members of the animal kingdom itself -- and its many habitats -- this project visually came together through a disparate set of individuals lending a bit of their personal passion and uniqueness -- by managing to reach out or reply "yes we‘d love to help" from many corners of the world -- mostly doing so at pro-bono or deeply discounted work-rates. From photography from San Francisco, Berlin and Sao Paolo, to typography from New York City, and illustrators from Seoul, Valencia, Valparaíso and Barcelona. The uniqueness and diversity of the animal kingdom are woven into the esthetic fabric and content of the magazine, as well as reflected by the people that worked together to see this project come to fruition."

The Best of Content Management (BCM) is Europe’s largest competition for publishing content in the field of commercial communication. The winners will be announced at a ceremony to be held in Vienna on 14 June 2018 coinciding with the international BCM Congress.

As well as winning the Mercury Excellence Award and being nominated for the BCM, TRACKS has also been featured on the website of Design made in Germany.

The TRACKS Magazine is the second CMS-production which has been honoured in this way.  “Survival – Saving Endangered Migratory Species”, co-authored by CMS Ambassador Stanley Johnson and the Secretariat’s consultant editor, Robert Vagg, was a finalist in the Nature and Environment category of the 2011 Benjamin Franklin Award.