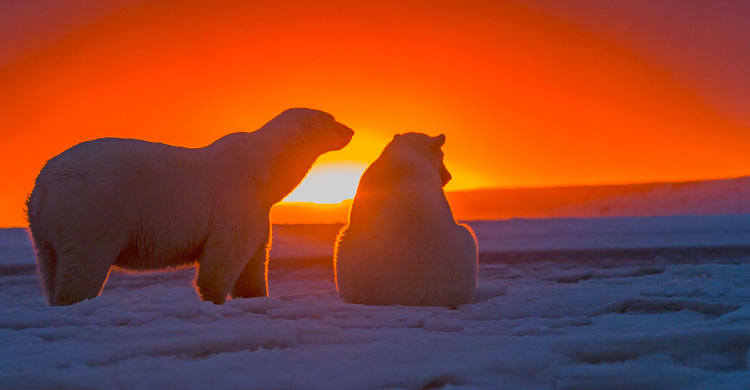 Fairbanks, Alaska and Bonn, 9 February 2018 – CMS Executive Secretary, Bradnee Chambers has been attending the biennial meeting of the Polar Bear Ranges States, which was held on this occasion in Fairbanks, Alaska, USA.

The Polar Bear (Ursus maritimus) was added to Appendix II of CMS at the 11th Conference of the Parties in Quito in 2014.  Appendix II listing means that Range States are encouraged to conclude agreements for the benefit of the species involved; the Polar Bear Agreement meets the criteria laid out in Article V of the Convention.

In his address to the meeting, Executive Secretary Chambers stressed how CMS and the Polar Bear Agreement could benefit from closer cooperation, pointing out that their remits are complementary.  Climate change is clearly having an effect on Polar Bear habitat, but its drivers originate beyond the species’ range and have to be tackled at a global level.  Sustainable tourism, pollution, marine debris, and the correlation between wildlife and the Sustainable Development Goals are other potential areas for cooperation between CMS and the Agreement. As one concrete step CMS in cooperation with Norway is proposing to host an expert workshop on the impacts of climate change on Polar Bears and possible mitigation measures.

“I see a whole range of opportunities where CMS and the Polar Bear Agreement can cooperate.  The expertise that CMS is building on the issue of the impacts of climate change on wildlife could complement the impressive scientific work being undertaken by the five Range States of the Polar Bear, a species for which I, as a Canadian, have a particularly strong affinity.”

In addition, Parties to the Agreement have reviewed arrangements for providing secretariat services and are considering a bid from CMS, which would involve dedicated staff being accommodated in the CMS premises at the UN Campus in Bonn.

The Polar Bear Agreement was signed in 1973 by all five Range States – Canada, Denmark (for Greenland), Norway (for Svalbard), the USA and the USSR (succeeded by the Russian Federation).  The Agreement therefore predates the Convention by some six years.  Of the five parties to the agreement, only Norway is a member of CMS, although the USA and the Russian Federation do participate in the activities of instruments concluded under the Convention, namely the MOUs on sharks, marine turtles of the Indian Ocean, Siberian Crane and Bukhara Deer.