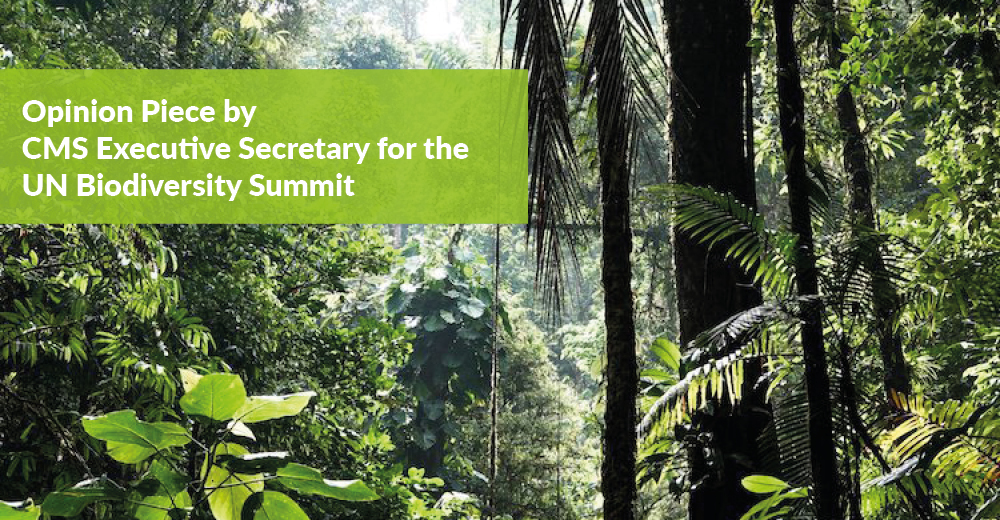 BONN (IDN), 30 September 2020 - The UN Summit on Biodiversity was meant to galvanize commitments to stop the impending biodiversity crisis, and to underscore the need for effective actions in a new Global Biodiversity Framework.  Few could predict that it would take place in the middle of a deadly global pandemic -- which in all likelihood was brought about by human activities that exploit wild animals and nature.

While COVID-19 has shined a spotlight on the increasing risk of infectious diseases from animals, the same human activities that are causing these risks are also causing the decline of wild species of animals. First is the direct use of wild species, which includes the use of meat from wild animals as a source of food or income, use of animal parts for other commercial products, recreational hunting, and traditional healing practices.  Second is the destruction of natural habitat and the encroachment of activities that bring humans and their livestock in close proximity to wild species, increasing the risk of spillovers of pathogens to humans.

The 2019 IPBES global assessment on biodiversity catapulted the loss of species onto the front pages of newspapers around the world. It found that we are losing wild species of plants and animals at an unprecedented rate, and that as many as a million species could go extinct in the near term. A recent study published in the journal Science found that North America has lost 3 billion birds in the last 50 years alone. And an initial review this year of the status of species protected by the Convention on Migratory Species found that the majority of those species are in decline.

Wild animals unquestionably provide an important source of protein for some poor communities and indigenous populations in various parts of the world. But any use of wild species of animals needs to be sustainable. And the current use and trade of wild animals go far beyond food security for vulnerable communities. Recent growth in domestic use and international trade is largely commercial. There has also been growth in demand for some types of wild meat in urban areas, with such meat viewed as a luxury product.

Addressing food security and poverty alleviation are among the highest priorities of the UN Sustainable Development Goals. Achieving these goals will be ever more challenging as we add roughly 2 billion people to the global population in just the next 30 years and reach over 11 billion by the end of this century. Currently, humans and livestock account for approximately 96 percent of the biomass of all mammals, with wild animals making up only 4 percent.  Reliance on the consumptive use of wild animals is simply not a feasible or sustainable solution for long-term food security and poverty alleviation.

Unfortunately, the pressures on wild animals and their habitats are expected to grow exponentially over the coming decades, with millions of kilometers of planned new roads, massive increases in energy infrastructure, unprecedented human population growth, urban expansion, food insecurity and climate change.

The thirteenth Conference of the Parties of CMS adopted numerous resolutions and decisions aimed at addressing the threats to migratory species and actions to enhance their conservation needs.  COP13 also adopted the Gandhinagar Declaration, highlighting the CMS priorities for the post-2020 Global Biodiversity Framework, and calling for it to include: 1)  a commitment to maintaining and restoring ecological connectivity; 2) provisions to effectively address the conservation needs of endangered species and species with an unfavourable conservation status, including goals and targets to halt species declines; 3) provisions encouraging Parties to include in their NBSAPs appropriate reference to other biodiversity-related conventions to which they are also Parties, in order to increase more coherent implementation across the various global agreements;  4)  recognition of the role of the various biodiversity-related Conventions as well as other relevant MEAs, for effective implementation, monitoring, and review of the post-2020 global biodiversity framework; and  5) provisions to promote international cooperation and connectivity for the   implementation of the new Global Biodiversity Framework.

The UN Summit on Biodiversity provides an opportunity to commit to actions needed to protect wild species and natural habitats as a central element of reversing the global trends of biodiversity loss.  COVID-19 just provides one more reason to do so.

This article appeared on 30 September 2020 in InDepthNews