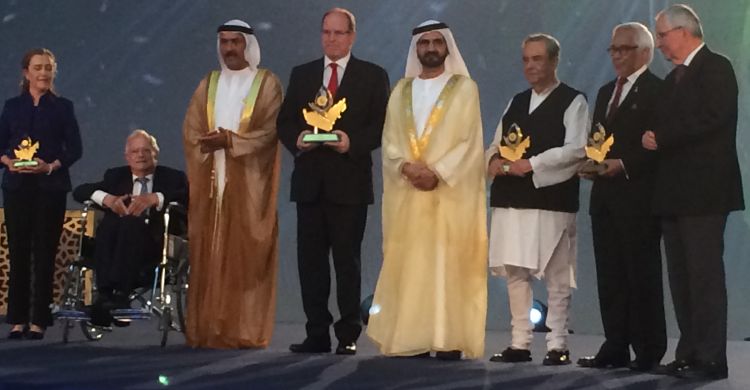 Bonn, 8 May 2014 - Among the recipients of this year’s Zayed International Prize for the Environment honoured at a ceremony held in Dubai yesterday were Luc Hoffman, a former Director of Wetlands International and HSH Prince Albert II of Monaco, who was Patron of the Year of the Dolphin campaign 2007-8.

Dr. Luc Hoffmann (Switzerland), the ornithologist and philanthropist who endowed the MAVA Fondation pour la Nature, was honoured for his work including on the global conservation of wetlands; he was a driving force behind the Ramsar Convention.   He has served as director of Wetlands International and Vice-President of the IUCN and was a key figure in establishing WWF and the Fondation Internationale du Banc d’Arguin in West Africa.  He also set up the Tour du Valat Biological Research Station dealing with issues related to conservation of wetland and waterbirds.  Located in the Camargue, southern France, the station is where  the technical support unit of the AEWA African Initiative is based.

HSH Prince Albert was honoured for the contribution made to the environment by the Foundation that bears his name, which has recently led a campaign to protect the Bluefin tuna.  In 2009 the Prince himself undertook a three-week expedition to Antarctica where he met climate experts and visited the South Pole.

For more information see the news release on the UNEP website