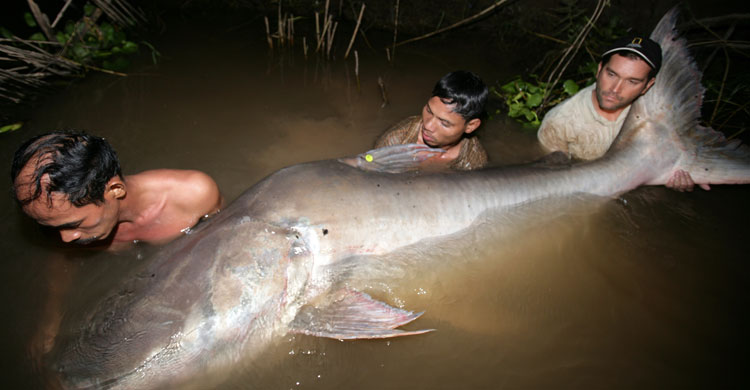 Some of the most important animal migrations take place in rivers and streams across the world. Take for example the Tonle Sap River in Cambodia, an area well-known to Dr. Zeb Hogan, fish biologist, host of National Geographic’s Monster Fish, and CMS COP-Appointed Scientific Councillor for Fish.

“Billions of fish use this as a migratory corridor to migrate from the Tonle Sap Lake down to the Mekong River. This is one of the largest animal migrations on Earth, rivalling the huge migrations across the Serengeti and Africa, and these migrations are not only important for wildlife but also for people. Migratory fish support the needs of millions of people. That’s why on April 21, 2018 we’re holding World Fish Migration Day … a global event to celebrate the importance of migratory fish.”

Yet migratory freshwater fish such as catfish, sturgeon, salmon and eel face a number of threats—most notably physical barriers that block migration paths. As a simple analogy:

“Imagine you’re driving to work or to the shops, and suddenly there’s a roadblock you can’t get past. It’s the same kind of thing for fish, except we don’t normally see it. What we want to try and do in the case of fish is to remove the roadblocks, or at the very least create a well-signposted diversion, so they can get past these manmade obstacles, principally dams and weirs.”

WFMD events highlight the importance of migratory fish, the need for healthy rivers, the communities that depend on both, and our options to minimize or avoid negative human impacts. Ultimately, WFMD aims to create lasting commitments from non-governmental organizations, governments, and industry to safeguard and restore free-flowing rivers for migratory fish.

The Common Sturgeon and the Mekong Giant Catfish are listed on CMS Appendix I. An additional 19 species of migratory freshwater fish are listed on Appendix II. The CMS Secretariat and Range State Governments are currently exploring the potential role for CMS in conserving the critically endangered Appendix II-listed European Eel, the geographic range of which stretches from Northern Norway to the Mediterranean and North Africa.