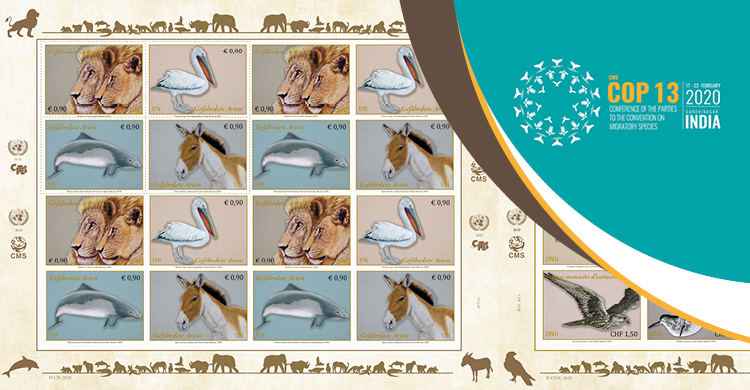 Gandhinagar, 17 February 2020 – A special set of UN stamps featuring endangered migratory species will be issued today at an evening function to coincide with the Thirteenth Conference of the Parties to the Convention on Migratory Species (CMS COP13), taking place in India this week.
The stamps are a collaboration between United Nations Postal Administration (UNPA), the Convention on Migratory Species (CMS) and the Convention on International Trade in Endangered Species (CITES).
The UNPA has been issuing stamps since 1951, which illustrate the aims and achievements of the United Nations and its family of organizations. Every year since 1993, the UN Postal Administration has issued a special set of stamps featuring endangered wildlife.   For the first time, this year the focus is on endangered migratory species, and the animals chosen for the 2020 edition are covered by both CMS and CITES. The stamps, which can be used as postage if mailed from UN headquarters in New York, Geneva and Vienna, are also highly sought after by collectors.
Amy Fraenkel, Executive Secretary of CMS said: “This beautifully-illustrated set of stamps raises the profile of migratory species in a unique way, adding an important message to a cherished UN tradition. The stamps, like the endangered species they feature, will travel across the planet and connect people. In doing so they will also help raise awareness about the very species that CMS is set up to protect. With the launch of these UN Stamps on the eve of CMS COP13 in Gandhinagar, India we will also be sending an important message from Gujarat to the world – migratory species connect the planet and together we welcome them home!”
The 12 species featured on the stamps are: the Egyptian Vulture, the Argali Sheep, the Andean Flamingo and the Great Hammerhead Shark (appearing on the US$1.20 stamps), the Addax, the Saker Falcon, the Siberian Crane and the Narwhal (on the CHF1.50 stamps) and the Kiang, the Lion, the Dalmatian Pelican and the Harbour Porpoise (on the €0.90 stamps).
Ivonne Higuero, Secretary General of CITES said: “Not unlike the letters on which these stamps might go, migratory species travel around the world to find their destinations and seasonal habitats. Both CITES and CMS work to ensure that these travelers can continue to roam the Earth and still find a home to settle in. CITES strives to keep the trade of such species legal, sustainable and traceable. As we mark the ‘biodiversity super year’ throughout 2020, we will also advocate for the conservation of these species and their habitats for both people and the planet in support of the UN Sustainable Development Goals. We are most grateful to the UN Postal Administration for providing us with such a beautiful tool to raise awareness of the species that are covered by our two sister Conventions.”
Thanawat Amnajanan, Chief of the United Nations Postal Administration said: “The United Nations Postal Administration is very honored to be working with CITES and CMS this year to issue stamps featuring endangered migratory species, and to support CMS COP13 in Gandhinagar, India. This is the first time that UNPA has worked with both CMS and CITES – the two UN-backed treaties dedicated to the conservation and regulation of trade of the remaining wildlife on our planet.”
The landmark UN Global Assessment Report on Biodiversity released in May 2019 (IPBES Report1) found that the world is in danger of losing 1 million species to extinction, including migratory species. The IPBES report also found that we are losing biodiversity at an unprecedented rate.  Collective action by all countries is needed to address the threats to biodiversity, which include habitat loss and fragmentation, overexploitation, and climate change.
“There is an urgent need to protect vulnerable species globally, and especially migratory wildlife which is in significant decline worldwide. International cooperation is essential to conserve and protect the Earth’s varied migratory species. United Nations stamps, just like migratory animals, travel the world connecting people across borders. We hope that these stamps will help raise awareness about the need to step up conservation action globally,” said Mr. Amnajanan.
The illustrations featured on the UN stamps are the work of Portuguese artist, Sandra Macieira. The stamps will be issued at three UN centres: New York, Geneva and Vienna and will be ceremoniously unveiled to over 2,500 participants from 130 countries attending an evening reception on the opening day of CMS COP13 in Gandhinagar, India.
For more information please visit the UN Stamps Website.
1The IPBES Global Assessment Report on Biodiversity and Ecosystem Services: http://bit.ly/GAMediaRelease