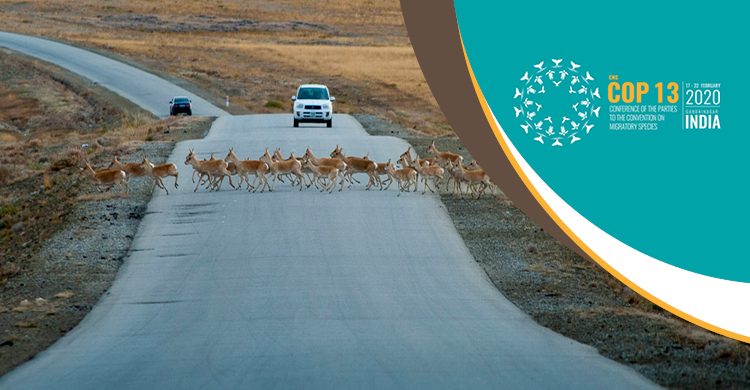 Roads, railway tracks and fences can create barriers to the movement of animals © ganbayar/hureelen

Gandhinagar, India, 15 February 2020 - Roads, railway tracks and fences can create barriers to the movement of animals, many of which are hit and killed by vehicles or trains when attempting to cross, while others get entangled in barbed wire fences and die.
Barriers disrupt habitat connectivity and can lead to genetic isolation, driving populations to local extinction. Roads, railway lines, and settlements cutting through habitats can also increase disturbance to wildlife, pollute their feeding areas, and ease access for poachers.
Delegates at CMS COP13 will consider the need for guidance and implementation tools to mitigate the impacts of linear infrastructure on migratory species.
Globally, at least 25 million kilometres of new roads are projected for development by 2050, marking a 60 per cent increase from 2010. Similarly, the development of an additional 335,000 kilometres of railway tracks is expected over the next 40 years to accommodate demand for passenger and freight travel.
Given the predicted scale of increase across the world, measures to conserve migratory animals are especially urgent.
To date, CMS Guidelines have advised countries on how to avert linear infrastructure threats to large mammals in Central Asia through the Convention’s Central Asian Mammals Initiative. In the future, guidance and implementation tools will be developed for other regions and CMS-listed species not included in the Initiative.
Aquatic species face other threats from different types of infrastructure including coastal developments such as hotels, restaurants, and roads. Turtle nesting beaches are at risk while beaches, seawalls and oil platforms also degrade turtle habitats.
Currently, CMS Guidelines deal with underwater noise, but other threats related to infrastructure development are yet to be addressed.
CMS experts will collate existing standards, guidelines, and best practices and make recommendations on how to address gaps in existing tools.
Under national laws in many countries and in accordance with many international and national lending agencies and donors, environmental and social considerations and safeguards must be applied by developers at planning stage. Yet adherence is often weak. CMS experts will seek to identify the major challenges of non-compliance and seek solutions. The lack of available data including on animal migration patterns remains a major challenge.
The agenda item is scheduled for Wednesday, 19 February.
For more information, please see:
Infrastructure Development and Migratory Species