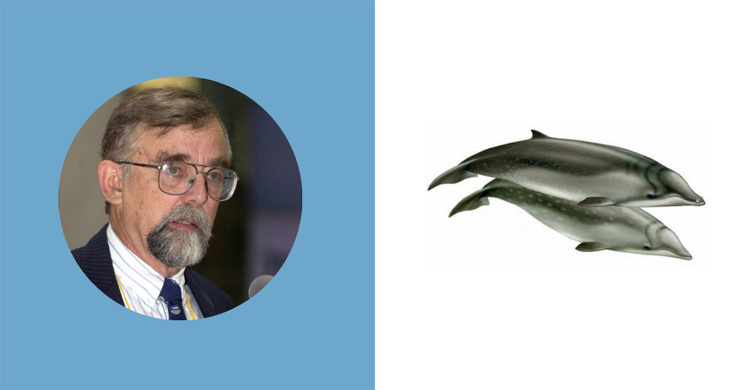 A marine mammal taxonomist and researcher of international renown, Bill served on the CMS Scientific Council as COP-Appointed Councillor from 1911 until 2014. At first, he advised the Convention on almost all “big things that swim”, as he once summarized his role, which was later refocused to cover specifically aquatic mammals.

At the time of his appointment as Scientific Councillor, Bill already had an outstanding record in the fields of marine mammal science and conservation. Starting in the late 1960’s, Bill began conducting what would become critical early research on dolphins killed in the eastern Tropical Pacific tuna purse-seine fishery. His work highlighted the growing problems in this fishery, which in turn was influential for the enactment of the US Marine Mammal Protection Act of 1972. Additionally, the rigor and scope of his pioneering work on the taxonomy, life history, population ecology, and behaviour of these species has raised the bar for all future studies. In acknowledgment of his work on cetacean taxonomy a newly recognized species of beaked whale, Perrin's beaked whale (Mesoplodon perrini), was named in his honor (Dalebout 2002). For almost 50 years, Bill had a celebrated career at the NOAA Southwest Fisheries Science Center, where he served as a Senior Scientist for much of that time. He was also an adjunct Professor at Scripps Institution of Oceanography, UCSD and the University of Washington. Bill’s publication record is awe-inspiring. He not only wrote and co-authored hundreds of papers, but also edited many important books and special journal issues. Over several decades, he has been a leader of critical cetacean conservation work done within the USA and in international fora, including the IUCN Cetacean Specialist Group, IUCN Red List assessments, and the Scientific Committee of the IWC.

In the context of CMS, particularly his studies and capacity building in southeast Asia and western Africa were highly valued, and his relentless efforts to ensure better protection for cetaceans in those regions. Bill was the driving scientific force behind most of the proposals for listing of cetacean species on the CMS Appendices during his tenure, skilfully not only making the case for their inclusion, but also putting forth continuous efforts to motivate governments and other stakeholders to take action for these species.  He also acted as liaison person between the CMS Scientific Council and the IWC Scientific Committee.

All of us in the Secretariat and in the Scientific Council who have worked directly with Bill will have fond memories of these occasions. Bill had a unique ability to ask the right questions and propose potential ways forward that made him an enormous asset to the Convention. He was always responsive, always constructive, and with his passion for his work and his unique sense of humour was truly a pleasure to work with.

Indeed, the field of marine mammalogy has lost one of its most influential and important scientists and leaders. He will be remembered with great affection for his goodness, passion, generosity and his warm heart for people and animals alike.

We also know that Bill’s life’s work will carry on through the projects and programmes that he initiated and inspired. He will be remembered with deep gratitude and fondness, and he will be greatly missed.

Our sincerest condolences go to his family, friends and colleagues.