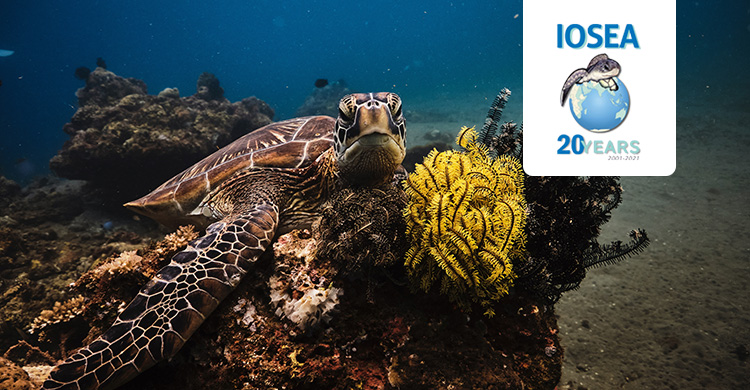 Bonn, 16 June 2021 - On the occasion of  World Sea Turtle Day 2021, “TurtleNet”, an interactive atlas that shows nesting, courtship, feeding and migration routes of marine turtles has been launched.

The new online Marine Turtle Breeding and Migration Atlas, developed by Queensland’s Department of Environment and Science (DES) in collaboration with the Convention on the Conservation of Migratory Species of Wild Animals (CMS), brings together decades of Australian and global data.

The interactive atlas will help to advance the turtle conservation efforts of CMS and its Memorandum of Understanding on the Conservation and Management of Marine Turtles and their Habitats of the Indian Ocean and South-East Asia. The IOSEA Marine Turtle MOU, as it is known in short, puts in place a framework through which States, territories, inter- and non-governmental stakeholders of the Indian Ocean and South-East Asian region, as well as other concerned States, can work together to conserve marine turtle populations and their habitats. This year, the IOSEA Marine Turtle MOU celebrates its 20th Anniversary.

Amy Fraenkel, Executive Secretary of CMS, said: “TurtleNet shows how marine turtles connect our oceans. We can see how Queensland’s turtles travel thousands of miles to many countries: young Loggerheads travel across the Pacific to Peru and Chile, adult Loggerheads migrate to Indonesia, Papua New Guinea and other countries, and Green Turtles migrate to and from Fiji, Vanuatu, Indonesia and New Caledonia. This new tool illustrates the connectivity in the oceans through species migration, and the need for countries to work together to manage and conserve populations.”

TurtleNet can be used by school children, community groups, interested locals, and scientists to create maps and graphs of population trends, and view videos showing the route of tracked turtles. They can see where turtles nest or forage near them, where marine parks protect key breeding sites, and how ‘their’ turtles move across the globe.

20 Years of Sea Turtle Conservation in the Indian Ocean and South-East Asia Region Celebrated in 20 Countries
Congratulations to Dr Col Limpus, an Officer of the Order of Australia
Dugong and Seagrass Toolkit Selected Among Top 25 UAE Government Innovations