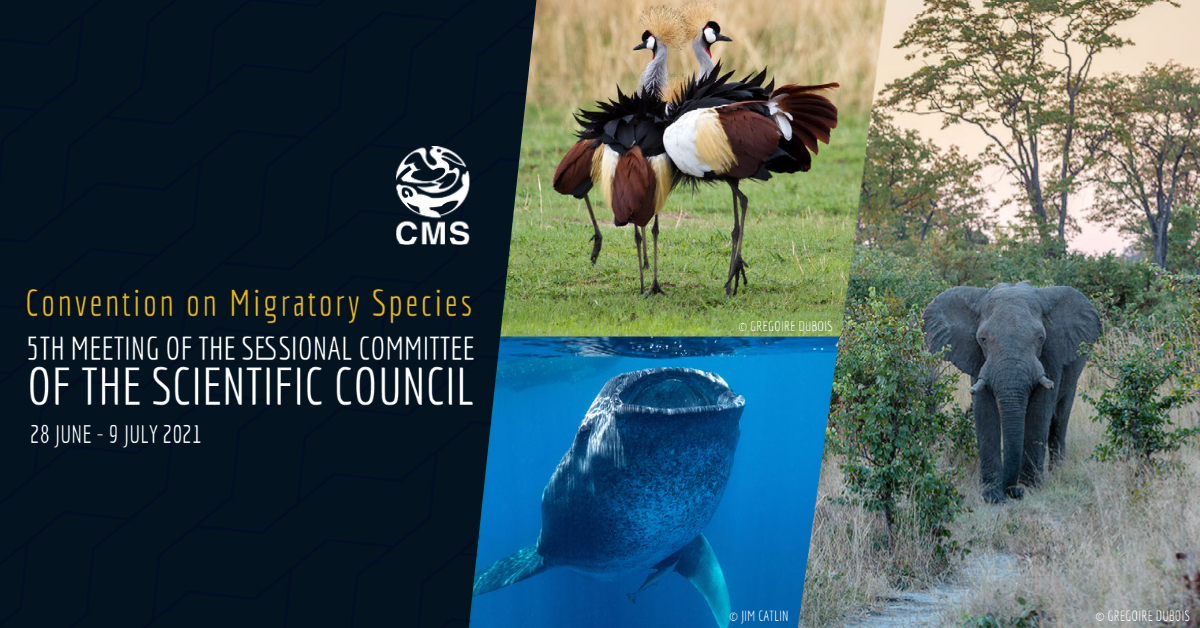 Bonn, 12 July 2021 – Following two weeks of global meetings held entirely online, the scientific body of the Convention on the Conservation of Migratory Species of Wild Animals (CMS) agreed on a wide-ranging series of actions to address growing threats to migratory species.

Among the key outcomes, the Committee agreed:

“The work agreed at this meeting is extremely important for addressing a wide-range of threats to migratory species.  I am particularly pleased that the Committee has decided to revive the work on migratory species and health,” said Amy Fraenkel, Executive Secretary of CMS.  “COVID-19 has shined a spotlight on the human health risks associated with the exploitation of wildlife and the destruction and fragmentations of habitat.  Many of these activities need to be addressed at the national level, as they do not involve international trade,” she added.

The meeting also endorsed the way forward for a new flagship report on the status of migratory species, which will provide a first-ever global assessment of the conservation status and trends for migratory species. The report, expected to be published before the next CMS Conference of the Parties (COP) in 2023, will provide clear guidance to decision makers on priorities to conserve migratory species and their habitats.

For instance, the Committee agreed to develop a conservation strategy for the Asiatic Cheetah, exploring opportunities for its recovery in Iran, the only country where it is currently occurring, as well as its reintroduction in India and West Asia.

It agreed to additional work on marine pollution, particularly in relation to marine debris involving fish aggregating devices (FADs), and the effects of persistent organic pollutants on migratory species. It also established a working group to address the deliberate killing and mutilation of seabirds in fisheries in the Southwest Atlantic.

On avian issues, the Committee confirmed the need to strengthen international cooperation to eradicate known threats affecting migratory birds in the African-Eurasian, Central Asian, East Asian-Australasian and American flyways, and pursue the development of an Action Plan for the conservation of the Yellow-breasted Bunting. The Committee also approved the commissioning of a study on the sale, use and regulation of use of mist nets and other nets used for bird trapping.

“It was certainly an interesting experience to hold a Sessional Committee meeting solely online.  It was important at this meeting to emphasize the core duties that the Sessional Committee provides to both Parties and the Convention. Our mandate to monitor the status of listed migratory species, which in turn supports our ability to recommend priority research or conservation measures, is as critical as providing sound scientific advice on species listing proposals and concerted actions. I am hopeful that our current project to review the conservation status of CMS-listed migratory species will allow the Committee to take a strategic approach to species that could benefit from CMS attention in future”, said Narelle Montgomery, Chair of the CMS Scientific Council, who chaired the international meeting from Australia.

The various streams of work agreed on by the meeting will commence immediately.

The Convention on the Conservation of Migratory Species of Wild Animals(CMS) aims to conserve terrestrial, aquatic and avian migratory species throughout their range. It is an intergovernmental UN treaty concerned with the conservation of wildlife and habitats on a global scale. Since the Convention's entry into force in 1979, its membership has grown steadily to include 132 Parties from Africa, Central and South America, Asia, Europe and Oceania.