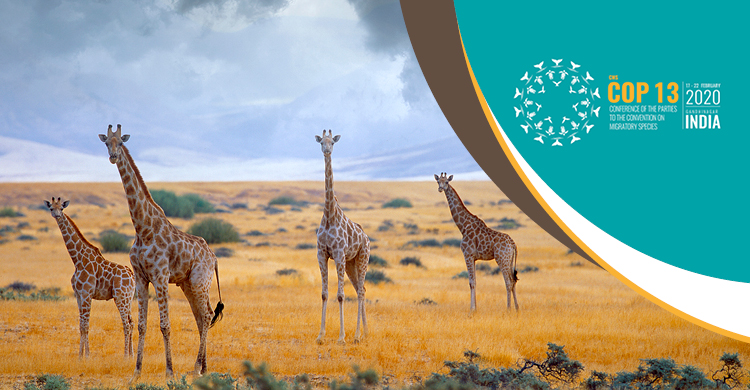 Gandhinagar, 20 February 2020 - A century ago, more than one million Giraffe used to roam across sub-Saharan Africa. But these gentle giants are now extinct in at least seven countries with only 100,000 animals remaining in fragmented populations across the continent.

Their decline by 40 per cent over the past 30 years means that Giraffes are now listed as ‘Vulnerable’ on the IUCN Red List.  Two-subspecies (Nubian and Kordofan Giraffe) are listed as ‘Critically Endangered’ and two others (Reticulated and Masai Giraffe) as ‘Endangered’.

In a bid to halt this decline, priority conservation measures have been submitted to CMS COP13 by the Governments of Cameroon, Chad, Ethiopia, Kenya, the United Republic of Tanzania and Zimbabwe.

Infrastructure development such as roads, railways, powerlines, and pipelines have created barriers to migration, fragmenting Giraffe populations and their habitats. Habitat loss and degradation have also been fueled by wildfire, livestock incursions and illegal encroachment by humans. Poaching, snaring and trade for bushmeat, skins, tails and traditional medicine have further put the Giraffe’s survival in doubt. Diseases, civil unrest, climate change, human population growth, lack of law enforcement, and lack of awareness of Giraffe conservation exacerbate these threats.

The Concerted Action proposes more transboundary coordination and collaboration across countries to improve information exchange and monitor trends of Giraffe populations. An online international Giraffe database will be developed to help improve the understanding of the population status as well as the movements of the Giraffe.

Successful implementation could result in improved legal protection, an expanded research network and greater information exchange, while raising general awareness will put Giraffe conservation higher on governments’ agendas. This would help generate more resources and commitment from Range States as well as from the international community.

Efforts under the Concerted Action could support the long-term recovery of the world’s tallest animal.

Proposal for a Concerted Action for the Giraffe (Giraffa camelopardalis)