You, Come Home When I Am Big! 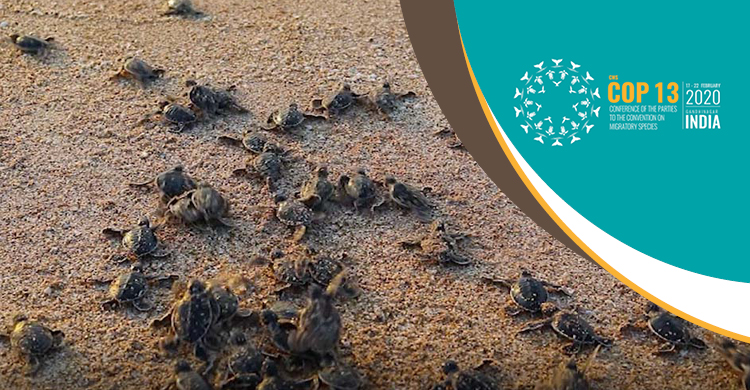 A short film titled "You, come home when I am big" depicts the hazardous first moments in the lives of turtle hatchlings

Gandhinagar, 18 February 2020 – a short film titled "You, come home when I am big" depicting the hazardous first moments in the lives of turtle hatchlings has been produced to coincide with the CMS COP13.
The film was made by Ajit Samal who is a celebrated fine art painter has been making wildilfe films and documentaries for over 20 years. Based at Gujarat, he has contributed many productions concerning the conservation of species including the White-backed Vulture, the Asiatic Lion, the Asiatic Wild Ass, the Sarus Crane, Olive Ridley Turtles and the Whale Shark, as well as the Nalsarovar Bird Sanctuary and Ramsar site and hte vuklture poisoning crisis.
He has also prepared field guides and pocket books on the birds, reptiles and mammals of Gujarat, as well as publications on common medicinal plants.
Starring in the film is Nirvaan Samal, a 12-year-old, 7th grader from Ahmedabad, Gujarat. He is an active member of the school’s „Ecoteam“ and has participated in wildlife photography competitions.  He has also taken part for many years in street plays across Gujarat, promoting the environment messages in support of the conservation of the Marsh Crocodile and the Sarus Crane.