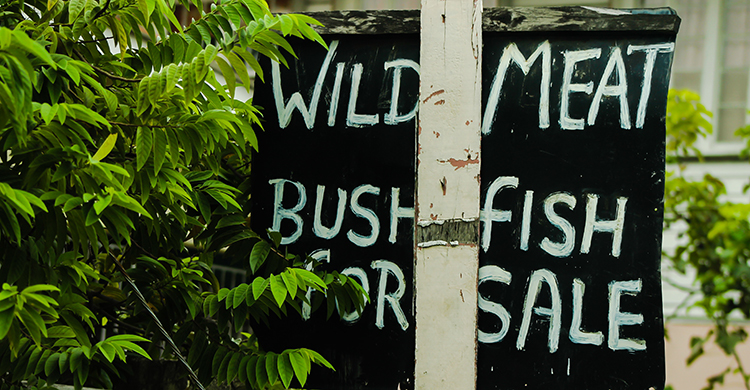 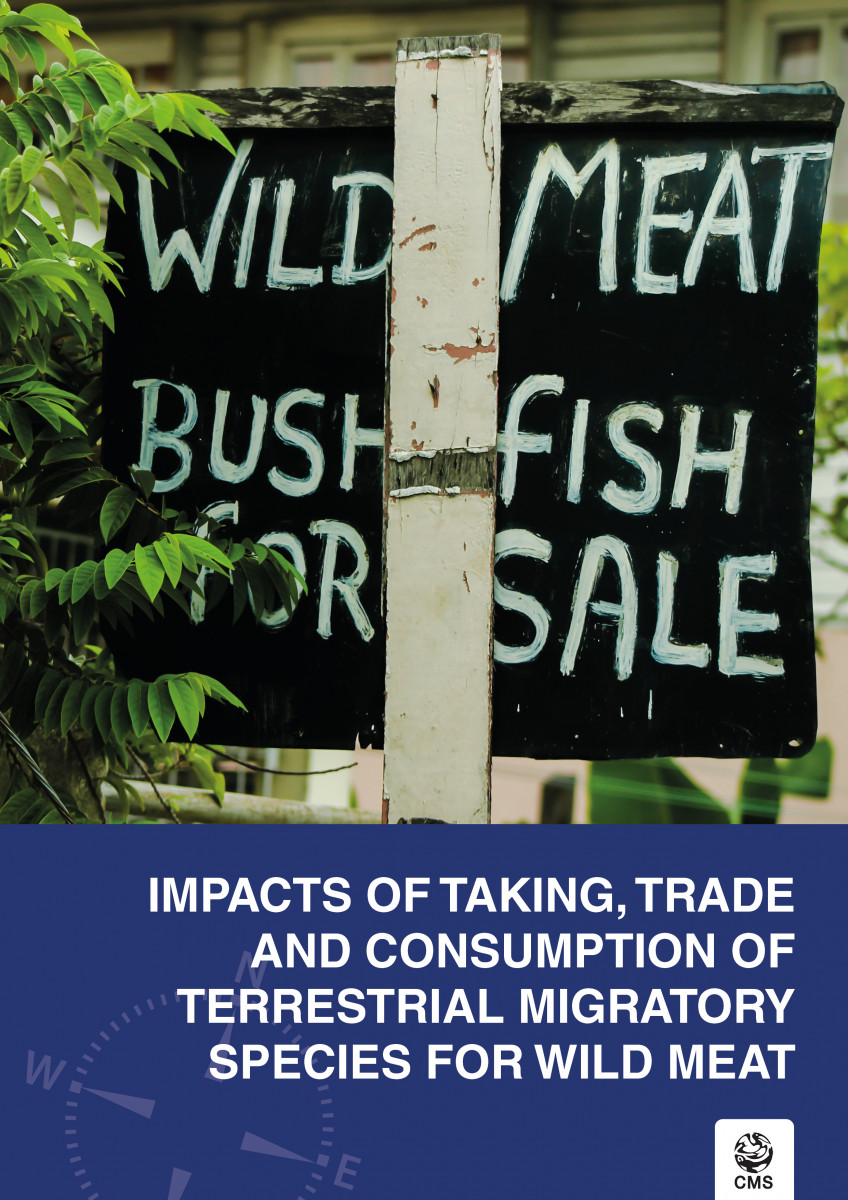 Bonn, 15 September 2021 - The taking of animals for wild meat consumption within national borders is having significant impacts on most terrestrial   species protected under the Convention on the Conservation of Migratory Species of Wild Animals (CMS), according to a new report released today. The report is the first of its kind and covered 105 CMS species.

Among its findings, the report found that wild meat is often a key use and a major driver for legal and illegal hunting, particularly of ungulates and primates, and especially during times of conflict or famine and in the course of land use change. This has led to drastic declines and extinctions of several migratory terrestrial mammal populations.

67 of the 105 species studied were recorded as hunted. Of these 67 species, the largest intended use (47 species) was for wild meat consumption. Other hunting purposes identified were for cultural reasons, medicinal use, human-wildlife conflict, unintentional take and sport/trophy hunting/fashion.

Global attention to wildlife taking has largely focused on international trade. However, the report found that the vast majority of taking of CMS species for wild meat consumption is driven by direct use or domestic trade. This has major implications for international and national efforts to protect vulnerable and endangered species.

Overall, 34 of 99 species with an IUCN Red List Assessment were reported as used at the subsistence level (direct use), 27 were traded nationally, and 22 were traded internationally, when all types of use were considered. However, when only meat for consumption was considered, 27 species (out of 99) were reported as consumed for subsistence, 10 species for national wild meat trade and only two species for international wild meat trade.

CMS Executive Secretary Amy Fraenkel noted, “This report indicates for the first time a clear and urgent need to focus on domestic use of protected migratory species of wild animals, across their range. We need to ensure that domestic laws and enforcement efforts are able to tackle this major threat to CMS species.”

The report also examined the link between the taking of species for wild meat with the risk of zoonotic diseases.

“As we seek to shift towards sustainable global food systems, it is critical that the use of wild species for food, is both legal and sustainable. The COVID-19 pandemic has taught us that the overexploitation of nature comes at a heavy cost. We urgently need to depart from business- as-usual. In so doing, we can save many species from the brink of extinction and protect ourselves from future outbreaks of zoonotic diseases,” said Inger Andersen, Executive Director of the UN Environment Programme.

The study cited a number of factors for the unsustainable taking. First, national legislation and regulations may lack clarity or are outdated, not reflecting the actual requirements of environmental factors, population traits and dynamics of the species concerned. Second, poor enforcement is a key driver of unsustainable use in several regions. Third, civil conflict and land use change can drive increased taking for wild meat. Fourth, migratory animals cross countries and regions with a wide variety of differing laws and enforcement approaches, increasing the risk of unsustainable take at different stages of their migration. Finally, growing urbanization and increased sale of wild meat as a luxury product is an additional pressure on protected animals.

The report also found that seasonal migration patterns mean migratory species are a particularly susceptible target for hunters, poachers and other consumers due to the well-known timing of the species’ arrival in a particular area.

It is important to note that wildlife contributes to the food security, health, income, jobs and cultural identity of many rural economies and for some of the world’s most vulnerable Indigenous Peoples and Local Communities (IPLCs). Any policy response needs to consider such uses, as well as the drivers of food insecurity.

Most Species in the Study Are Reported as being Threatened by Hunting.

Hunting (for all purposes) is reported as a key threat to the survival of many species. Excluding bats (Chiroptera), the study finds that 98% (41 out of 42) of the CMS species with an IUCN Red List Assessment are threatened by hunting. Hunting threatens 95% (21 out of 22) of those that are classified by IUCN as Endangered, Critically Endangered, or Extinct in the Wild.

The study documented linkages between hunting and the declining population trends of several species. 77% (40 out of 52) of the CMS species that were assessed by IUCN as having decreasing populations were recorded as threatened by hunting in this study. For instance, most migratory ungulates still extant in the wild have experienced significant population declines that can be attributed to hunting. All chimpanzee subspecies and three of the four gorilla subspecies reported as significantly threatened by hunting are also experiencing large population declines. Overall, the assessment of the report finds that taking has a direct impact on the populations of more than half (58 out of 105) of the studied species, with high impacts for at least 42% (40 out of 105) of them.

The study also found that there is insufficient data for a conclusive assessment on the taking of bats, which make up half of the CMS terrestrial mammal species studied. This could signal that they are either infrequently hunted, or that their hunting is being underreported.

Most Hunted Species Are Used for Wild Meat Consumption

Wild meat is often reported to be the key use of terrestrial migratory species and a significant motive behind both legal and illegal hunting. This is of particular relevance for migratory ungulates and primates that suffer most in the context of human-related disasters such as conflicts and famines, but also in the case of land use change. The report found that of all the CMS terrestrial mammal species that were recorded as hunted, 70% (47 out of 67) are used for wild meat consumption. Illegal hunting for meat is the primary threat to three Gorilla subspecies, Western Lowland Gorillas (Gorilla gorilla gorilla), Grauer’s Gorilla (Gorilla beringei graueri) and the Cross River Gorilla (Gorilla gorilla diehli).

Carnivore and elephant species are hunted for many different uses and disaggregating the impact of wild meat hunting from hunting for trophies or human-wildlife conflict is often not possible.

While wild meat can be an important source of nutrition for rural communities, wild meat does not often play a significant role in food security for urban dwellers, for whom it is a luxury item. Yet as urban populations grow, so does the demand for wild meat. Even low per capita consumption rates can add up to large total quantities of wild meat consumed, and urban demand is fueling increasing unsustainable offtakes in surrounding areas, contributing to heavier pressure on wildlife and a larger threat to the food supply of wildlife-dependent rural communities.

Available data shows that, for instance, the straw-colored bat (Eidolon helvum) in west and central Africa, and the chimpanzee (Pan troglodytes) in Cameroon and Nigeria have been available in large numbers across urban markets. Better transportation, availability of firearms and high financial incentives are amongst the drivers of increased urban access to wild meat.

Most CMS terrestrial mammal species are protected to varying degrees under current laws, with levels of protection fluctuating across species and countries. In many tropical countries, urgent reform of current hunting legislation is needed. This includes subsistence hunting practices that are often incompatible with hunting regulations.

From several case studies, two themes emerged: first, while CMS species may be protected under national and international laws, in many countries enforcement capacity and effort is low, and unregulated hunting therefore continues unabated. Secondly, species populations that experienced sharp declines due to over-hunting have recovered after legal protection and the enforcement of laws.

Recommendations and Implications for the Future:

This report contributes to the implementation of CMS Decision 13.109 – Addressing Unsustainable Use of Terrestrial and Avian Wild Meat of Migratory Species of Wild Animals. It was prepared for the CMS Secretariat by the Center for International Forestry Research (CIFOR).

Virtual Press Conference of the Launch of the Report

All members of the media are invited to attend a virtual media launch on Wednesday, 15 September 2021 at 15:00 CEST.

Please use the registration form to be able to attend the press conference.

Link to the Report:

An environmental treaty of the United Nations, the Convention on the Conservation of Migratory Species of Wild Animals (CMS) provides a global platform for the conservation and sustainable use of migratory animals and their habitats. This unique treaty brings governments and wildlife experts together to address the conservation needs of terrestrial, aquatic, and avian migratory species and their habitats around the world. Since the Convention's entry into force in 1979, its membership has grown steadily to include 132 Parties from Africa, Central and South America, Asia, Europe and Oceania.

Impacts of Taking, Trade and Consumption of Terrestrial Migratory Species for Wild Meat [Report]
New IPBES Assessment on Sustainable Use Confirms the Need to Address Major Threats to Reverse Current Trends of Loss of Wild Species
New Review Finds the Consumption of Wild Meat of Aquatic Megafauna Protected Under CMS to be Widespread Throughout the Tropics