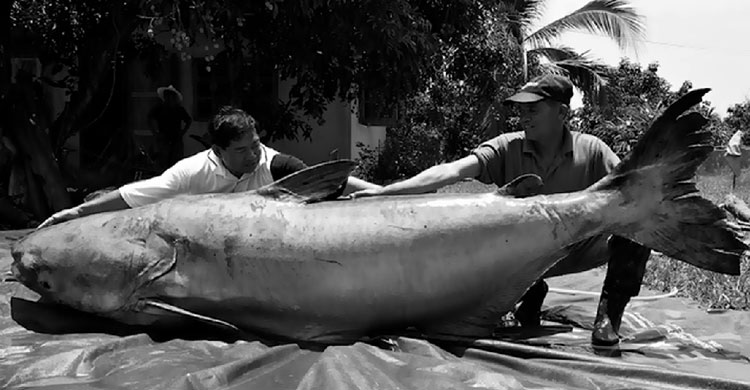 Bonn, 8 March 2016 - CMS Conference-Appointed Councillor for Fish and Assistant Research Professor at the University of Nevada-Reno, Dr. Zeb Hogan has spent the last 20 years studying the world’s freshwater ecosystems. He recently gave a presentation at TEDx event to highlight the ecological importance to large fish species in the Mekong river system and the need to save them from extinction.

Zeb was so amazed and curious about the “big fishes” that he decided to engage in a research project, discovering around 30 species of “Loch Ness monsters” or “mega-fishes”, as he calls them: Catfish, Giant Stingray and Giant Carp are some of the rare and incredible specimens that he found.

His studies led to a worrying discovery: about 70 per cent of these species are at risk of extinction and the causes are mostly overfishing, habitat loss, pollution and climate change.

Why do we need to save them?  The Mekong River in Asia, which is the 12th longest river in the world, crosses six countries and hosts a huge quantity and variety of fishes: two million tonnes of fish are harvested every year and if big fishes are starting to disappear, the river is in danger. The fish play an important role as indicators of the health of a river and food security for people. As such they are essential for human well-being.

Hogan emphasizes the need to save these fish and tells us how to do it. It is true that they are not very appealing, they look scary and frightening. However, when the movie “Jaws” came out 40 years ago, no-one liked sharks, but scientists managed to change people attitudes to these animals. Nowadays, some shark species are even protected.

Schools and children play an important role as future advocates of biodiversity.  Zeb had the occasion to teach Cambodian students and show them these species. Ten years ago nobody knew about them, but today the students can name different species of big fishes.

In other regions, other interest groups have contributed to species conservation.  There are good examples in Alaska and Mongolia, where fishermen, local businesses and environmental groups work together to save salmon and trout.

In 2015 Zeb was witness of the first catch of a giant Catfish near Phnom Penh: to confirm the coexistence between humans and fishes in the Mekong River, the fish was released into the water and Zeb drove it with his hands down into the deep.  As people depend on fishes, they must sustain them at healthy levels.