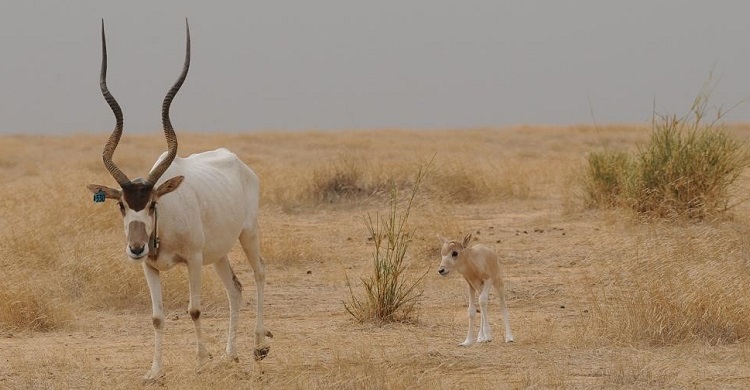 Bonn, 10 August 2020 - The Environment Agency — Abu Dhabi (EAD) announced that two Addax calves have been born in Chad. These calves are the first wild-born calves from a herd of 15 Addax, which were translocated from the United Arab Emirates to Chad in November 2019. These new-born calves give rise to renewed hope for the conservation of the Addax, which is on the verge of extinction.  Today, only 75 to 100 individuals remain in the wild.

H.E. Dr Shaikha Salem Al Dhaheri, Secretary General of EAD, said “These births are truly a reason to celebrate as the Addax is one of the rarest mammals on Earth and on the verge of extinction in the wild.

These new-born calves are a major milestone and give renewed hope to a species that desperately needs immediate conservation action to protect the remaining populations in the wild”.

These reintroduced Addax are serving as a pilot group and provide behavioural information to scientists. In March this year, another 25 Addax were translocated from Abu Dhabi to Chad, along with 25 Scimitar-horned Oryx (Oryx dammah), another migratory antelope species.

The Addax is a critically endangered antelope species listed on CMS Appendix I. Since its listing in 1979, the Convention has called on Range States to strictly protect the species by prohibiting taking. Over the past few decades, however, the Addax has continued to decline due to increasing threats such as poaching, regional insecurity, habitat loss and degradation. The birth of Addax calves by the reintroduced individuals in Chad, therefore, is a significant milestone for the conservation of the species.

The Scimitar-horned Oryx is also listed on the CMS Appendices. To restore the species’ numbers in the wild, the reintroduction programme in Chad began in 2016 under the leadership of the Government of Chad with the assistance of EAD and the Sahara Conservation Fund team. The reintroduced Scimitar-horned Oryx population has reached 288 individuals, following the birth of 33 calves so far this year. This programme is one of the most significant contributions to date to the implementation of the CMS Sahelo-Saharan Megafauna Concerted Action.

Under the Concerted Action, 15 Range States are continuing to protect the Addax, the Scimitar-horned Oryx and another six Sahelo-Saharan Megafauna species. At the last Conference of the Parties to CMS held in February 2020 in Gandhinagar, India, governments renewed their commitments to the conservation of these unique antelope species in arid and desert ecosystems.

To halt the extinction and reverse the current declining trends, all stakeholders need to work together.  The reintroduction project in Chad is an excellent example of partnership. EAD, the Government of Chad, the Sahara Conservation Fund, the Smithsonian Conservation Biology Institute (SCBI), the Zoological Society of London (ZSL), the Fossil Rim Wildlife Center, Marwell Wildlife, the Royal Zoological Society of Scotland, the European Union and the Saint Louis Zoo WildCare Institute have been working together on the ambitious programme.