Pollution in the World’s Oceans Threatens Millions of Marine Animals 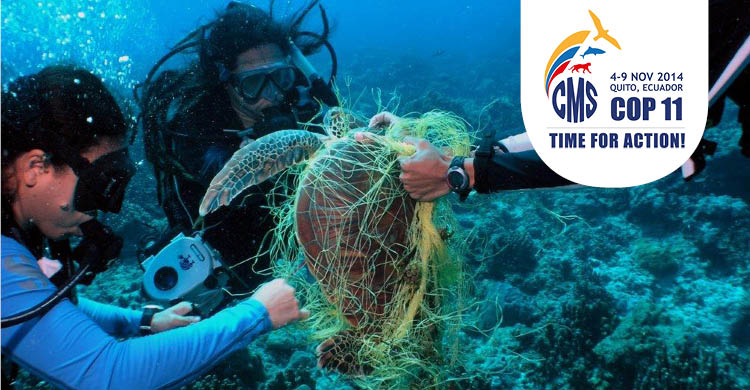 Quito, 5 November 2014 - A series of reports on the impact of marine debris on migratory marine species and ways to address this growing threat, are being presented at a major international wildlife conference taking place in Quito, Ecuador this week.

The report: “Migratory Species, Marine Debris and its Management” reveals the dramatic impact of marine pollution on migratory species. It is one of three reports on the topic being presented to governments at the 11th Conference of the Parties (COP) of the UNEP Convention on the Conservation of Migratory Species of Wild Animals (CMS), being held in Quito, Ecuador, 4-9 November 2014.

Millions of marine animals including migratory whales, dolphins, marine turtles, seabirds, seals, dugongs, sharks and rays which often cover vast distances across the world’s oceans are increasingly being injured or even killed by ingesting or becoming entangled in marine debris. 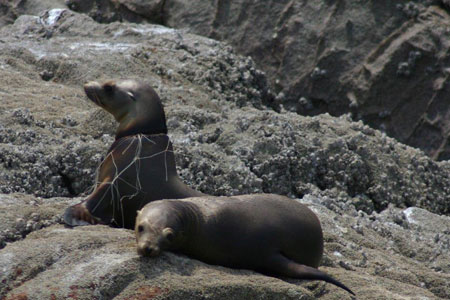 “The international community must respond to the growing problem of marine debris and take decisive action to reduce the threat marine debris is posing to many migratory species and to the ecological balance of our oceans as a whole”, said CMS Executive Secretary, Bradnee Chambers.

In the reports, scientists recommend that preventing waste from reaching the marine environment is likely to be one of the most effective ways to address this problem.  Countries will consider improving effective waste management on land and to take measures to prevent commercial shipping operators from disposing of garbage at sea.
According to the reports, 192 species, comprising 45 per cent of marine mammals including 58 per cent of all seals, 21 per cent of seabirds and all species of sea turtles have been shown to be affected by entanglement.

Ingestion has proven to be even more dangerous: 26 per cent of all marine mammals, 38 per cent of seabirds and 86 per cent of all turtle species die after swallowing marine debris. Animals might drown or suffer from internal bleeding upon ingestion of sharp items. Marine debris can also have an impact on the animal’s ability to feed due to reduced volume in its stomach, which leads to starvation. Also, disease can arise when the immune system is permanently damaged.

Boyan Slat, who raised more than US$ 2 million as founder and CEO of The Ocean Cleanup, addressed delegates at the opening of the COP. He said: “In the past few decades, oceanic plastic pollution has turned into a major economic, ecological and human health threat. Like migratory species, plastic pollution doesn’t respect borders. Hence, global collaboration on the adoption of technological and legislative solutions is urgently needed”.
According to the reports, awareness and action campaigns concerning marine debris can be powerful tools to motivate the public to be part of the solution and support any new economic instruments or regulatory measures.

Targeted campaigns to highlight the impact of marine debris on migratory species can bring about a behavioural change.

The he North Atlantic Right Whale is one of the species most affected by entanglement and with only 500 animals left, it is threatened with extinction.  Four other baleen species, also listed on the CMS Appendices also susceptible are the Humpback, Fin, Blue and Bryde’s Whales. In some populations, up to 65 per cent of the animals show signs of past entanglement in marine debris. An average of 23 per cent of the population of those entangled animals was estimated to be killed. Ingestion led to the intestines being crushed resulting in fatalities of Sperm Whales. Toothed whales tend to ingest debris during play, exploration or feeding. Bottlenose Dolphins and Sperm Whales are known to have suffocated upon swallowing fishing nets.

One per cent of seals, including the Harbour Seal and the Grey Seal are estimated to become entangled with an average mortality rate of almost 50 per cent. Plastic was found in the stomach of 11 per cent of seals in the North Sea. High body burdens of PCBs, industrial products or chemicals, were found in Baltic Grey Seals, which damaged the immune function and are suspected as a cause for the mass mortalities due to virus infection in the 1980s.

A quarter of dugongs in Australia that were recorded as being entangled in nets or ropes died as a result.  The West African Manatee and the Amazonian Manatee are also being affected.

The intestines of turtles can be blocked upon swallowing plastic, which can lead to starvation. Twenty-five per cent of marine turtles in the Canary Islands were probably killed as result of entanglement. One quarter of them had one or two flippers severed. A fish hook embedded in the jaw causes infection and the resulting abscess can lead to loss of teeth.

A stomach full of plastic prevents birds from accumulating the necessary fat to cross the sea or the desert.  The White-chinned Petrel and Laysan Albatross are particularly badly affected, with 97 pe cent of the chicks of the latter found to ingest plastic. This increases threats to the survival of migrant seabirds. Petrels retain plastic in their stomach for months, which accumulates in their guts. PCBs have been shown to accumulate in seabirds such as the Great Shearwater, which reduces breeding success.

The Convention on the Conservation of Migratory Species of Wild Animals (CMS) aims to conserve terrestrial, aquatic and avian migratory species throughout their range. It is an intergovernmental treaty, concluded under the aegis of the United Nations Environment Programme, concerned with the conservation of wildlife and habitats on a global scale. To date 120 Parties have ratified the Convention.

CMS, ASCOBANS, the International Whaling Commission (IWC), the National Oceanic and Atmospheric Administration (NOAA), the United Nations Environment Programme (UNEP), the Food and Agriculture Organization of the UN (FAO) are all working to address this global threat.
www.cms.int