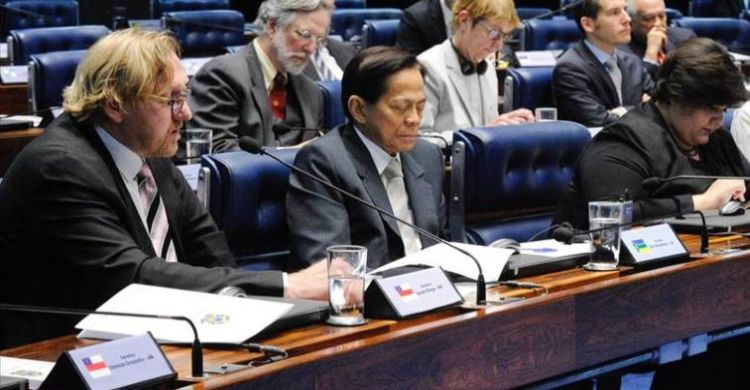 Bonn, 11 May 2016 – CMS Executive Secretary, Bradnee Chambers, has just completed a busy visit to Brazil, which became the 122nd Party to CMS in October last year.

First, Mr Chambers addressed the Brazilian Senate, having been invited as a special guest to speak on biodiversity and synergies between MEAs and explained how CMS worked and what its immediate priorities were.  He also discussed with the Minister and the Ambassador for the Environment how the Convention, to which Brazil acceded as recently as October last year, could be used to develop conservation policies in the country further.

Moving on from Brasilia to Rio de Janeiro for the World Environmental Law Congress, the Executive Secretary shared the platform with Professor Thomas Lovejoy of the George Mason University, Virginia, USA to give the keynote opening address.   The Congress, held every four years, brings together judges, lawyers, legislators, academics and officials.

Mr Chambers said “The World Environment Law Congress provides a rare opportunity for conservationists to speak to an audience of judges and lawyers.  The plethora of MEAs means that the international community has at its disposal the building blocks needed for implementing effective global policies to protect the natural environment.  What we could do more effectively is deploy these instruments – turning the building blocks into a coordinated structure that could act as a bulwark against the threats the environment is facing from climate change, habitat loss and wildlife crime.”

In his address, Mr Chambers called for policies aimed at conserving biodiversity to be integrated into mainstream policies as one means of ensuring that development was conducted in sustainable way and not at the expense of the environment.  He also highlighted aspects of the biodiversity crisis which was seeing many iconic species such as elephants, gorillas and addax antelopes being driven to the brink of extinction.

The visit was rounded off with Mr Chambers co-chairing a panel discussion on wildlife crime alongside Simon Stuart, the chair of the IUCN’s Species Survival Commission, the body responsible for the IUCN Red List of Threatened Species.  Two prosecutors – one from Brazil and another from Panama – gave presentations explaining their work, while a Law Professor from Singapore brought a different regional perspective to the proceedings.  Juan Carlos Vasquez from the CITES Secretariat described his organization’s work, particularly its collaboration with the International Consortium on Combating Wildlife Crime (ICCWC).