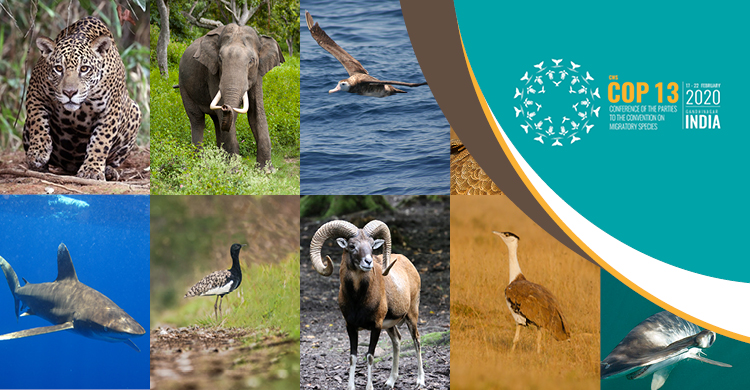 India COP kicks off the “super year for nature”

Thirteenth Conference of the Parties to the Convention on Migratory Species (CMS COP13) to focus on adopting actions to help reverse the decline of migratory species. CMS COP13 will bring together Ministers, high-level officials, CMS partners and other stakeholders from all over the world. It will be attended by several heads of UN treaties that deal with nature, as well as CMS Ambassadors and celebrities. CMS COP13 will add new species for protection and also address emerging issues and threats. 10 new species are expected to be added to CMS, including the Asian Elephant and the Great Indian Bustard – which is the mascot of COP13. Concerted actions with targeted conservation plans are proposed for 14 species. Emerging threats such as light pollution, plastics pollution in terrestrial and freshwater environments and impacts of roads and railways will also be addressed. Indian Prime Minister Narendra Modi will inaugurate COP13, the first time the head of government hosting the CMS conference has opened a CMS COP, marking the importance of migratory species to India. This will be the largest CMS COP ever, with over 2,500 registered participants, including representatives of 111 of 130 CMS Parties, and nine other countries.
Gandhinagar, 17 February 2020 - The Thirteenth Meeting of the Conference of the Parties to the Convention on the Conservation of Migratory Species of Wild Animals (CMS COP13) opened in Gandhinagar, India today.
The Conference kicks off ‘the super year’ for nature, which will include a UN Summit in September and culminate in the UN Biodiversity Conference at the end of 2020, when a new global biodiversity strategy for the next decade will be adopted - the Post-2020 Global Biodiversity Framework.
The concept of ‘ecological connectivity’ is the top CMS priority for the Post-2020 Framework, which calls for the protection and restoration of important geographical areas that together support migratory species during the different phases of their natural lifecycles, such as breeding and feeding.
Deliberations at CMS COP13 in India will focus on how best to protect migratory species in a rapidly changing world.
The UN Global Assessment Report on Biodiversity released in May 2019 (IPBES Report1) found that we are in danger of losing 1 million species to extinction, including migratory species, if we do not step up our actions.
A new report to be released at CMS COP13 indicates that despite some success stories, the populations of most migratory species covered by CMS are declining.
International cooperation is required to protect migratory species and their habitats, which is reflected in the COP13 theme: Migratory species connect the planet – together we welcome them home.
Migratory species bring multiple benefits to humans. For example, migratory species provide seed dispersal, pollination, pest control and other ecosystem services and functions.  They also provide major economic benefits and jobs, for instance, through tourism.
CMS Executive Secretary Amy Fraenkel said: “COP13 comes at a critical time for wildlife conservation, with continued downward trends of habitat loss and species decline. The Convention on Migratory Species is the only multilateral treaty dedicated to addressing the needs of migratory species and their habitats on a global scale. The conference will set in motion actions needed to better protect migratory species that rely on multilateral cooperation for their survival.”
Minister of Environment of India H.E. Prakash Keshav Javadekar said: “CMS is very important to India. The Convention is at an exciting moment of development and the COP in India will mark the start of increased attention to migratory species and their habitats.  Migratory birds, mammals and aquatic species are increasingly in danger on their migration routes and countries need to work together to protect them.  For India, caring about these species is part of our ethos to protect all animals and natural life on earth. India is very happy to host CMS COP13.”
Joyce Msuya, Deputy Executive Director at the UN Environment Programme said:  “As we face the unprecedented crisis of species loss, 2020 is an important year to step up action to conserve species, protect ecosystems and make meaningful progress towards achieving the sustainable development goals. We must seize every opportunity we have, and the CMS COP is critical milestone in enabling biodiversity to flourish on this planet.”
CMS COP13 will add new species for protection under CMS and also address emerging issues and threats:
Ten new species are expected to be added to CMS, including the Asian Elephant, Jaguar and the Great Indian Bustard – which is the mascot of COP13.
These include proposed additions to Appendix I – which provides the strictest protections, for the Asian Elephant, Jaguar, Great Indian Bustard, Bengal Florican, Little Bustard, Antipodean Albatross and the Oceanic White-tip Shark.
The Urial, Smooth Hammerhead Shark and the Tope Shark have been proposed for Appendix II, which covers migratory species that have an unfavourable conservation status and that would benefit from enhanced international cooperation and conservation actions. Concerted actions with targeted conservation plans are proposed for 14 species. For a full list of Concerted Actions, please click here.
CMS COP13 will also consider the following, inter alia:
Launch of CMS Ambassadors Programme
A new CMS Ambassadors Programme will be launched today to advocate the cause of migratory species and the importance of CMS. Three new Ambassadors will be announced for terrestrial, avian, and aquatic species.
Special Issue of UN Stamps to Feature Migratory Species
A special set of stamps issued by the United Nations Postal Administration (UNPA) in a collaborative project with CMS  the Convention on the International Trade in Endangered Species (CITES) will be presented to delegates at CMS COP13. The stamps, featuring migratory species listed on the Appendices of both CMS and CITES, will be launched globally today and available at UN Headquarters in New York, Geneva and Vienna.
1The IPBES Global Assessment Report on Biodiversity and Ecosystem Services: http://bit.ly/GAMediaRelease