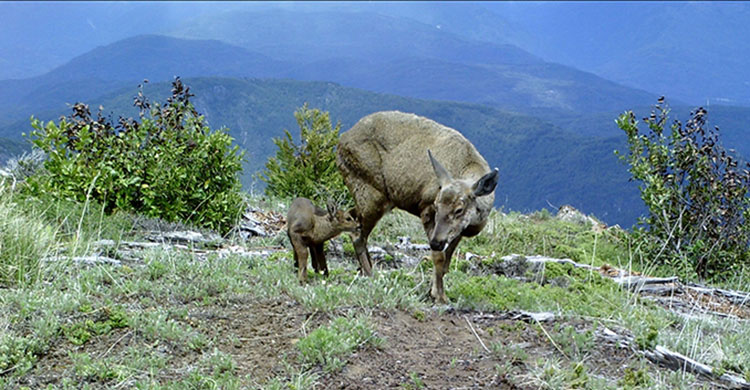 Bonn, 19 October 2020 - A bilateral project funded in the Rio Puelo River Basin of northern Patagonia has confirmed the presence of groups of endangered Huemul or South Andean Deer (Hippocamelus bisulcus) in two sites - Lago Azul and Las Horquetas - Los Patos, part of a cross-border population shared by Argentina and Chile.

This initiative helped implement one of the activities foreseen in the binational action plan for the Huemul, namely to update the distribution map for the species. It also represented the first major progress in addressing the long-recognized problem of the lack of information about the species’ conservation status in northern Patagonia.

The information provided by this binational project, especially in the area of Northern Patagonia, has generated a significant contribution to our knowledge of the species, increasing the possibilities of implementing more efficient management measures for its conservation, within the framework of the Binational Argentinean-Chilean Action Plan for the Conservation of the Southern Huemul and the Specific Additional Protocol on the Conservation of Shared Flora and Fauna between the Republic of Argentina and the Republic of Chile, signed under the umbrella of the Environmental Treaty between both countries.

Among the project’s aims were to assess the population status of the Huemul in the Puelo River Basin, to identify human activities in the territory, in order to understand the relationship between Huemul distribution and those activities and to revitalize cooperation between Chilean and Argentine partners.  The activities undertaken included fieldwork involving the setting of 48 camera traps at elevations of between 425 and 2,280 metres, interviewing people from local communities and holding a meeting involving regional partners working on the conservation of the Huemul in the Puelo River Basin.

The range of the Huemul is restricted to Argentina and Chile.  The species is classified as Endangered on the IUCN Red List and was added to Appendix I of CMS at COP5 in 1997.  A Memorandum of Understanding concluded under the Convention on Migratory Species was signed in 2010 under the bilateral protocol between Argentina and Chile on the conservation of wild fauna and flora of 2002 and the Environment Treaty of 1991.  The CMS Secretariat serves as depositary and strategic guidance for coordinating conservation actions on the Huemul is set out in the Binational Action Plan.

In fact, this activity, led by the private sector, marks a turning point for the execution of initiatives undertaken by Chile, and gives a new impulse to the management and development of priority actions identified in the Action Plan prepared for 2012. For the National Forestry Corporation, the next step will be the creation of a national technical group made up of professionals from the public and private sectors who will be able to formulate projects aimed at reducing threats, improving the health of the species and integrating public-private efforts that have arisen from the management carried out both in the State's Protected Wildlife Areas and in those promoted on private and public lands where Huemul are present.

Once common over much of south-western South America, the range of the Huemul has been considerably reduced, partly as a result of human activities (mainly extensive livestock farming and its consequences) and partly through competition from invasive alien species, such as the larger Red Deer. Recent population estimates for this species range from a little over 1,000 to a maximum of 1,500.  Interviews with local communities revealed that the Huemul was far more common as recently as the 1980s and 1990s and provided some evidence of poaching.

A one-minute video with footage of Huemuls in the Rio Puelo region has been posted on Youtube by the project partners and can be accessed here.

CMS to Join the Second Phase of CounterMEASURE to Investigate Impact of Plastic Pollution on Migratory Species
T15 F - Monitoring and evaluation, including indicators, milestones and feedback to the sub-targets, as well as headline measures of success by which overall success of the SPMS may be judged
Scientific Council (ScC)