From Prey to Protected Species: How the Tide Turned for the Amur Falcon 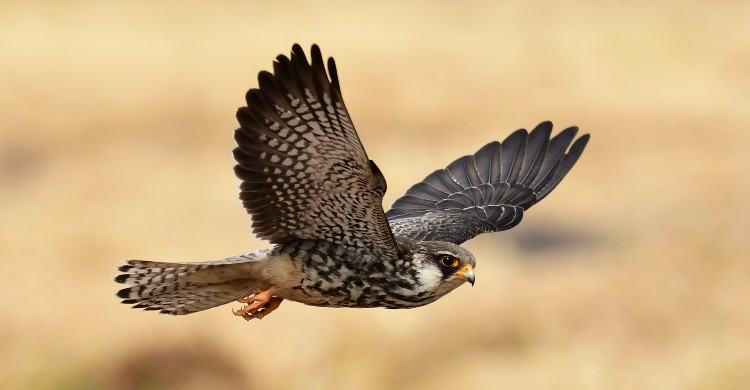 Abu Dhabi, 10 November 2020 - In October each year, communities in the mountainous parts of Northeast India, gather in anticipation of the arrival of a small grey bird, the Amur Falcon, which annually migrates over 30,000 km.

The Amur Falcon’s arrival has sparked excitement and joy within these communities, who not long ago, were hunting the species. In 2012, the Amur Falcon was targeted at such mass scale in the State of Nagaland, it set off a massive outcry among environmentalists across the world. It was discovered that Amur Falcons were being illegally harvested for consumption and sale in markets by the local population who had lost their agricultural land due to a dam development.

By 2013, authorities, religious leaders and youth groups had stepped in to persuade local people to provide safe passage to the birds, which spend a month in the area, normally in October - November, before continuing their migration from Siberia, China and Mongolia onto the southern parts of Africa. In the years following, the villagers themselves have adopted measures to punish hunting and to protect the birds’ habitat.

The story may have started in the Nagaland State of India, where large colonies of the birds were discovered, but it does have a link to the United Arab Emirates, said Dr. Suresh Kumar, one of the key researchers and main champions of the Amur Falcon in India.

Dr. Kumar, is a scientist at the Wildlife Institute of India, a state-funded research institution which, following the news about the wide-spread targeting of the Amur Falcon, had been asked by the Indian Ministry of Environment and Forests to help outline protective measures. In September 2013, Dr. Kumar was visiting the UAE capital to discuss another raptor, the Saker Falcon, as part of a global initiative, coordinated by the Abu Dhabi Office of the UN’s Convention on Migratory Species.

During the meeting, Dr. Kumar reached out to Nick P. Williams, Head of the Coordinating Unit of the Raptors MOU, an agreement to protect endangered raptors under the auspices of CMS. CMS Office – Abu Dhabi is the only regional hub for the Convention outside its headquarters in Germany and is fully hosted by Environment Agency — Abu Dhabi on behalf of the Government of the United Arab Emirates.

The Abu Dhabi meeting was the starting point of a communication with CMS Office — Abu Dhabi about funding a small expedition to capture several Amur Falcons and fit them with satellite tags later that year in Nagaland.

On 4 November 2013, an expedition comprising of Dr. Kumar, Mr. Williams, two Hungarian experts, and two local forest officers set out to do just that. They discovered a colony impressive in size. Three birds were tagged, while a further 27 were fitted with metal and plastic leg-rings. One of the objectives of the scientists was to find out whether there were other sites where Amur Falcons were flocking in similarly large numbers. Another objective — and one which turned out to be instrumental in achieving the support of local people — was to create awareness about the long migratory journeys of the birds, journeys in which Nagaland was just one stop.

“Even people who are educated cannot connect the geography because there is no visual element,” said Dr. Kumar. “How do you expect to tell this to the local communities who do not know anything beyond their village or beyond that mountain range.”

Over the three years that the transmitters were working and submitting coordinates, Dr. Kumar kept the media and community leaders informed. The generated excitement prompted villagers from other areas in the state to alert the scientist about additional large colonies.

The community in Yaongyimchen village is still tracking “Longleng” a female Amur Falcon, who was tagged in 2016 from the roost site in Yaongyimchen Community Reserve in Longleng district. 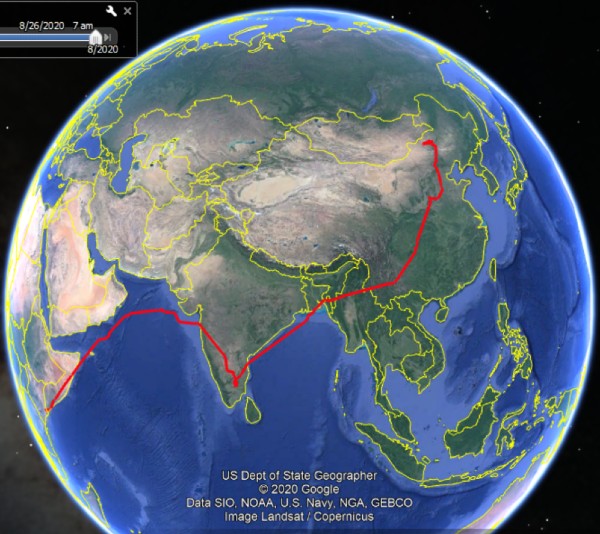 The maps of the birds’ subsequent journeys generated excitement and captured the imagination of the local people. “In this whole process, people were learning about the geography where these birds were passing through,” he said. “They started getting emotionally attached to the birds.”

This year, in celebration of World Migratory Bird Day 2020, communities gathered to welcome the Amur Falcons home to Nagaland and in fact many other parts of the adjoining landscape. 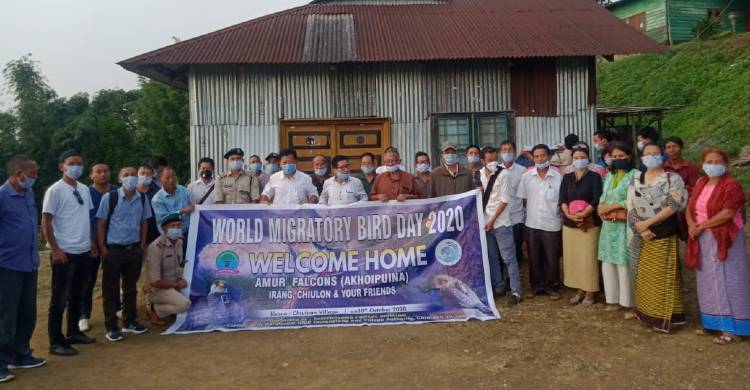 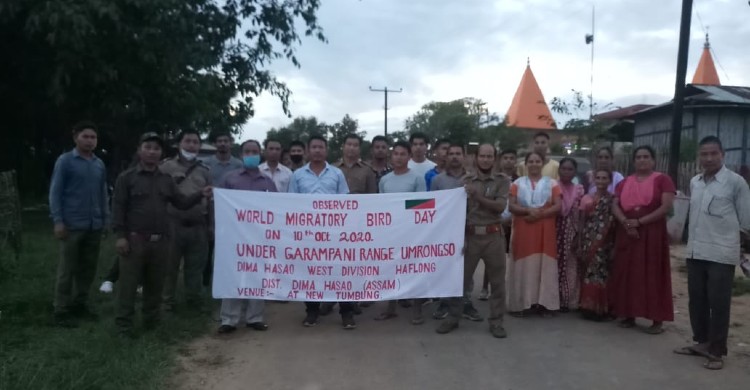 The public awareness momentum generated because of this initiative has inspired the local population to act. While hunting is banned in India, the Northeastern part of the country has long been an exception. However, in 2019 people in some villages in the area took the initiative to pass resolutions imposing fines on hunters and banning the cutting of trees. In other areas, local people volunteered to patrol known Amur Falcon sites during the birds’ annual visit to protect the species. 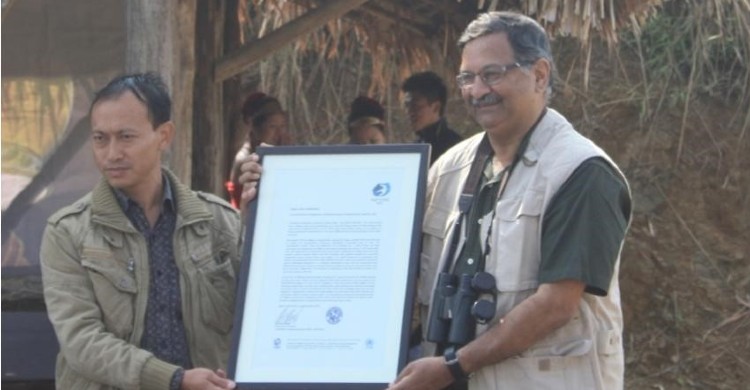 An appreciation letter from the CMS Raptors MoU was presented in November 2015 to Pastor Nuklu Phom, Community leader of the Yaongyimchen village in Longleng district by Dr. V.B. Mathur, former Director Wildlife Institute of India in recognition of the efforts to protect Amur Falcons. © Suresh Kumar

Furthermore, the data collected over the last six years has given the scientists involved in the project a very clear understanding of the Amur Falcons’ migratory routes, as well as an answer to the question why the birds converge in such great numbers in Nagaland, Manipur and other mountainous parts of Northeastern India. The abundance of termites in September and October makes the area a preferred refueling site for the birds before they continue their flight across the Arabian Sea to the African continent. In addition, the birds are not connected to specific sites in this part of India but seem to change preferences, most probably depending on the availability of food.

“The emergence of termites perfectly coincides with the arrival of the falcons, it is all so beautifully interlinked,” said Dr. Kumar.

In turn, the termites are dependent on the annual monsoon, which brings a lot of rain and humidity in this part of India. “With changes in the Earth’s climate affecting rainfall patterns as well as the monsoon, the fate of the Amur Falcon and its future presence in Northeast India cannot be taken for granted”, said Dr. Kumar.

Understanding the Amur Falcon’s migratory routes and engaging local communities to be actively involved in their conservation, are both critical to ensure the long-term survival of this species, especially in the context of climate change and habitat destruction. This project has raised international awareness and has shown how one small bird connects countries along its migratory pathway and can inspire action along the way.