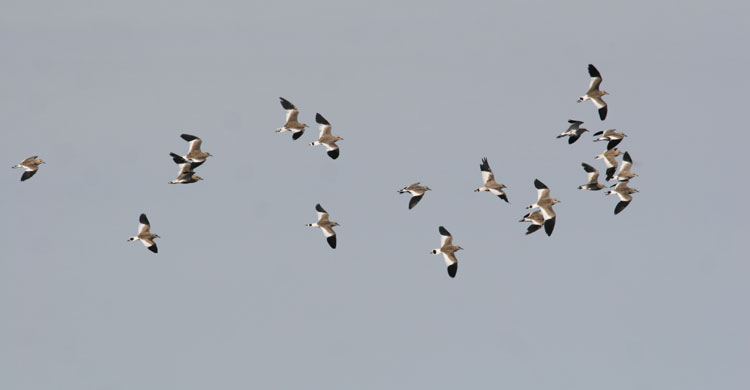 Sharjah, 7 September 2018 – International experts met in Sharjah, United Arab Emirates, to develop a strategy for the Arabian Peninsula to monitor the region’s waterbirds and their threatened wetland habitats. The regional strategy aims to build capacity to monitor coastal waterbirds and important wetland sites in all countries of the Arabian Peninsula.

The workshop, held 5-6 September, provided the opportunity to share the countries’ experience and take stock of existing initiatives, capacity, and lessons-learned. The draft strategy will be presented at the 13th Meeting of the Ramsar Conference of the Parties taking place in Dubai, 21-29 October 2018.

Prior to the workshop, participants completed a survey concerning the status of waterbird and wetland monitoring and identifying gaps and needs. The responses were the basis of country reports.

The initiative will result in a coordinated regional approach to: (1) produce waterbird population estimates with an initial focus on inputs into the International Waterbird Census; (2) identify, document and monitor changes in ecological status of internationally important wetlands (critical sites); and (3) develop a situation analysis for the region’s coastal wetlands.

Lyle Glowka, Executive Coordinator of the Office, stated: “A coordinated regional approach to waterbird monitoring is critically important to support implementation of the Convention on Migratory Species and the African-Eurasian Migratory Waterbird Agreement both of which promote a flyway approach to the conservation of migratory birds. The strategy will also support implementation of the Ramsar Convention on Wetlands.”

The Arabian Peninsula lies along the West Asian - East African Flyway. According to Wetlands International, this part of the flyway has the lowest number of waterbird populations with known trends compared to other flyways. It is also where the proportion of declining waterbird populations is the highest amongst the populations with known trends. The strategy will close this knowledge gap and provide baseline and other information as a basis for decision-making and support conservation critical to the future of the Arabian Peninsula’s coasts.

Population declines of waterbirds act as a warning indicator of the deterioration in ecosystem health, associated loss of value in ecosystem services, and loss of economic potential of the rich natural ecosystems of the Arabian coasts. The decline in waterbird population can be attributed to threats significant to migratory birds along flyways as identified in the CMS Flyway Review.

The United Arab Emirates is the only country in the Arabian Peninsula with an annual national waterbird-monitoring scheme and regularly participates in the International Waterbird Census. Creating national monitoring schemes in each country would assist in mobilizing data that could support conservation actions, enable annual contributions to the International Waterbird Census and contribute to coordinated information exchange within and between countries as well as other actions along the flyway.

The Environment and Protected Areas Authority (EPAA) in the Emirate of Sharjah hosted the two-day event in association with Wetlands International and BirdLife International.

50th International Waterbird Census – Let’s Make It Count
CMS Office - Abu Dhabi: A Decade of Achievements
T10 F - Monitoring and evaluation, including indicators, milestones and feedback to the sub-targets, as well as headline measures of success by which overall success of the SPMS may be judged