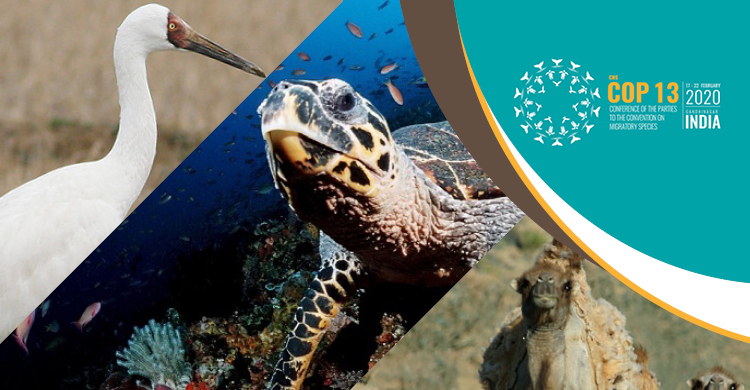 Gandhinagar, 19 February 2020 - A preliminary review of the conservation status of CMS-listed migratory species will be presented to CMS COP13 today, highlighting priority areas for further development.
Key findings from the review show:
The preliminary review is based on information from the IUCN Red List database, and also includes analysis for CMS-listed species of a few widely used indicators:  trends in protected area coverage of Key Biodiversity Areas identified for migratory species; the Red List Index of CMS-listed and migratory species; and the Living Planet Index for species listed on the CMS Appendices.
It was produced by the CMS Secretariat, in consultation with the Scientific Council with a view to delivering a flagship report, pending further resources. While the preliminary nature of the review suggests caution in drawing conclusions at this stage, areas for further development have been identified. These include:

- differences in the conservation status of individual populations or management units;

- the importance of the protection provided by the listing on Appendix I for the conservation of the species and its individual populations;

A number of key factors need to be considered:

1 Defined in the IUCN – CMP Unified Classification of Direct Threats as “Threats from consumptive use of “wild” biological resources including both deliberate and unintentional harvesting effects; also persecution or control of specific species”.

2 With reference to the IUCN classification of threats, this includes hunting and collecting terrestrial animals and fishing and harvesting aquatic resources at both small and large scales, when the species being assessed is the target (threats coded 5.1.1, 5.4.1, 5.4.2)

3 Examples of persecution/control include wolf control, pest control, persecution of snakes because of superstition, beach protection with sharks nets, sharks and seals killed because they eat commercial fish species, etc.