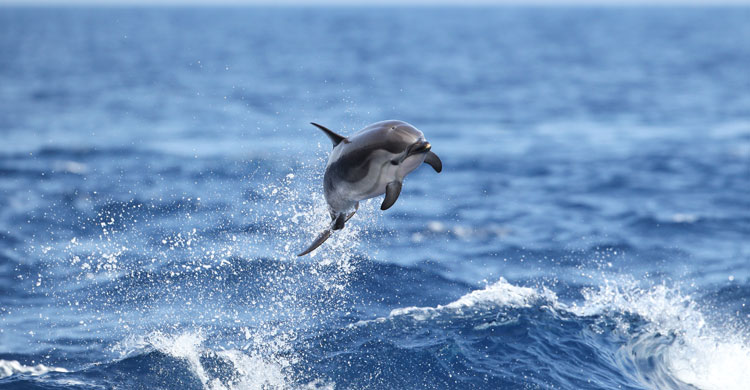 Of the 21 species sighted at least once in the Mediterranean and Black Seas, eleven are considered to be regularly present and most of them are classified as “Endangered”, one of the highest categories of the IUCN Red List of Threatened Species™. The threats faced by the Mediterranean’s whales and dolphins include the risk of collisions with maritime traffic, bycatch in fishing gear, habitat degradation, acoustic disturbance and chemical pollution.

To improve understanding of the conservation status of cetaceans in the Mediterranean, the Permanent Secretariat of the Agreement on the Conservation of Cetaceans in the Black Sea, Mediterranean Sea and Contiguous Atlantic Area (ACCOBAMS) has developed and is coordinating the implementation of the multi-million euro “ACCOBAMS Survey Initiative” (ASI).  The Permanent Secretariat is benefitting from the support of a Project Steering Committee composed of the Regional Activity Center for Specially Protected Areas (UNEP/MAP/SPA-RAC), the IUCN Center for Mediterranean Cooperation, the French Agency for Biodiversity, the Italian Institute for Environmental Protection and Research and the PELAGIS Observatory of the University of La Rochelle in France.

“This project represents an innovative and unprecedented effort to improve conservation of cetaceans and their habitats. The integrated and coordinated programme will contribute to both the UN’s Sustainable Development Goal for the Oceans (SDG 14) and the CBD’s Aichi Biodiversity Targets and Strategic Plan”.

Declaration of H.E. Mr. Xavier Sticker, Chair of ACCOBAMS and Ambassador of France for Environmental Matters.

A major element of this unprecedent initiative will be the first synoptic survey of the entire Mediterranean combining aerial and ship-based methods and passive acoustic monitoring, which will take place in June and July 2018.  Five research vessels and eight aircraft will be deployed with almost one hundred scientists from the whole region.  A training workshop was held from 23 to 28 May at the Cuers Aerodrome in France to provide instruction to 40 aerial observers. Another training workshop was held from 18 to 22 June in Samos, Greece, for 20 boat-based observers. Capacity-building is a key component of the ASI.

The ASI is supported by the MAVA Foundation, the Prince Albert II of Monaco Foundation, the International Fund for Animal Welfare, the Ministry of Ecological Transition of Spain, the French Agency for Biodiversity, the Ministry for the Protection of the Environment, the Territory and the Sea of Italy and the Government of the Principality of Monaco, as well as by all riparian countries through the mobilization of their national scientists.

To find out more about the “ACCOBAMS Survey Initiative”, visit the ACCOBAMS website.