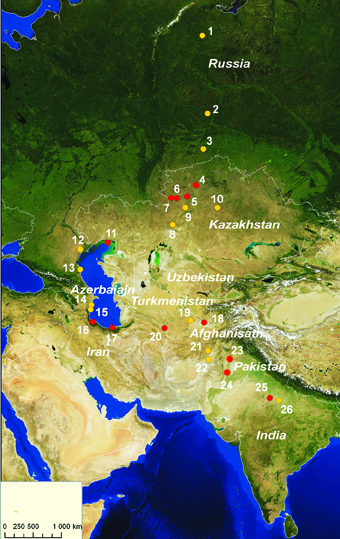 Ten sites from five countries (India, Iran, Kazakhstan, Turkmenistan and Uzbekistan)  were formally accepted into the WCASN at the launch ceremony in Kazakhstan on 18 May 2007 . The sites were nominated by national representatives of each of the countries. Certificates were presented at the launch by Mr. Khairbek Mussabaeyev, Deputy Chairman, Forest and Hunting Committee of the Ministry of Agriculture, Republic of Kazakhstan, and by Mr. Douglas Hykle, Senior Advisor of the Secretariat of the Convention on Migratory Species (CMS).

Two sites from Pakistan were designated for including in the WCASN at the lunch ceremony in Germany on 8 June 2010. Certificates were handed to national representative from Pakistan by Mrs. Elizebeth Mrema, Executive Secretary of CMS.

Designated and proposed WCASN sites (as to June 2010)