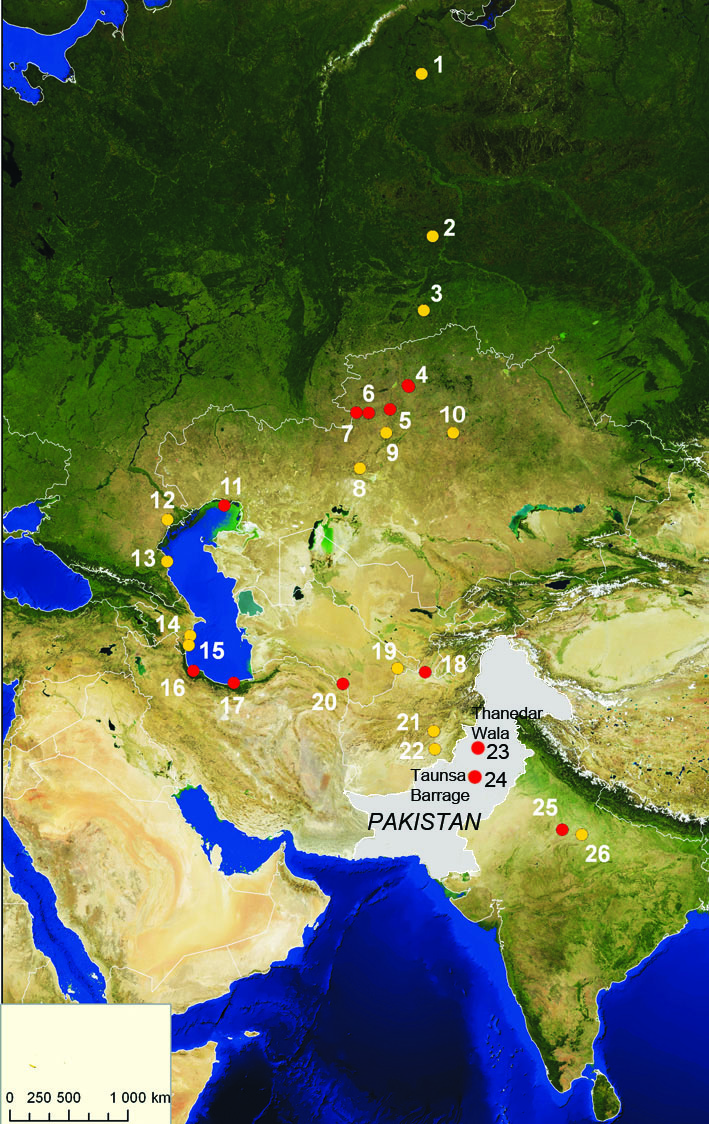 Pakistan lies on the longest Siberian Crane flyway – Central Flyway. Siberian Cranes have historically had the same flyways as Eurasian and Demoiselle Cranes and most other waterbirds. They flew over the Indus River Valley and then might have used the routes through Dalbandin, Zangi Nawar and Zaro in the Balochistan Province and through the D.I.Khan and Zhob in the North West Frontier Province (NWFP) and Balochistan Province during their migration. In the southern part of Pakistan the majority of cranes are seen on the Indus River between Taunsa Barrage and D.I.Khan and on small rivers west of the Indus (like Zhob, Luni, Kashu and Kurram) flowing through the districts of Zhob, D.I.Khan, Bannu and Parachinar, respectively (Ahmad 1991).

There are a few sightings of Siberian Cranes in Pakistan along the flyway to and from India. Most of these data are reports of sightings by villagers and crane hunters while they were camping along rivers, and the only sighting by a professional biologist was a report by Mr. Ashiq Ahmad. None of them have been observed with absolute certainty except the sighting by a hunter who killed a Siberian Crane on the Zhob River in March 1987 and produced its head and legs as evidence that it was a Siberian Crane (Jan & Khan 1995).

The most significant wetlands along these flyways are the Taunsa Barrage Reservoir in Punjab Province and Thanedar Wala Game Reserve in North West Frontier Province.

Map of Siberian Crane sightings in Pakistan (extract from Atlas of Key Sites for the Siberian Crane and Other Waterbirds in Western/Central Asia (2010) [PDF 1,210 KB]