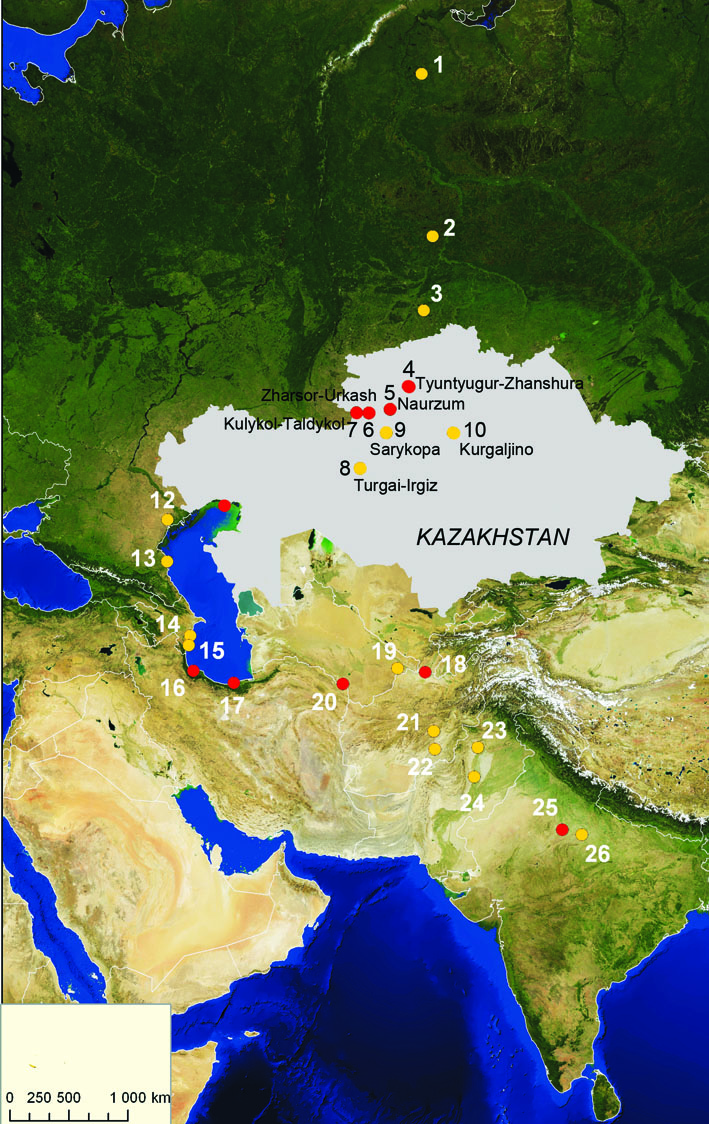 Kazakhstan is the only country where long-term migration stopovers of Siberian Cranes are known. They can stay here for up to 1.5 to 2 months. Migration stopovers are used by both Western and Central Asian flocks.

Historically, Siberian Cranes were regularly recorded in a number of regions in Kazakhstan: The Naurzum Lake System and lakes in the Turgai Lowland of the Kostanay Region in north Kazakhstan, the Kurgaljino Lakes in central Kazakhstan, the north and east coast of the Aral Sea, the north Caspian Sea coast, and the Ural Delta in western Kazakhstan. Most intensive migration went through Naurzum, the Turgai Lowland, and the Kurgaljino Lakes.

Since the middle of the last century, 95 sightings, with known data and with a total number of 338 to 344 birds, were registered in the territory of Kazakhstan. More than 60% of all Siberian Crane sightings in Kazakhstan were recorded in Naurzum Nature Reserve, where regular monitoring has been conducted since 1933, when the nature reserve was established. Moreover, during the last 20 to 25 years Siberian Cranes were sighted mostly in Naurzum, with the exception of a record of two Siberian Cranes in a flock of Demoiselle Cranes in West Tien Shan in  2005.

Since 1998, thanks to efforts of the International Crane Foundation and the Convention on Migratory Species, Siberian Cranes have been recorded annually in Kazakhstan despite the Western/Central Asian population number having been at a critical level.

Since 2003, regular monitoring has also been conducted under the UNEP/GEF Siberian Crane Wetlands Project at all five project sites: Naurzum, Zharsor-Urkash, Kulykol-Taldykol, Tyuntyugur-Zhanshura Lake Systems and in the Ural Delta. All these sites are included in the Western/Central Asian Site Network for the Siberian Crane and Other Waterbirds.

Map of Siberian Crane sightings in Kazakhstan (extract from Atlas of Key Sites for the Siberian Crane and Other Waterbirds in Western/Central Asia (2010) [PDF 2,536 KB]