Designated on 18 May 2007 in Almaty, Kazakhstan 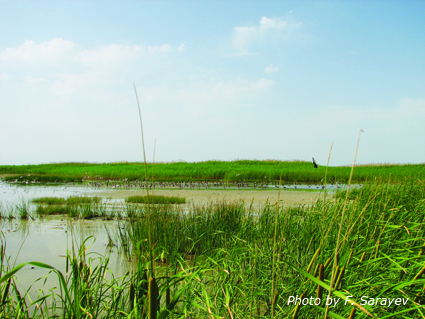 Overview: The site is a freshwater system of river channels and lakes with a dominant depth of 1.5-3.0 m. It includes wide delta, resulting in slightly saline water with a depth of up to 2.5-3.5 m. The site also includes a group of coastal peninsulas and the Peshnoy, Zyuydestova and Nordostova Shalygi Sea Islands. In the delta area the land and shoals overgrow abundantly with reed and cattail, and on the higher areas grow some marginal shrubby and woody plant communities.

Importance for the Siberian Crane: In the past (the end of 19th to the beginning of the 20th century) the site was a stopover location for single birds and small groups of Siberian Cranes during the spring and autumn migrations. At present, according to information received from the locals (requiring verification and confirmation), Siberian Cranes stop on the site very rarely during the autumn migration (not more than one registered per 10 years). According to information from a local ranger, one adult Siberian Crane was recorded in September 2002 in the east end of Peshnoi Peninsula. In 1999, the spring migration of the Siberian Crane marked with a satellite transmitter passed 100 to 150 km west of the town of Atyrau.

Importance for other waterbirds: On the adjacent desert territories of the site 2-5 pairs of Demoiselle Cranes nest annually.

The site regularly supports 150,000 breeding waterbirds, and nearly 3 million during migration. General numbers of these species during the period of molting can reach about 30,000 – 50,000 birds. There is a group of especially protected nesting species – Dalmatian Pelican – 250 pairs, Glossy Ibis – up to 350 pairs, Little Egret – 150 pairs, Squacco Heron – 10 pairs, White-headed Duck – up to 20 pairs, and Great Black-headed Gull – up to 250 pairs.