Currently, three ways of captive breeding are developed: the hand-rearing, the costume-rearing, and parent-rearing techniques. 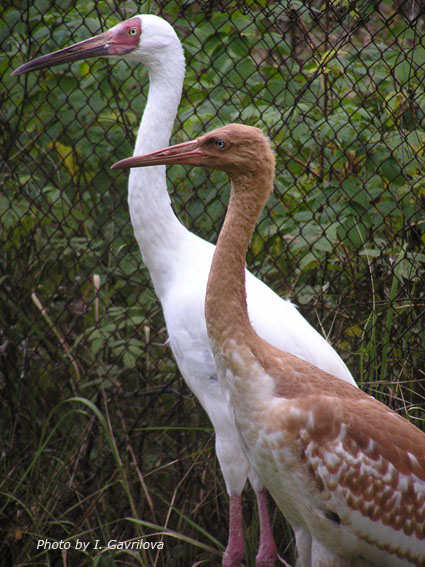 Since the first chicks were born from eggs taken from nature or other breeding centers, only the hand-rearing technique was used at first. Due to the chicks’ inherent aggression, these first youngsters were raised separately from one another in special “chick only” facilities until they reached the age of one to one-and-a-half months. These birds were completely isolated from their parents and other adult cranes.

The technique of isolated-rearing (costume-rearing) was developed at ICF in 1985 and is now applied worldwide to rearing cranes in captivity so that they are imprinted on their own species and, at the same time, are fearful of humans, hence suitable for release.  From the moment of birth the chicks were isolated so that they did not see any humans and did not hear their voices. People who approached these chicks wore white costumes, which would hide the shape of a person and their face. For feeding, at first, some home-made puppets of the Siberian Crane head and neck were used, but from 2001, an anatomically correct puppet of the Siberian Crane head is being used. This puppet was made by a professional Japanese artist by name of Kharuo Uchiama. For audio contact, they use portable players with the recorded voices of real adult birds.

The only natural is the parent-rearing technique. This way of breeding helps the chicks grow up into real wild birds, imprinted on their own species, and also they grow up healthier and stronger. The draw-back of this method is the limited number of Siberian Crane pairs breeding in the Center, and, consequently, a small number of chicks being born that way. A growing number of breeding pairs can be reached by using surrogate parents – which are cranes of other species.  During nesting and incubation, cranes react calmly to their eggs being replaced by other eggs and they will raise the chicks which will hatch just as willingly, as though they were their own.  This method was first used in 1999. This technique is adequate, however, if the previous imprinting on wrong species is corrected in the stage of learning flight using the birds of the same species. Last researches show one more disadvantage of parent-rearing – release birds have no experience to find food in the nature, as they were fed artificially during raising along with their parents.

Thius, through photoperiod manipulation to artificially create in captivity the long periods of light to which wild cranes are exposed in the Arctic spring, and through artificial insemination and improved husbandry practices, the captive population has grown to about 200 birds.

Now flourishing colonies of captive Siberian Cranes there are at the Oka Crane Breeding Center (OCBC) in the Oka Nature Reserve in Russia, in the International Crane Foundation in the United States, and in Cracid Breeding and Conservation Centre in Belgium. Some breeding pairs are kept in few zoos and breeding centers in Russia, China and some European zoos.

OCBC is responsible for keeping of International Siberian Crane Studbook (ISCS). Two first issues of ISCS (1984 and 1996) were prepared by late Vladimir Panchenko, former Director of OCBC. The third issue of ISCS (2001) was dedicated to his memory. This and two following issues were prepared by OCBC and CBCC. The 4th  issue (2006) included information on 326 captive Siberian  Cranes (129 males, 127 females and 70 others) held by 40 agencies in 10 countries).