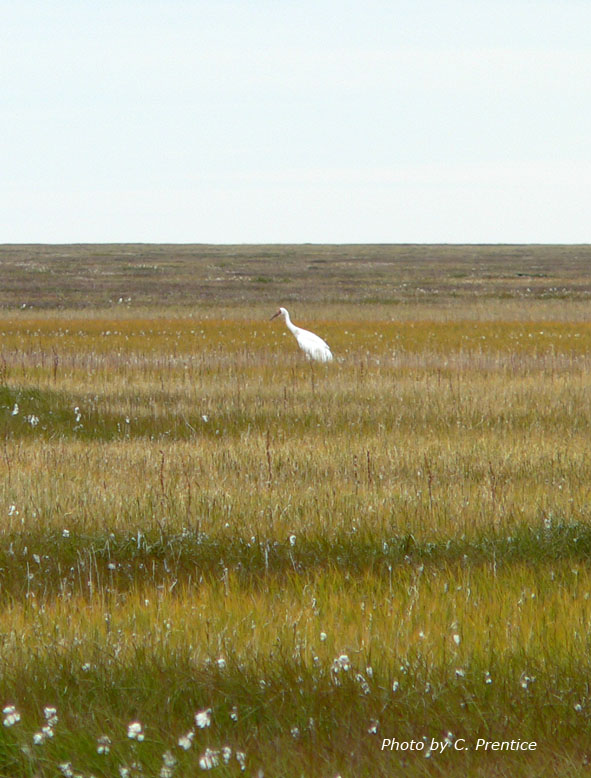 The main breeding grounds cover 82,000 km2 in the Yakutia region of northeastern Siberia, south of the East Siberian Sea between the Yana and Kolyma Rivers. Kytalyk Republic Resource Reserve is a site of breeding grounds with the highest Siberian Crane densities.

The famous Yakutian ornithologist K. Vorobiov was the first who discovered Siberian Crane breeding sites on the tundra in 1960. The first two nests of this mysterious species were found in 1961 by Yakutian researcher Vladimir Perfiliev, during a crossing of the tundra between the Kolyma and Indigirka Rivers. Since that time several aerial and ground surveys wereconducted by Yakutian ornithologists and All-Russian Research Institute for Nature Protection (ARRINP) staff to determine distribution, number, breeding ecology, feeding, behavior and so on.

Since the early 1990s, the Institute for Biological Problems of the Cryolithozone (IBPC) in Yakutia has conducted monitoring at the Siberian Crane breeding grounds. Today the monitoring system includes model sites with different environmental conditions and conservation regulations in the breeding grounds at Kytalyk Republic Resource Reserve (RRR), and during intensive migration (Khonnu locality in the Upper Indigirka River, Middle Aldan basin: Kuoluma-Chappanda, Kyupsky and Chabda RRs).

By 2006, within the main study area in Kytalyk RR, the individual sites of 102 crane pairs were found within an area totaling 7,884 km2. In 2008, 11 and 5 new pairs of the Siberian Crane were discovered in model sites #41 and #42, respectively. The breeding success of the population broadly varies (from 6 to 70%) and depends on the climatic conditions during the beginning of egg-laying (late May-early June).

An expedition in 2009 reported 140 Siberian Cranes along 520 km transect across of Ust-Yana region near the Laptev Sea coast, west of the core breeding area in Kytalyk RRR. Result of the expedition indicated that the number of Siberian Cranes in this area has increased since the 1980 aerial surveyconducted to determine the species distribution. Besides new Siberian Crane breeding habitats were discovered in coastal zone of Laptev Sea.

Non-breeding individuals range widely, and have occasionally been observed during the breeding season in the Russia-Mongolia-China border region, along the Onon, Uldza, and Khalkhin Gol Rivers, and in upper reaches of the Tuul River. 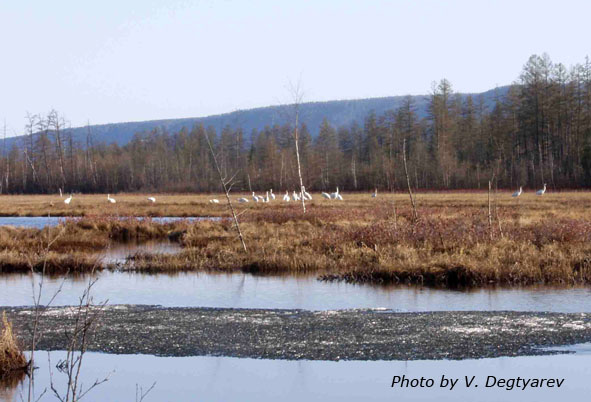 Siberian Cranes start autumn migration in the middle of August. Non-breeding birds are the first to migrate. The last cranes depart the breeding grounds in early October, thus the period of departure can be one and half months.

The main migration route of the Siberian Crane nesting between Kolyma and Indigirka Rivers goes along Indigirka and Aldan River Valleys in Yakutia. Observation points along flyways for the monitoring of Siberian Cranes migration were set up in three regions: Indigirka Basin in northeastern Yakutia; Okhotsky Perevoz Village in Lower Aldan River in southeast Yakutia; and Kyupski, Chabda and Kuoluma-Chappanda RRRs in Middle Aldan Basin in southern Yakutia.

While it has been known for some years that Siberian Cranes pass through southern Yakutia on their way to China, until recent investigations, there was only limited information about staging areas along the major river valleys. An inventory of these flyway sites has been conducted by IBPC staff since 2004. The investigated area covers large expanses of taiga forest and important floodplain habitats, including oxbow lakes, Mari peat-moss bog complexes,Alas meadows and emergent wetlands.

In the Indigirka basin the most suitable Siberian Crane stopover sites are located in Momskiy Ulus (district) along the Indigirka, Inyali and MomaRivers and near large lakes of Sobolokh and Ulakhan Kel which provide safe places for roosting. Extensive information has been collected on the sightings of Siberian Cranes in the area of Kubalakh. Between 50 and 300 birds have staged there in different years. The maximum number of staging cranes (1,500 individuals) was registered at Khiltaakh Riverin 2000. Flying across the Chersky Mountain Range, cranes rise to a height of over 2,700 m. Perhaps, the Momsky Ulus is the place where they can rest after and before their long passages.

In the Lower Aldan Basin, according to information from local people, Siberian Cranes stop over on the left bank of the Lower Aldan River at Khorogor-Mas and Krestyakh sites as well as at Kamyshevoye and Khochuta Lakes.

During recent years, Siberian Cranes have been stopping more often in the Amur Region near the border between Russia and China, especially during spring migration.

Thanks to support from ICF and SCWP, the Administrative Bureau of these national nature reserves, the Northeast Forestry University, Jilin Forestry Academy, and Hebei Cangzhou Normal Universityhave conducted regular monitoring of Siberian Crane migration stopovers in Songnen Plain. Areas surveyed included Zhalong, Xianghai, Keerqin, Tumuji and Momoge NNRs. Area to the south in Liaoning Province included Wolong Lake, Huanzidong, and Panjin. Then along the coast of Bohai Bay (Bo Sea) surveyed sites included Qinhuangdao, Tianjin, and the Yellow River Delta. These observations indicate that since 2004 the number of Siberian Cranes at Momoge NNR has increased with a maximum of 2,300 Siberian Cranes registered in spring 2009. In the present time Momoge RRR is an important stopover site for migratory Siberian Cranes during migrations both in autumn and spring.

The recently discovered Huanzidong Reservoir in Liaoning Province, where up to thousand Siberian Cranes stop over 2-3 weeks, is also important migration stopover, but still an unprotected site.

Siberian Cranes continue to use migration stopovers in Zhalong, Xianghai and Keerqin NNRs, as well as other wetlands along their flyway, such as Yingguang wetlands. They have also been observed at Beidaihei in Hebei Province and Yellow River Delta NNR in Shandong Province. However cranes are not numerous at these sites.

Vagrant individuals are occasionally reported in Japan, usually in the autumn.

The Eastern Asian population winters in a limited number of wetlands along the middle and lower reaches of the Yangtze River in south-central China. The primary wintering grounds are located in Jiangxi Province at Poyang Lake (which supports more than 95% of the global population). Small wintering numbers have been recorded at Dongting Lake in Hunan Province, and a few birds at Shengjin Lake in Anhui Province, at Heigangkou in Henan Province, and Hubei Province.

The wintering grounds of the Siberian Cranes at China’s Poyang Lake were discovered rather recently, in 1980, by Zhou Fuzhang and Ding Wenning. The number of Siberian Cranes known to winter at Poyang Lake Nature Reserve remained in the general order of 2,500 birds during the years 1988–1997 (other than in 1993, when many cranes wintered outside Poyang Lake Nature Reserve). Since that time, numbers of Siberian Cranes within Poyang Lake NNR have changed dramatically, most likely due to water level fluctuations, Vallisneria distribution and changes in use patterns of the birds: in winter 1998/1999, only 741 birds were recorded inside the reserve, although near 1,400 were found in other parts of the Poyang Lake system, and an aerial census in early 1999 located only 2,004 throughout the Poyang Lake Basin.

The Siberian Crane was reported to be a common winter visitor in Japan during the seventeenth to nineteenth centuries, but it is now a rare and irregular winter visitor and spring migrant as well as on the Korea Peninsula.