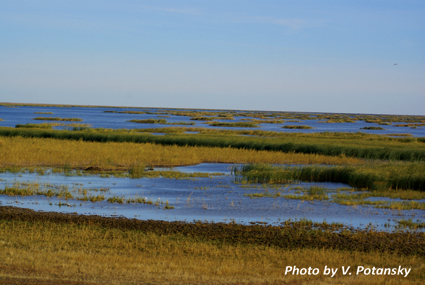 Overview. The lake system is comprised of natural water reservoirs located on the northern Ubagan slope of the Turgay Depression within the the larger Koibagar-Tyuntyugur Lake group in Northern Kazakhstan. These fresh water lakes are characterized by seasonal changes in water levels caused by flooding cycles, which is typical for steppe zone.

Importance for the Siberian Crane. The site was an important migration stop-over area for the Siberian Crane along its western and central flyways. Some lakes of the group, having shallower depths and partly open shores, are quite suitable for Siberian Cranes as places to rest and feeding. As a result of a questionnaire, two sightings have been identified for the last 10 years: two adult birds in September 1992 on Biesoigan Lake (Bragin 2008) and two birds in April 2006 at Alabota Lake, of the Koibagar-Tyuntyugur Lake System (Bragin 2007).

Importance for other waterbirds. When the lakes are filled with water Eurasian Cranes nest at Zhanshura Lake. Groups of non-breeding Eurasian Cranes (up to 40-50 birds) have been recorded at Tyuntyugur Lake in the summer. During autumn migration the lake serves as a stop-over for migratory Eurasian Cranes (in 2002-2003 there were 400-500 birds).
During migration the site supports nearly 100,000 waterbirds. During spring migration tens of thousands of sandpipers stop over on the shores of Tyuntyugur Lake. In the years with favorable ecological conditions Tyuntyugur and Zhanshura Lake support some globally threatened species, such as Lesser White-fronted Geese and Red-breasted Geese. In some years the number of Whooper Swans and some other waterbird species exceeds 1% of the regional populations.