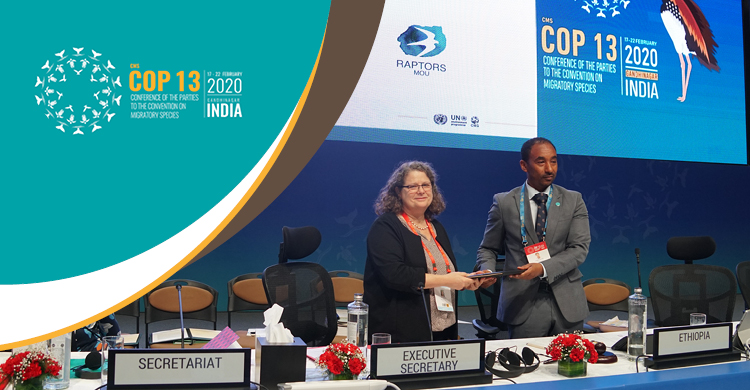 Gandhinagar, 19 February 2020 - Ethiopia has today signed the Convention on Migratory Species (CMS) Memorandum of Understanding on the Conservation of Migratory Birds of Prey in Africa and Eurasia (Raptors MOU) at the 13th Meeting of the Conference of Parties to CMS (CMS COP13) in Gandhinagar, India. Mr Kumara Wakjira, Director General of the Ethiopian Wildlife Conservation Authority signed the Raptors MOU on behalf of the Ethiopian Government. This brings the total number of Signatories to the Raptors MOU to 61.
Mr. Wakjira said “Ethiopia is rich in avifauna diversity, and hence identified about 73 Important Bird Areas for conservation priority. The country is also a staging post for migratory birds, including raptors. Most species are coming from Europe and Asia for wintering. Nonetheless, due to growing habitat threats, the distribution and status of raptor species is declining. Ethiopia is, thus, pleased to sign the Raptors MOU to strengthen the protection of raptors.”
“By signing the Raptors MOU today, Ethiopia has demonstrated its strong commitment to conserving migratory birds of prey in Africa and Eurasia. The Raptors MOU has been in effect since November 2008 and has played a critical role in elevating the plight of migratory birds of prey onto the international political agenda. The Raptors MOU covers 93 species of migratory birds of prey and extends over 130 Range States” said Mr. Lyle Glowka, Executive Coordinator of CMS Office – Abu Dhabi.
Ethiopia is a strategically important country for the conservation of migratory birds of prey given its location across the East African flyway, a significant migration route for millions of birds of prey. Out of the 93 species covered in the Raptors MOU, 40 species occur in Ethiopia, including the Steppe Eagle (Aquila nipalensis), the Saker Falcon (Falco cherrug) and the Egyptian Vulture (Neophron percnopterus) which are classified as “Endangered” on the IUCN Red List. Conservation actions undertaken in Ethiopia can, therefore, offer profound benefits to almost half of the species listed on the Raptors MOU.
Ethiopia became a Party to CMS in January 2010 and acceded to the Agreement on the Conservation of African-Eurasian Migratory Waterbirds (AEWA) in February 2010.
The Coordinating Unit of the Raptors MOU warmly welcomes Ethiopia and anticipates a strong collaboration in years to come. The CMS Raptors MOU will enter into effect for Ethiopia on 1st March 2020.
Mr. Kumara Wakjira, Director General of the Ethiopian Wildlife Conservation Authority on signing the CMS Raptors MOU