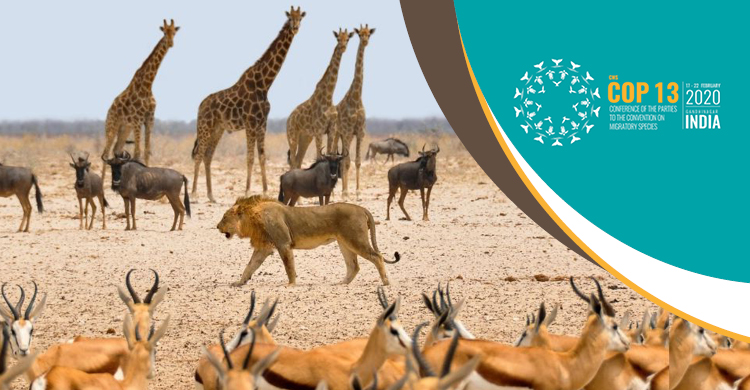 Gandhinagar, 16 February 2020 - Outcomes from a High-level Segment taking place on the eve of CMS COP13 will help to ensure that migratory species are prioritized in a new 10-year UN global biodiversity framework.
CMS COP13 will kick off the ‘super year’ for biodiversity, which will culminate in the adoption of the new framework during the UN Biodiversity Conference in October.
The High-Level Segment will take place in Gandhinagar ahead of CMS COP13. It will feature a special dialogue on CMS priorities for the post-2020 global biodiversity framework and engage ministers and senior officials of governments, executives of international organizations and other biodiversity leaders.
Key messages from the High-Level dialogue will be incorporated into the Gandhinagar Declaration, which will be proposed by the Government of India for adoption during CMS COP13.
The Resolution will be formally transmitted to the second meeting of the Open-ended Working Group on the Post-2020 Global Biodiversity Framework (OEWG) in Rome, Italy on 24-29 February 2020, and to the UN Biodiversity Conference in October.
The concept of ‘ecological connectivity’ is the top CMS priority for the Framework, which calls for the protection and restoration of important geographical areas that together support migratory species during their natural lifecycles, such as breeding and feeding.
Two key, related priorities for CMS are that the post-2020 framework includes a commitment by governments to cooperate where necessary to address biodiversity loss including species declines.  International cooperation is at the heart of the Convention on Migratory Species, as migratory species protected under CMS cross political borders, often travelling long distances during their natural migration cycles.
The High-Level Segment will be held on Sunday 16 February from 14:00 to 18:00 hrs in Seminar Hall 4, Mahatma Mandir Convention Centre.  Following opening remarks from Mr. Prakash Javadekar, Minister of Environment, Forest and Climate Change of India and Ms. Amy Fraenkel, Executive Secretary of CMS, there will follow two consecutive sessions. The first will be dedicated to Ministers and other high-level government officials, while the second will engage executives of international organizations.
The discussion will be conducted in an open roundtable format, to encourage the speakers to engage in an interactive discussion. The event is open to all CMS COP13 participants.