Greater Protection to Be Granted to Endangered Migratory Animals 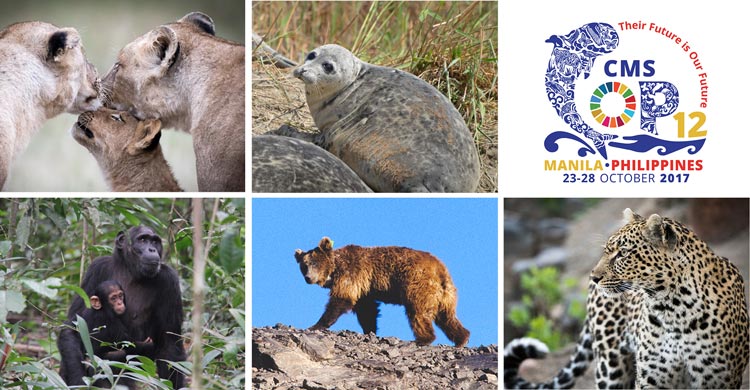 Manila,  26 October 2017 - Representatives of governments attending the year’s foremost wildlife summit have today taken a major step towards agreeing to strengthen measures for the conservation of a wide range of migratory species.

The Conference of the Parties has today given the green light to add a number of endangered animals to the two Appendices of the Convention.  Listing on Appendix I requires governments of Parties to protect the species while Appendix II calls for international cooperation to ensure that the conservation status of a species is favourable.

The mammals that will benefit from the additional protection afforded by the Convention, include some familiar names as well as some less well-known ones:

Unusually for CMS, votes were necessary on the proposals regarding the Lion, the Leopard, the Giraffe and the Chimpanzee as it proved imposible for Parties to reach consensus.  All four proposals were carried by large majorities.

Other mammals in line for greater protection are the African Wild Ass, Przewalski’s Horse, the Giraffe and four species of Lasiurus Bat.  The proposal to add the Chinkara (Indian Gazelle) was withdrawn

A number of avian species have also been approved for addition to the CMS Appendices. These are the Christmas Frigatebird, a subspecies of the Black Noddy, the Steppe Eagle, the Lappet-faced Vulture as well as nine other species of vulture occurring in Africa and Asia, the Yellow Bunting and the Lesser and Great Grey Shrike.

COP11 in Quito in 2014 was dubbed the “Sharks Conference” as Parties agreed to list a number of sawfish and mobular rays to the Appendices.  COP12 has agreed to additional protection to further species of fish – listing the Whale Shark already included on Appendix II on Appendix I and adding the Dusky Shark, the Blue Shark, the Angelshark, the Common Guitarfish and the White-spotted Wedgefish to Appendix II.

In all a total of 35 species were proposed for inclusion on the CMS Appendices in submissions made by 24 Parties from Asia, Africa, the Americas, Europe and Oceania.  The proposals had all been examined by the Sessional Committee of the CMS Scientific Council at its meeting in July 2017.  Approval today at the Committee of the Whole clears the way for the proposals' formal adoption by the Conference Plenary session on Friday.  The changes will take effect 90 days after the close of the Conference.