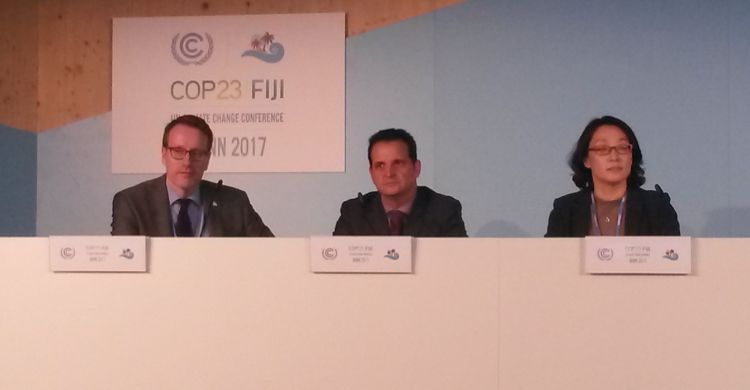 Bonn, 8 November 2017 –barely a week after the CMS COP in Manila, tens of thousands of national delegates and other participants are converging on Bonn for the 23rd Conference of the Parties to the UN Framework Convention on Climate Change.  The CMS Family has already been active in the margins of the Conference, with the Common Wadden Sea Secretariat (CWSS) hosting a side event yesterday on climate change adaptation and mitigation.

The audience heard presentations from Mr. Donovan Burton, of Climate Planning, Australia, who highlighted the economic risks of climate change arising from the threats to human settlements along the coast, from Ms Suk-Hui Lee of the Korea Marine Environment Management Corporation (KOEM) and Mr. Heung-Sik Park of the Korea Institute of Ocean Science and Technology (KIOST) on the Korean Blue Carbon approach and its application in salt marsh management and restoration and from Mr. Jacobus Hofstede, of the Ministry for Energy Transition, Agriculture, Environment, Nature and Digitalization of the Federal State of Schleswig-Holstein on the climate change adaptation strategy for the Schleswig-Holstein Wadden Sea.

The event was moderated by CWSS Executive Secretary, Rüdiger Strempel, who stressed that coastal habitats across the globe were facing similar threats and much could be learned from the experiences pf others.  The Wadden Sea World Heritage was already cooperating closely with the authorities of the Banc d’Arguin in Mauretania, another key site on the East Atlantic Flyway, as well as with the Republic of Korea.

The CWSS oversees a 500km stretch of the North Sea coast shared by the Netherlands, Germany and Denmark covering an area of some 10,000 km2.  With its rich fauna and flora – over 10,000 species, 200 of which are endemic and hosting over 12,000,000 birds which use the mudflats as a stopover on their migrations along the East Atlantic Flyway -  the Wadden Sea is a World Heritage Site.  The Dutch and German parts of the Wadden Sea were designated in 2009 and the Danish was added in 2014.  The CWSS also administers the Wadden Sea Seal Agreement, the first regional instrument concluded under the auspices of CMS.