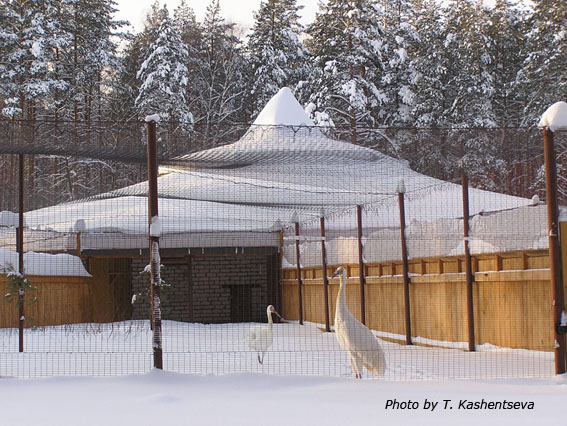 The initiative to create such a center on the territory of the former USSR belongs to George Archibald and Ronald Sauey – the founders of the International Crane Foundation. In 1974 they addressed the leading ornithologist Dr. Vladimir Flint with a proposition of a joint venture in reestablishing the population of the Siberian Crane, and in 1976 a Congress between the Russian and American specialists was held in Moscow. This Congress marked the beginning of the “Siberian Crane” Project which was started under the umbrella of the Soviet-American Agreement of Collaboration in the field of nature preservation, which was signed in 1972.

The first stage of the project consisted of creating a genetic pool of the Siberian Crane in captivity. In the zoos of the world there were very few cranes at the time, and those that were there did not breed. There were no Siberian Cranes at all in the zoos of the Soviet Union. It was decided that a Breeding Center be organized on the territory of an already existing nature reserve – one that was not too far from Moscow and one that had enough potential to sustain such an enterprise. The Oka Reserve in the Ryazan Region was chosen. Ornithologist Dr. Vladimir Panchenko was appointed first Head of the Oka Crane Breeding Center (OCBC).

In 1978, the first breeding facilities were built by the employees of the Reserve. The buildings of a former camping facility were converted into cranes’ living quarters. Later, in 1980, a new crane breeding facility with 10 indoor and outdoor pens was built, and by 1984 – a separate facility for raising chicks and the first hexagonal complex of 12 indoor and outdoor pens.  The latter is now used as a demonstration pen where different species of cranes are presented for the benefit of visitors and tourists. In 1988-1989 two more hexagonal pens were built several kilometers away from the Breeding Center. The International Crane Foundation (ICF), the Bird Park Walsrode (Germany) and the Cracid & Crane Breeding and Conservation Centre (Belgium) provided substantial assistance to the Oka Reserve Crane Breeding Center including equipment, instruments and medicine.

Science expeditions sponsored by the All-Russia Research Institute for Nature Protection and Preserves in 1977-1978 collected 12 eggs of Siberian Crane of the Eastern population and sent them to the International Crane Foundation. In 1979 17 more eggs were transported from Yakutia to the OCBC and the Bird Park Walsrode in Germany.  Such was the beginning of the first population of Siberian Crane in captivity.

In 1979 a one-year-old Siberian Crane was brought to the Breeding Center. This bird was rescued by Ms. T.P. Soldatova in the neighborhood of the village of Gorky of the Shurykarsky District of the Yamalo-Nenetsky Autonomous District, when it was only a downy chick. He was named Sovi. In 1982 and 1987 more two adult wounded Siberian Cranes were brought over from Yakutia.

As of January 1 2011 there were 25 adult Siberian Cranes (13 males and 12 females) in the Oka Reserve Breeding Center.

In the Cracid & Crane Breeding and Conservation Center (CBCC) in Belgium, a large number of cracids and other birds of the neotropical forest are kept, together with almost all species of cranes, birds of wetlands and savannah. 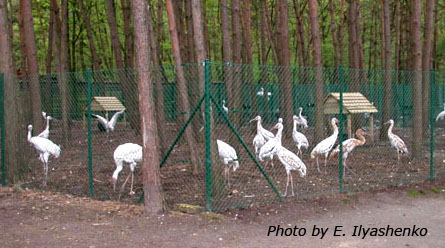 Besides the coordination and funding of other conservation projects of Crax International, the center is responsible for the training of biologists, bird keepers and other persons working in the projects in the country of origin of the birds.

Above this, an important task of the CBCC is to develop artificial reproduction techniques and extend their applications in order to guarantee the genetic diversity in small populations of endangered birds like the Siberian Crane and the White-winged Guan, species which almost disappeared from their natural habitat.

Several people from the Oka Crane Breeding Center, Russia, and from Pakistan already had the opportunity to visit CBCC and to learn more about their management, husbandry and breeding of cranes.

Besides the yearly structural support for already many years and recently the funding of the reconstruction of breeding facilities at the OCBC, CBCC is supporting (practical and financial) Crane Conservation Projects all over the world.