The Western/Central Asian Site Network for Siberian Cranes and Other Waterbirds (WCASN) was formally launched on 18 May 2007, in a special signing ceremony held during the Sixth Meeting of the Signatories to the Memorandum of Understanding on Conservation Measures for the Siberian Crane, in Kazakhstan.

The WCASN focuses conservation efforts on sites of international importance for the Siberian Crane along its West and Central Asian flyways. To date sites have been designated in Afghanistan, Azerbaijan, India, Islamic Republic of Iran, Kazakhstan, Pakistan, Russian Federation (western Siberia), Turkmenistan and Uzbekistan.

The WCASN goal is to ensure the long-term conservation of the Siberian Crane and other migratory waterbirds along the Western and Central Asian Flyways through recognition and appropriate management of a network of internationally important sites. The long term goal for the WCASN is to be part of the larger Central Asian Flyway (CAF) initiative to establish a site newtork to protect all migratory waterbirds in this region.

Guidelines for the preparation of site nomination documents

Ten sites from five countries (India, Iran, Kazakhstan, Turkmenistan and Uzbekistan) were formally accepted into the WCASN at the launch ceremony in Kazakhstan on 18 May 2007. The sites were nominated by national representativesof each of the countries. Certificates were presented at the launch by Mr. Khairbek Mussabaeyev, Deputy Chairman, Forest and Hunting Committee of the Ministry of Agriculture, Republic of Kazakhstan, and by Mr. Douglas Hykle, Senior Advisor of the Secretariat of the Convention on Migratory Species (CMS).

Two sites from Pakistan were designated for including in the WCASN at the lunch ceremony in Germany on 8 June 2010. Certificates were handed to national representative from Pakistanby Mrs. Elizabeth Mrema, Executive Secretary of CMS.

The Seventh Meeting of the Signatories to the Memorandum of Understanding concerning Conservation Measures for the Siberian Crane was held in Bonn, Germany, 10-12 June 2010.

The Sixth Meeting of the Signatories to the Memorandum of Understanding concerning Conservation Measures for the Siberian Crane was held in Almaty, Kazakhstan, 15-19 May 2007. 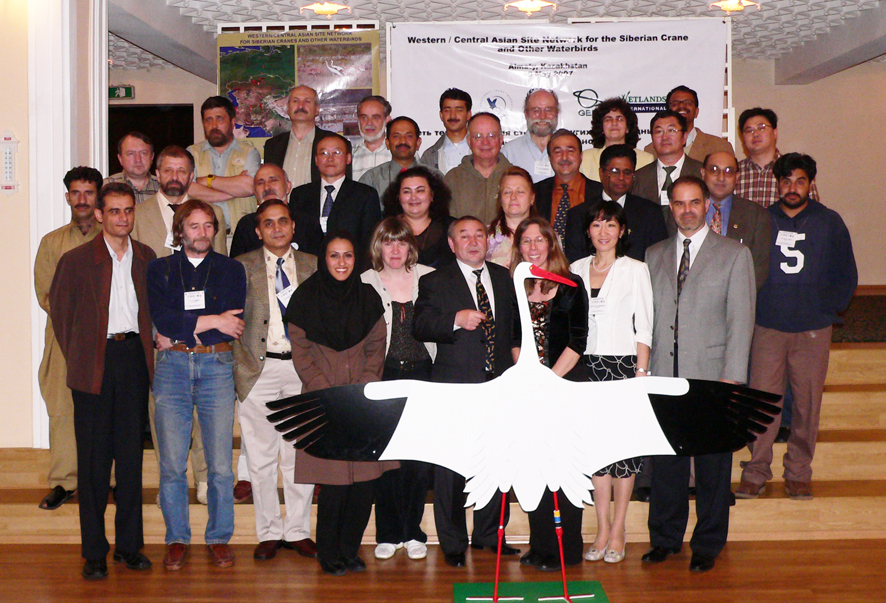 Meeting to Endorse the Proposed Western/Central Asian Site Network for the Siberian Crane and Other Waterbirds, New Delhi, India 13 June 2005.

The Fifth Meeting of the Signatories to the Memorandum of Understanding concerning Conservation Measures for the Siberian Crane, Moscow, Russia, 26-29 April 2004

The population of Siberian Cranes migrating along the Eastern flyway is covered by the Flyway Site Network under the East Asian-Australasian Flyway Partnership (EAAFP):
http://www.eaaflyway.net/flyway-site-network.php