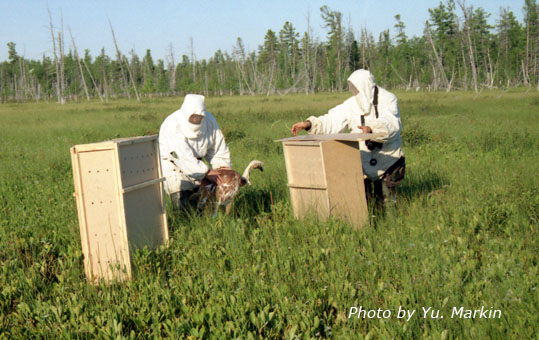 From 1991 to 2010, 139 Siberian Cranes that originated from captive-produced eggs have been released into the wild on the breeding and wintering grounds and at migration areas. Siberian Crane chicks were aroused both isolated rearing technique as well as by parents. Totally there were 160 releases of 139 birds, as some cranes were released two or three times. 108 of 139 released Siberian Cranes started migration.

None of these cranes was observed on the known wintering grounds. In subsequent years, there have been reports about sightings of banded cranes at the Siberian Crane migration stopovers and some unconfirmed reports of individuals at migration staging areas several hundred kilometers from the area where they were released. The vast and inaccessible nature of the Siberian wilderness, the low numbers of humans, and the financial costs to survey wide areas and satellite tracking providing make it difficult to evaluate the success of the release experiments.

These results indicate that further discussion and review are needed to improve release techniques and more effective use of PTTs is required to track released birds.

The reintroduction of Siberian Cranes is unlikely to succeed until factors (such as hunting) that led to the demise of the original flocks are addressed. Efforts to reduce those threats are now underway in all Range states, thanks to ongoing work under the CMS MoU for Siberian Cranes.

To 2010, 50 isolated-reared and parent-reared juveniles have been transferred from Oka Crane Breeding Center to the breeding grounds of the wild Siberian Cranes. Some of these birds were released in late summer with wild Siberian Cranes on the Kunovat River Basin. 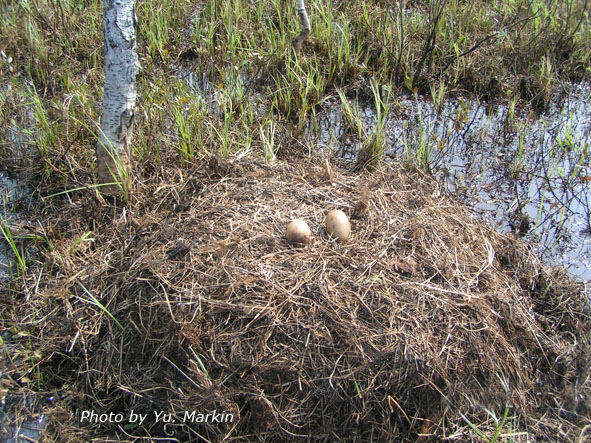 For the period from 1991 to 2010, 39 eggs were placed in Eurasian Crane nests in the Kunovat Wildlife Refuge and in Konda & Alymka Interfluves, for cross-fostering. There were two reliable cases of hatching of Siberian Crane chicks in Eurasian Cranes nests and their migration. 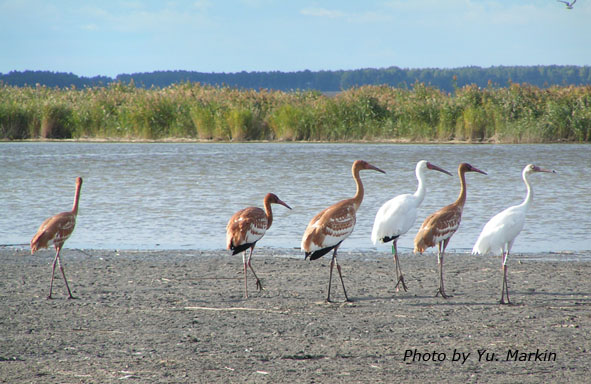 To 2010, 21, all parent-reared, Siberian Crane juveniles and one-year old birds were released in Astrakhan Nature Reserve in Volga Delta. This site is an important migratory stopover of Siberian Cranes of Western Asian flock. Despite of time of release didn’t concur with time of wild Siberian Crane stop there; all released cranes started autumn migration along with other waterbirds. 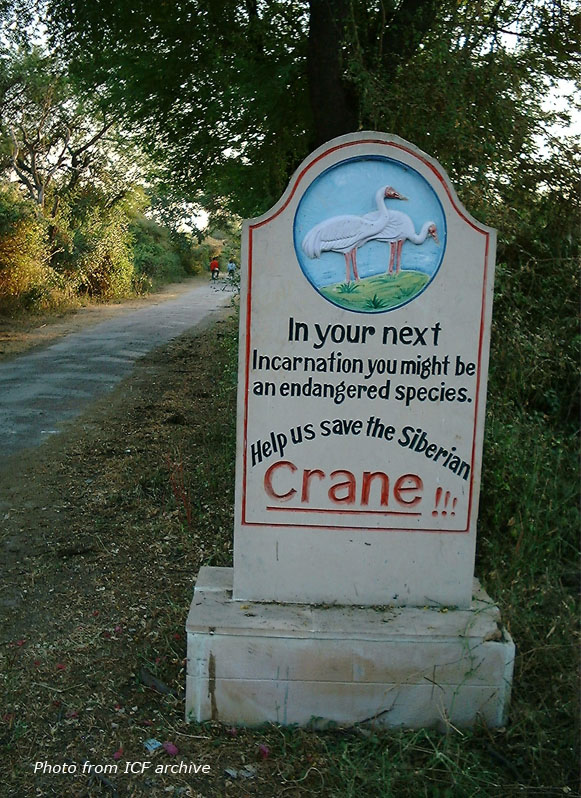 Efforts were made to transfuse captive-produced birds into the flocks of wild cranes on wintering grounds in Iranand in India. Most of these cranes failed to migrate and those that did were not seen again.

The surviving cranes were non-migratory and they did not breed. Over a period of several years, one by one they disappeared for a variety of known and unknown factors. The experiment confirmed that captive-reared cranes could survive in the wild throughout the year at KNP, but it is unlikely that they can breed at such southern latitudes. 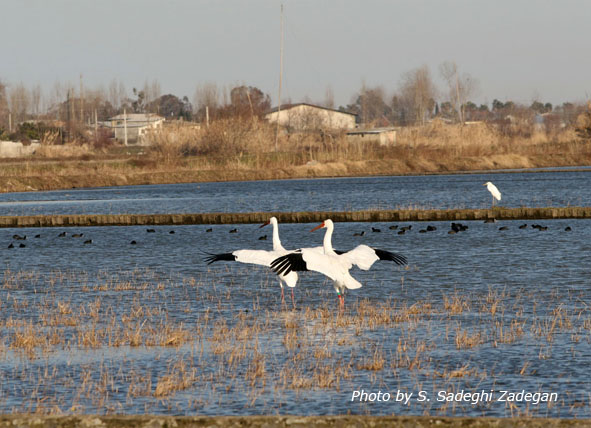 In Iran two adult parent-reared males, transferred from ICF, were released in winter 1996/97 in wintering ground in Fereydoonkenar to wild Siberian Cranes for the first time. The captive-reared cranes did not join the wild cranes and did not migrate. One of them was recaptured and held at Pardisan Eco-park,Tehran, and died in captivity in 2006. Release was resumed in winter 2002/03. Since that time almost every year parent-reared and isolated-reared Siberian Cranes transferred from OCBC were released.

In summary, a total of 11 captive-bred (isolated-reared an parent-reared) Siberian Cranes have been released at Fereydoonkenar inIranthe winter of 1996/1997; three of them died and eight started migration along with wild cranes. All cranes were ringed with colour plastic bands and three of them were also fitted with satellite transmitters. Unfortunately, all the transmitters stopped working after a short time or just after migration started. None of the released Siberian Cranes returned to the wintering grounds. Only one Siberian Crane released in Iran in winter 2007/08 was sighted the following spring 2008 at breeding grounds in Khanty-Mansisk Autonomous Region, West Siberia, Russia. 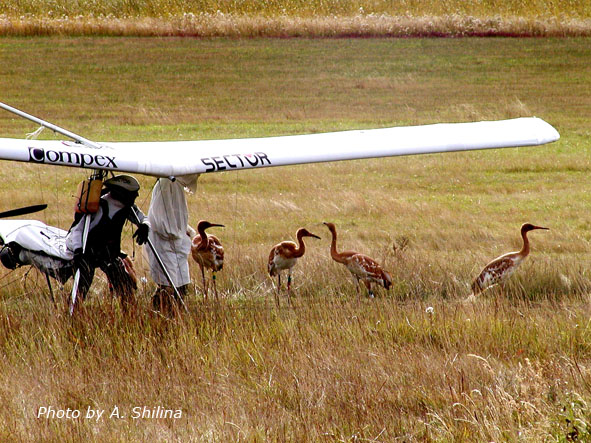 In the United States, costume-reared Sandhill and Whooping Cranes have been trained to follow a slow-flying ultra-light aircraft piloted by a crane-costumed human (seehttp://www.operationmigration.org/). The cranes are flown in wide circles around the vicinity of the release area for several weeks before migrating in a step-by-step flight south across theUnited States. The cranes spend the winter in a protected and isolated area where there is no contact with non-costumed humans. In late winter / early spring they migrate back to the vicinity of the release areas in the north. Their behavior is similar to that of the wild cranes. After eight successful years of assisted one-way migration south along the route, there is considerable hope that this method will become the standard applied method to reintroduce birds in flyways where they have become extinct.

Since 2002, the “Flight of Hope” ultra-light project was initiated in Russia. In the preliminary phase of this project, a hang-glider technique was used to try to teach the migration route to six Siberian Cranes. It was shown that the Siberian Cranes could be trained to follow a hang-glider to energetically soar in thermals similar to wild migrating cranes. As a result of this experiment, four Siberian Cranes joined the fall migration of Eurasian Cranes. The second attempt to lead captive-bred Siberian Cranes with ultra-lights supported by Oil-Gas Company ITERA was undertaken in 2006, but birds were returned to OCBC.

There were two alternate wintering sites for Siberian Cranes inUzbekistanwere proposed: Jeiran Ecological Center (JEC) and Amudaria River Valley. JEC is located near Bukhara Town, north of the Amudaria River. This protected territory is occasionally used by Eurasian Cranes as a migratory stopover. In 2009 two Siberian Cranes were brought to the center from the OCBC to assess ability of wintering. They spent two years in JEC, but in 2011 were killed by predators. Amudarya River Valley is located near the town of Termez, on the border withAfghanistan, where the last join census conducted by Uzbekistanand Russian scientist indicated up to 30 thousand Eurasian Cranes.