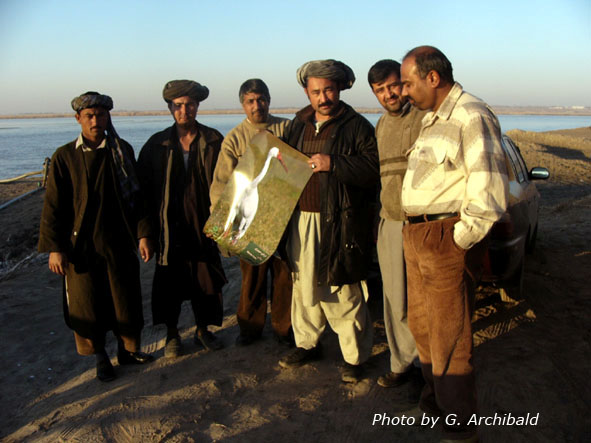 Any conservation efforts are futile without changing human behavior and improving understanding about the importance of crane conservation and wetlands protection. To increase public awareness, the Siberian Crane Range States have conducted various education programmes, involving government officials, scientists, conservation managers, hunters, teachers, farmers, fishermen, schoolchildren, and the media in Siberian Crane conservation. Special training sessions and meetings have been organized to engage hunters, trappers, and other stakeholders in the reduction of threats to Siberian Cranes.

Many useful educational materials have been developed and widely shared. Through the kindness of Canadian artist, Robert Bateman, thousands of large, colorful prints of his painting of a Siberian Crane were produced in India and distributed throughout the range states; slogans in the 12 languages of the signatory states underscored the international scope of this effort. To share the story of the Siberian Cranes, ICF created a 25-minute video for television broadcasting, produced in the languages of the range states. Booklets, brochures, stickers, and buttons have also been used to draw attention to these magnificent birds.

In Yakutia, Russia, with support from Siberian Crane Wetlands Project (SCWP), summer ecological camps and seminars were held for schoolchildren and teaching staff, as well as training courses for the rangers and inspection service officers of the nature protection agencies. With support from SCWP, necessary equipment was purchased, and agreements were signed with municipal bodies relating to the maintenance of the specially protected natural territories (SPNT) and development of supplementary environmental education for schoolchildren.

Afghanistan and Pakistan are the countries where migrating cranes are most vulnerable, as hunting is legal there. Thanks to activity of the NGO ”Save the Environment of Afghanistan” excellent ecological educational activity among local people living near the Eurasian Crane wintering grounds has been conducted, including seminars and information materials sharing involving higher education institutions and community leaders.

In Pakistan the Northwest Frontier Province (NWFP) Wildlife Department and WWF-Pakistan (a non-governmental organization) have been actively involved in crane conservation. Key achievements of these organizations include establishment of a crane refuge in Lakki, promulgation of crane rules in NWFP, working with crane hunters and keepers on organizing crane conservation associations, educating school children through nature and crane club activities in schools, and applying other training and education activities. With limited funding, both of the organizations have plans to launch an integrated crane conservation program with other partners in the region.

In Iran, a public awareness programme is underway under Siberian Crane Wetlands Project, which is integrated with community participation work at the sites. A set of postage stamps depicting the Siberian Crane was issued in 2007 with support of the Department of Environment of the I.R.Iran, SCWP and WWF.

Seven of 11 Siberian Crane Range States are involved in Crane Celebration which has demonstrated that the charisma of this crane can successfully engage the private sector. This event was initiated by Crane Working Group of Eurasia in 2002 in Kazakhstan, Russian and Ukraine, and since that time number of involving sites are increasing significant up to 120 in 9 countries. In fact, activities like the crane celebrations have proven to be effective across the project.