The Central Asian flock of Siberian Cranes nested on the riparian lowlands of Kunovat River (tributary of Ob River) in Yamalo-Nenetsky Autonomous Region in north Western Siberia in Russia.

Until the late 1970s, there was only fragmentary and uncertain information on Siberian Crane breeding in northwest Siberia. The most frequently mentioned areas were 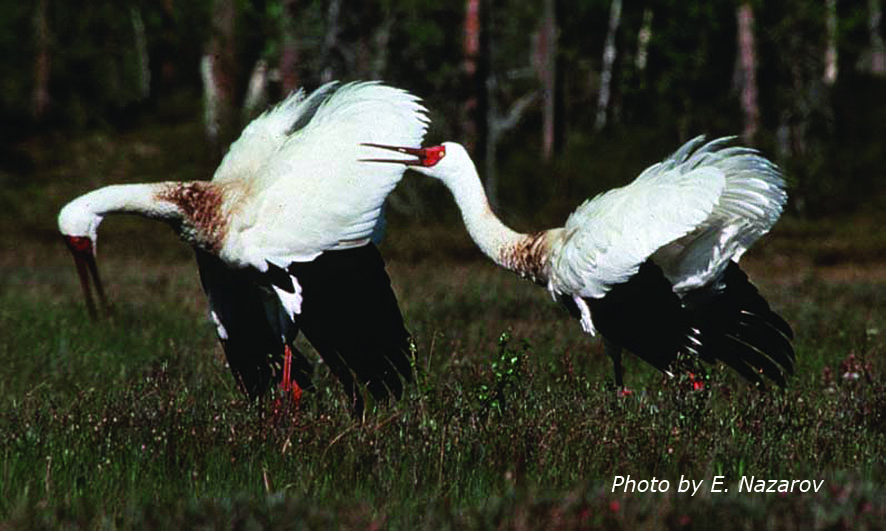 In 1978, an unfledged Siberian Crane chick was captured in the Dvuob’e flood plain. Locating the chick allowed researchers to focus the area for breeding grounds areas. In1981, A.G. Sorokin and Y.V. Kotyukov, under a joint expedition of ARRINP and Oka State Nature Biosphere Reserve (OSNBR) made a wide aerial survey in the Lower Dvuobie, and discovered the breeding grounds of the Central Asian Flock in West Siberia for the first time. Five breeding pairs were found nesting in the Kunovat River Basin along a tributary of the Ob River. Another three pairs were located to the north between the Kunovat and Pitlyar Rivers.

From 1981 to 2009 (excluding 2003, 2007, and 2008), regular aerial surveys were conducted in the Kunovat River Basin. The surveys show that number of breeding pairs in the Central Asian flock had been decreased. In 1987 the highest numbers of Siberian Cranes was observed: nine breeding pairs and one territorial pair.  From 1994 to 2001 only one breeding pair was regularly monitored. In 2002 only one bird of this pair was sighted in August. In 2003, for the first time since 1981 the known Siberian Crane pair was not found in Kunovat River Basin.

In spite of this fact, ARRINP and OSNBR staff continued to conduct aerial survey as well as to distribute questionnaires and to interview local people with support from the Sterkh Foundation, ICF and the UNEP/GEF SCWP (2003-2006). During period 2003-2008, 22 sightings of Siberian Cranes were mostly in spring and autumn, but 5 sightings were recorded in summer during breeding season.

The Western Asian flock breeds in a wilderness area of center Western Siberia, Russian Federation. The breeding area extends into the Khanty-Mansiysky Autonomous Region as well as Tyumen Region. The territory is vast, but the Siberian Crane is familiar to local people and it is a sacred bird for native Nentsy, Khanty and Mancy tribes. 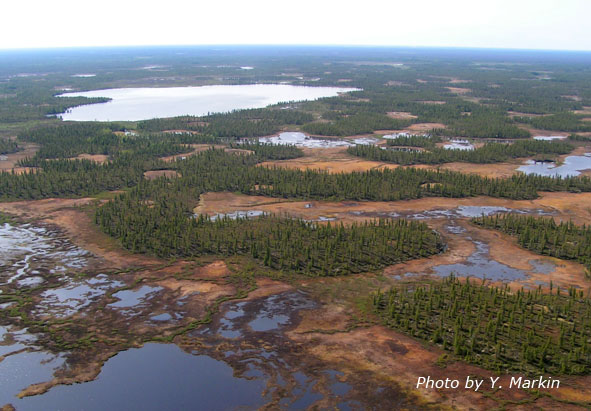 Breeding grounds of Western Asian flock of the Siberian Crane were only discovered in 1996, after Y.M. Markin with Iranian colleagues placed a satellite transmitter (Platform Terminal Transmitter or PTT) on a wild adult male Siberian Crane from a family group wintering in Iran. This PTT enabled researchers to follow the crane’s spring migration route, which ended on 23 May on a marsh in Konda and Alymka Interfluves in Upper Tyuma River along the west tributary of the Lower Irtysh River, 60 km west of the town of Uvat. During an aerial survey on 22 June 1996, the Siberian Crane pair was observed with a two-week-old chick. In early August 1997, this pair was located on the same breeding territory and had a two-month-old chick. Seven kilometers away, another pair with a chick of the same age was found. Over the last ten years, aerial surveys were conducted under support by the UNEP/GEF SCWP in 2002, 2004, and 2005, 2008, 2011.

In June 2005 during aerial survey nests were not found, but two single Siberian Cranes were seen separately on different days in the Uvat District in Konda and Alymka Interfluves. Distance between sighting points was less 10 km. The first cranes was in breeding plumage (feather stained), and it is possible that it was not alone. The second one was not seen well. In August 2008 and in June and September 2011, Siberian Cranes were not found at breeding grounds.

Information on Siberian Crane sightings has been collected from local people through a questionnaire and through interviews with local people. Target groups included hunters, fishermen, pilots, and other peopleconnected to and interested in nature. Special attention was given to obtaining accurate data. There were six sightings in Uvat District for the period 2005-2008, mostly in spring and autumn.

Monitoring along Central and Western Flyways 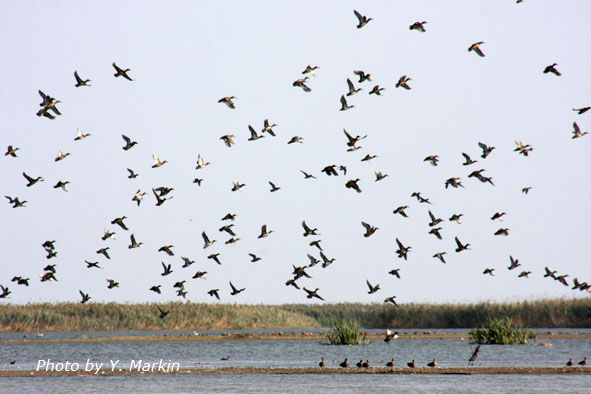 Siberian Cranes of the Western/Central Asian population use two flyways – western and central. Both the Western Asian and Central Asian flocks use same migration route from their breeding grounds in Russia to Kazakhstan, where they have long-term rest at migration stopovers in lake systems in Kazakhstan steppe.

After resting in Kazakhstan, Siberian Cranes continue their migration in one of two directions: along central flyway through Uzbekistan, Turkmenistan, Afghanistan, 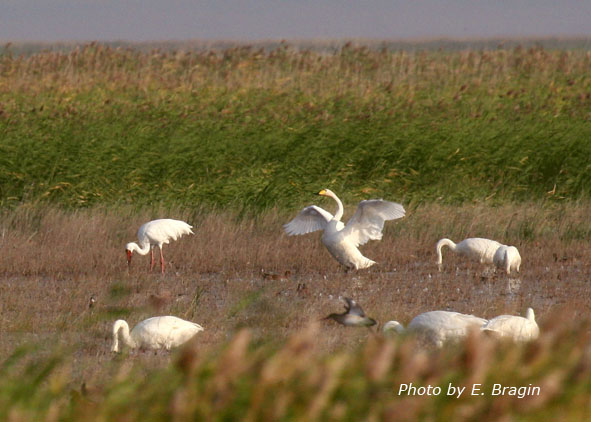 Few stopovers along the Central flyway include Ab-i-Estada and Dasht-e-Nawar in Afghanistan, and Zhob Valley in Pakistan. Few sightings were recorded in Uzbekistan and Turkmenistan.

Along the western flyway significant stopovers include the Volga River Delta (Astrakhan Nature Reserve and Agrakhansky Wildlife Refuge (Dagestan) in Russia, and the Sharabad Cape (to the north from Baku), Shirvan Steppe National Park, and Kurinskaya Kosa in the Kyzyl-Agachsky Nature Reserve in Azerbaijan.

The Central Asian Flock wintered on the Gangetic floodplain in Keoladeo (Ghana) National Park, Bharatpur, in the state of Rajasthan, northwest India. Winter counts at KNP have indicated a steady decline from about 80 birds in the 1960s to just a single pair in winter 2001/02 (numbers of birds were higher in some reports: 200 in 1964-65, according to Walkinshaw 1973, and 100 in 1967-68 according to Sauey 1985). In the winter of 2001/02 one pair was observed for the last time on the wintered grounds in India.

After the discovery of the wintering site of Western Asian flock in the Fereydoon Kenar in Iran in 1978, the Siberian Crane numbered between 9-14 birds until the late 1990s, and usually included one or two juveniles. Within the large trapping area (damgah) near Fereydoon Kenar, pairs defended large territories against the intrusion of other cranes. It appeared that the damgah could support only three to four pairs. The smaller damgahs did not support territorial pairs suggesting they might not be large enough for such a function. However, these damgahs were often used as feeding and roosting sites by non-territorial cranes, which were perhaps unpaired and sub-adult birds. The small damgahs are also used if the cranes are frightened from the large damgah. 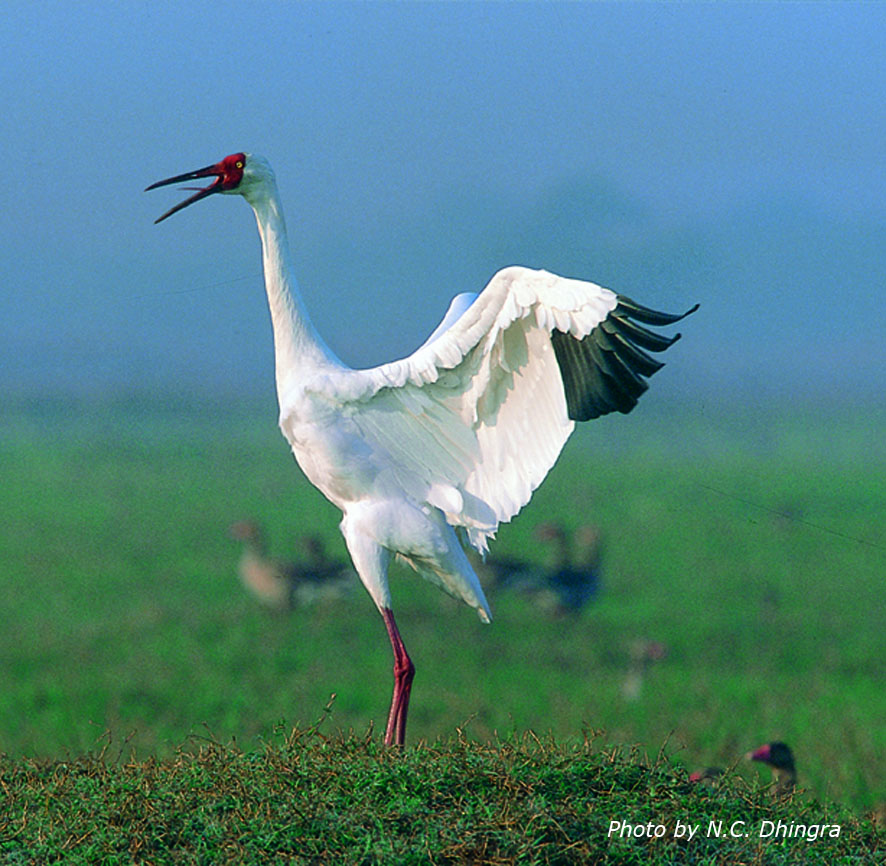 Due to various factors such as the space demands of the cranes, mortality, illegal hunting, and habitat destruction, the population not only failed to increase above 9-14 birds, but then started to decline. A male marked with a PTT in early 1996 was only seen in Iran again during the winters of 1996-1997. One adult female marked on the breeding grounds in 1996 was seen on the wintering grounds for four years, one year in company with a marked juvenile. The population declined to 9 birds in 1996-1997 and 1997-1998 (2 marked birds), 7 in 1998-1999 (1 marked bird), 5 in 2000/01 (1 marked bird), and just 3 adults during the winters of 2001/02 and 2002/03 (no marked birds) and 3 adults and one juvenile in 2003/04. In 2004/05 again 3 adults (a pair and a single bird) spent the winter at Fereydoon Kenar, but only two single cranes arrived in autumn of 2005. In autumn of 2006, again two single Siberian Cranes arrived on the wintering grounds, but one crane disappeared in January 2007. In 2007/08 and 2008/09 only one wild Siberian Crane wintered in Iran. Aerial surveys over other wetlands in Mazandaran Province in 2000 failed to find Siberian Cranes. Comprehensive ground surveys in both Gilan and Mazandaran Provinces in 2000 and in 2003 also failed to locate cranes, and annual midwinter waterbird counts across the South Caspian lowlands have not found any.