Meetings Marathon in Run-Up to COP13 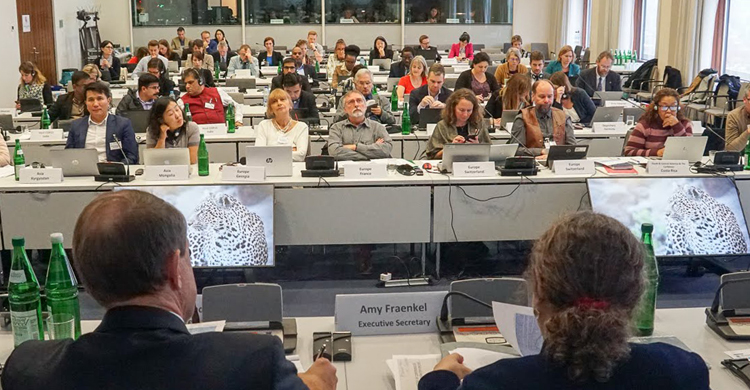 Bonn, 19 December 2019 – It has been a busy time for the UNEP/CMS Secretariat, which organized and hosted a series of meetings in preparation of the CMS Conference of the Parties (COP).  The CMS COP, which is taking place in Gandhinagar, India in February next year, is occurring at a most opportune time with new global biodiversity framework under negotiation.

The meeting took place on 11 November and was co-hosted by the CMS Secretariat and the IUCN Beyond the Aichi Targets Task Force and was attended by representatives from governments, multilateral environmental agreements, non-governmental organizations and other experts.

Agreement was reached on a definition of ecological connectivity - the unimpeded movement of species and the flow of natural processes that sustain life on Earth – and this definition will be promoted by CMS, the Ramsar Convention, the United Nations Convention to Combat Desertification and the IUCN, which will include it in its guidelines. Options were considered for how best to reflect connectivity in the post-2020 global biodiversity framework, which is expected update or replace the Aichi Targets.

Fourth Meeting of the Sessional Committee of the Scientific Council

In its last meeting before COP13, the Sessional Committee of the Scientific Council had several major tasks to deal with over four days.  These tasks included assessing the proposals to add species to the CMS Appendices, reviewing progress in the consolidated Concerted Action programme (both existing activities and proposed new ones) and commenting on the large number of COP-documents with scientific content.

The transition from the old system, under which the entire membership of the Scientific Council used to meet to the new arrangements with the streamlined Sessional Committee was completed at this meeting, with the definition of a process to undertake periodic reviews of the subject areas covered by the nine COP-appointed Councillors, who are members of the Committee.

The Secretariat informed the Sessional Committee of progress in compiling a report on the conservation status of migratory species listed on CMS Appendices, which should inform decisions by the COP on future action to address the causes of migratory species decline and could serve as an important measure of the effectiveness of the Convention. A working group was established to assist the Secretariat in taking the project forward.  The Secretariat also reported on progress in the development of an atlas of animal migration, which is being facilitated by a substantial grant from the Italian Government.  Further consideration was given to how to develop further modules to achieve global coverage.

It was also the last meeting of the Scientific Council to be chaired by Fernando Spina of Italy, who has been a stalwart supporter of the Convention for many years.  As well as making his scientific expertise available to the Convention and hosting and fundraising for meetings, his skills as a singer have been demonstrated as a member of the Corale Lirica San Rocco, which has performed at benefit concerts in celebration of World Migratory Bird Day for the past seven years. Dr Spina is also one of very few people still actively involved in the Convention to have attended the very first COP in October 1985.

49th Meeting of the Standing Committee

The 49th meeting of the Standing Committee took place on Tuesday, 19 November and was preceded on Monday, 18 November by the meeting of the Finance and Budget Sub-Committee.  The Secretariat reported on the state of the Convention’s finances and presented budget options for the 2012-23 triennium.  Parties were asked to consider candidates for positions on the Standing Committee and Sessional Committee, with Australia proposing some amendment to the areas of expertise of the nine COP-appointed Councillors, which have remained virtually unchanged since 1999. The Indian delegation gave a presentation on the progress in the preparations for COP13.

While the CMS Secretariat has organized pre-COP meetings in the past, this year was the first time that five regional meetings were held simultaneously, allowing participants to meet their counterparts not only from their regional neighbours but from Parties worldwide.  With the meetings being held at the CMS premises in Bonn, participants were also able to interact with all Secretariat staff.  Over seventy representatives of Parties attended the meetings and their reaction was overwhelmingly positive, with many saying that they were now much better prepared to participate in the COP next February.  The pre-COP meetings were made possible thanks to a financial contribution from the European Commission while simultaneous interpretation was provided by the Government of Germany.

The European Commission were recognized as Champion Plus for their generous support and commitment towards Building Capacity for Migratory Species Conservation for the period 2018-2020. This activity has been funded with the contribution granted by the European Commission under the Migratory Species Champion Programme and through the Global Public Goods and Challenges (GPGC Programme) Cooperation Agreements with UNEP.