How to become a Party 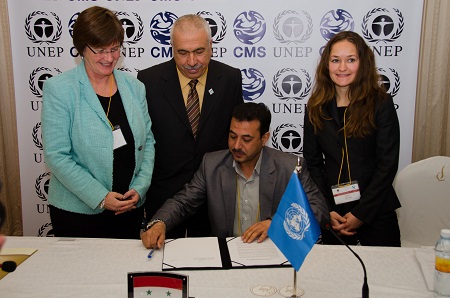 Generally, a State becomes a Party to an international convention when it deposits its instrument of ratification, acceptance, approval or accession to the convention with the depositary (Vienna Convention on the Law of Treaties, 1969, Art. II (b)).

Accession is the act whereby a State undertakes to become a party to a treaty already negotiated and signed by other States, but which, after a certain date, has been closed for signature. It has the same legal effect as ratification.

CMS enters into force for the acceding country on the first day of the third month after the country has deposited its instrument of accession to the Convention with the Depositary (Art. XVIII (2)). In the case of CMS, the Depositary is the Government of the Federal Republic of Germany (Art. XVI).

The attached guidelines describe the process of accession and are available in English, French and Spanish.

Accession Guidelines - How to Become a Party to CMS