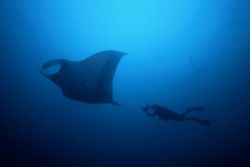 Bonn,
13 January 2012 - Following the proposal of Ecuador
the Giant Manta Ray (Manta birostris) was listed on CMS
Appendices I and II at COP10 (20-25 November 2011). As a
result, harvesting of this giant filter feeder with wingspans
of up to 6.5m is now no longer permitted internationally.
Exceptions include traditional subsistence users. Since
2011 this highly migratory ray has been listed as vulnerable
under the IUCN Red List due to growing exploitation both
directly for gill-rakers and other body parts and indirectly
as bycatch. Illegal trade in manta parts to Asiatic markets
is a concern. Similar to other Elasmobranchs, mantas have
a low reproductive rate, which makes them particularly vulnerable
to overexploitation. It is suspected that Giant Manta Rays
have declined by as much as 80% in some regions over the
last three generations (approximately 75 years) and by more
than a third globally.

Only recently has the circumglobal Giant
Manta Ray been identified as a separate species. There are
now considered to be two species within the Manta genus:
Manta birostris and Manta alfredi, the latter of which does
not migrate. Giant Manta Rays occur in subtropical and tropical
regions, mostly in the open ocean, but also in coastal regions
where they have become a major attraction for diving tourists.
Giant Manta Rays are capable of huge migrations; recent
tagging has shown one individual swimming approximately
1,100 km. Mantas are filter feeders and at times come together
in large aggregations to feed or reproduce. However much
of their life history remains a mystery and it is not known
how many there are globally. CMS Parties are encouraged
to fill these gaps in knowledge urgently in order to understand
how the species can be conserved most effectively.

Giant Manta Rays tend to return to the
same places, such as cleaning stations, thus the identification
and protection of these critical sites is a key priority.
An international management plan is needed to coordinate
the management of this migratory species which is not only
at home in coastal waters, but also in the High Seas, which
are outside of national jurisdiction.