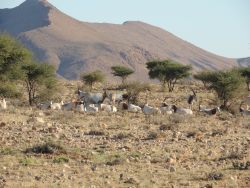 Bonn,
9 May 2013 - During a meeting of the Sahelo-Saharan
Interest Group (SSIG) in Agadir, Morocco, 2-4 May 2013,
the role of CMS in catalyzing action for the conservation
of the region’s antelopes was highlighted. This group
of species includes taxa severely threatened such as the
Addax or the Dama Gazelle, while other species such as the
Scimitar-Horned Oryx are already extinct in the wild and
reintroduction from captive stock is the only way to restore
them to their original habitat.

Since 1994 CMS has been leading a major
concerted action for Sahelo-Saharan Antelopes. The aim of
this concerted action is to rehabilitate this group of large
mammals in order to foster conservation and sustainable
development in the region. The program was initially proposed
by the Scientific Council of the Convention and then adopted
by the Conference of the Parties in Nairobi in 1994. In
1998 an Action Plan was adopted by all the range states
at a special meeting in Djerba, Tunisia.

In order to implement this Action Plan,
two large projects have been developed over the last years,
the first one co-financed by the Fonds Français pour
l’Environnement Mondial (FFEM) over the period 2003-2010,
and the second one co-financed by the European Union (EU)
during the period 2006-2012. Funding for a phase III of
the programme has been granted by the Agence Française
pour le Développement (AFD).

One of the main milestones achieved by
this sustained conservation effort was the designation by
the Government of Niger of the Nature Reserve of Termit
tin Toumma, a huge protected area of 97,000 sq. km., which
is one of the last strongholds of desert biodiversity in
the region, including a remnant population of Saharan Cheetah.

During the meeting the widespread poaching
of gazelles in the region was highlighted, an activity that
before was done on camels and it is now done by organized
gangs that use motorbikes and 4x4 vehicles. There is also
a tradition of capturing baby gazelles for trade.

An interesting case study on elephant conservation
in Mali was presented showing how the Mali Elephant Project
of the Wild Foundation had responded to the seizure of the
north of the country by armed groups. Clan leaders and elders
had committed themselves to do all they could to prevent
poaching while young men were recruited to form vigilance
networks that gathered information on the elephant killings.
Six elephants were killed, but this was only a small fraction
of what could have been a massive slaughter.

The Sahelo-Saharan Interest Group is a
group of like-minded organizations which is concerned with
the conservation of biodiversity in Sahara. The SSIG meeting
is a forum for all those working in wildlife conservation
within the arid areas of North Africa and the Middle-East
which has met annually since its inception in 2001. The
meeting provides an opportunity to bring people together
to share ideas and projects, and to continue a strong tradition
of collaboration on behalf of Sahelo-Saharan wildlife and
people. The meeting is facilitated by the Sahara Conservation
Fund and the meeting format includes a series of presentations
and discussion groups covering a range of topical issues.

The photograph was kindly provied by A.
Jebali.