The third competition was launched on July 2010 with the closing date for applications set at 15 April 2011. Sixty-one entries were received from twenty-five different countries. The jury met on 20th September and chose Dr Lucy King's thesis on "the interaction between the African elephant and the African honey bee and its potential application as an elephant deterrent" as the winner. The prize was awarded at the CMS COP in Norway in November. 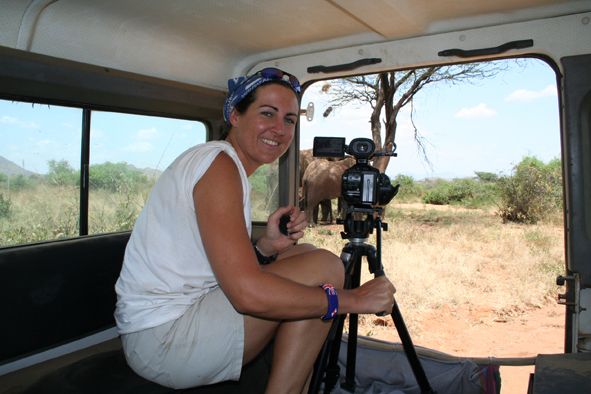 Dr Lucy King joined Save the Elephants’ Kenya team in 2006 as a graduate from Oxford University to investigate one of the most serious and constant underlying threats to the African elephant, that of increased habitat fragmentation and a rise in human-elephant conflict (HEC). Farmers living next to wildlife reserves and national parks rarely benefit from the revenue generated by tourists to the parks and are often left on their own to cope with wildlife straying onto their land, damaging crops and property.

Dr King’s research looked deep into the natural work for a solution to HEC and over the years she has made several groundbreaking discoveries in her understanding of how African elephants react to the natural threat of African honey bees. Her published findings in top scientific journals reveal that not only do elephants run away from disturbed bees but when doing so they head shake, dust themselves, and emit a unique low frequency rumble that warns other elephants in the area to retreat. This in-depth understanding of elephant behaviour led her to invent and successfully field-test a novel “beehive fence” which protects small farms from crop-raiding elephants.

The beehive fence mitigation method succeeds because it doesn’t block elephant corridors like traditional electric fences do, they simply surround and protect individual farms, enabling elephants to still migrate through patchworks of farm land. The vision behind the beehive fences is to enable farmers to live successfully with their elephant neighbours and to engage even the poorest farmers in self-managed deterrent systems that do not rely on rangers or researchers to maintain.

The beehive fences not only reduce damaging crop raids but also provide the farmers with “Elephant-Friendly Honey” and pollination services, increasing yield and sustainable income for their families. Beehive fences have now been included in the Action Points of the new Conservation and Management Strategy for the Elephant in Kenya 2012-2021 and there is every chance that it can become a significant contribution to the toolbox of human-elephant conflict mitigation methods for managing free-ranging elephant populations in the country.

Dr King has now taken the beehive fence technology to both Botswana, working in partnership with the Department of Wildlife and National Parks (World Bank GEF funding), and to Mozambique in partnership with The Niassa Carnivore Project. She also provides online support and technical advice to researchers and managers in Tanzania, Uganda, Sri Lanka and India who are establishing their own beehive fences. Dr King’s project has gathered global interest including the UNEP/CMS Thesis Award in 2011, The Future for Nature Award 2013 and The St Andrews Prize for the Environment 2013 which has enabled her to build an Elephants and Bees Project office, honey processing room and training centre next to Tsavo East National Park. As a consequence, many more communities and researchers can now visit the project and learn about how to implement the beehive fence method in their own communities. For more information visit www.elephantsandbees.com.