The breeding grounds of the eastern population are relatively undisturbed. Long-term monitoring and analysis of satellite imagery for Kytalyk Republic Resource Reserve (RRR) have revealed an increase in the area of large lakes, inundating surrounding land used as breeding habitat by the Siberian Crane, which may be attributable to climate change. As a result, some breeding habitats located near the lakes have disappeared and this process is continuing. However, taking into account that the huge tundra area includes extensive suitable breeding grounds, this factor is not considered to be an immediate threat. Oil exploration and development pose a significant threat in Yakutia as well as in Mongoliain unprotected Siberian Crane habitats, as the cranes are sensitive to the human disturbance associated with this industry, which is nearly impossible to control.

In Russia, the staging areas in the Aldan River basin of southern Yakutia are coming under increasing pressure from economic development. These include seismic testing for oil and gas deposits which may affect Kyupsky RRRR, the development of oil and gas pipelines, and a major hydro-electric generation scheme in the headwaters of the Aldan which may affect the hydrological regime. Overhead power transmission lines will cross the migration route at Kyupsky, and mitigation measures are currently being designed to reduce the risk of bird mortality. Road and railway development plans will further open up pristine natural areas. 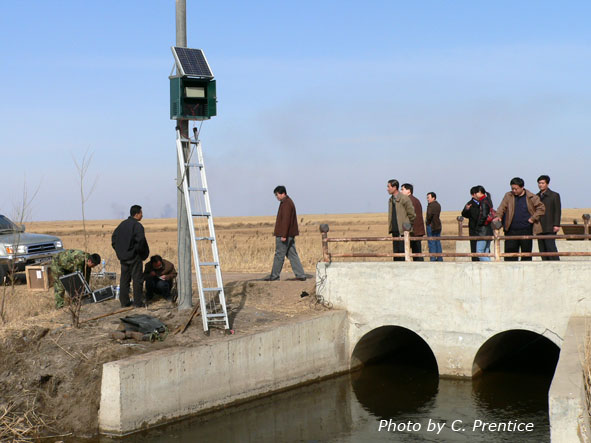 Wetland conservation is already an enormous challenge in China. A complex of four large wetlands in northeast Chinaprovides vital resting areas for Siberian Cranes in both autumn and spring. Since the 1950s, approximately 90% of the wetlands in northeast China have been destroyed to create farmland in the area the Chinese refer to with pride as their Great Northern Food Basket.

Loss of wetlands due to drought during recent years and the effects of water regulation and diversion is the other main threat along the Siberian Crane flyway in China.  On the other hand, Wolong and Huanzidong Reservoirs offer extensive shallow habitats due to lower water levels in the impoundments. Additional threat comes from human disturbance, including net fishing, harvesting of reeds, and other activities by local people and also outside investors.

Although several of the Eastern population’s major staging areas in north-eastern China are protected by national nature reserves (NNR) (principally the Zhalong, Momoge, Xianghai and Keerqin NNRs), many others in the flyway remain unprotected.  Attempting to conserve what remains of these wetlands is a significant challenge for conservationists.

Special attention should be given to Poyang Lake, where most Siberian Cranes spend the winter. Currently Poyang Lake NNR accounts for only 6% of the total lake basin, and Siberian Cranes increasingly move outside the reserve.  Additional wetlands in the basin have been protected by the establishment of new reserves, but management of these areas is still weak; additional protected areas are planned. In recent years, more Siberian Cranes have been observed inDongtingLake. Monitoring and habitat assessment for Siberian Cranes should be undertaken at Dongting Lake.

The most important threat at Poyang Lake has been the construction of the Three Gorges Dam on the Yangtze River as well as large numbers of dams on the Gan and other rivers that feed Poyang Lake from the south.  These structures almost certainly are affecting the water levels in Poyang Lake basin during the wintering period for the Siberian Crane and hundreds of thousands of other waterbirds.  On-going development in Jiangxi is likely further to affect water availability and thus water levels and timing of water fluctuations that determine the extent and distribution of shallows and mudflats in the Poyang Basin.  In addition, a proposal by the Jiangxi provincial government to create a water control structure at the outlet of Poyang Lake is currently under review. This project could have highly significant impacts on the Siberian Crane if the crane’s ecological requirements are not fully taken into account. Comprehensive research at Poyang Lake on the relationships among crane distribution, water depth, turbidity and the production of plants on which Siberian Cranes feed in winter is helping to elucidate potential effects of these developments, and its results have been used to inform decision-makers considering development proposals at Poyang.

The breeding grounds in West Siberia are relatively remote and human pressures are generally low, mainly consisting of hunting, fishing and forest product collection. However, oil and gas exploration activities are beginning in the breeding grounds of the Western Asian flock in Konda-Alymka Interfluvial Area, and the resulting human disturbance and potential impacts on habitats in the longer term are a significant threat. 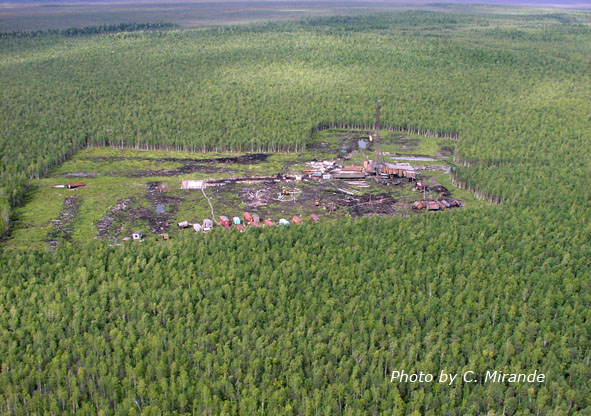 Around the staging areas in the Armizon District of Tyumen Region (Russian Federation) and northern Kazakhstan, agricultural development was significant in the past. However, this has declined and there is a current window of opportunity to secure areas for conservation. Privatization of farmland in Armizon has resulted in increasing waterbird-crop damage conflicts. Disturbance from agricultural, hunting and fishing activities are the main issues at these sites at present. Disturbance associated with potential development of a hunting lodge is also a risk and negotiations are in progress to expand the protected area while locating hunting activities in areas that will not impact the migrating birds.

Many pressures affect the Volga Delta (including significant hydrological effects of the Volgograd Dam), industrial pollution, oil pollution, intensive agriculture, fires as well as sport hunting and fishing activities. Changes in the level of the Caspian Sea have had a profound impact on the delta and its birdlife. Overall, it can be concluded that current pressures on wetland habitats in the staging areas are relatively light, with the exception of the Volga Delta.

Hunting is perhaps the most immediate and serious threat to the restoration of Siberian Cranes in West Asia. The main threats to Siberian Cranes arise from wide spread legal hunting in Afghanistan and illegal hunting in Kazakhstan, Pakistan, Russia, Uzbekistan, and Turkmenistan, which are attributed to poor awareness among local people and poor living conditions.

The loss and degradation of wetland habitats is a growing concern resulting from recent declines in water levels due to climate change and prolonged drought. Besides, recent economic growth in Kazakhstan and other Central Asian countries is placing greater pressures on wetlands and water resources as, for example, water diversion from illegal dams at Naurzum Nature Reserve. Habitat changes have also been attributed to specific factors such as fires in northwest Kazakhstan.

Siberian Cranes are strictly protected on wintering grounds in India. However water management at Keoladeo National Park arose in a huge problem due to few drying season in recent time.

At the main wintering site in Fereydoon Kenar in the Islamic Republic of Iran, Siberian Cranes habitats located in area with high density human population who use the area for commercial duck trapping and shooting. Much of the Caspian lowlands, including both natural wetlands and rice field areas, is under pressure from urban development as a result of rapid tourism growth. The remaining habitats at Ezbaran and Fereydoonkenar are privately owned and dependent on the goodwill of local rice farmers and the persistence of the traditional livelihood of duck trappers who restrict hunting. Siberian Cranes are safe inside damgah as entrance is strictly protected to avoid waterbirds disturbance and trapping failing. However, toward the end of each season, when duck-netting becomes unprofitable, the trapping area is opened up to hunting with guns in a massive “shoot-out”. There is a potential threat that Siberian Cranes could be shot accidentally.